The U.S. Supreme Court on Monday left in place Hawaii court rulings that found a bed and breakfast owner violated the state's anti-discrimination law by refusing to rent a room to a lesbian couple.

The justices rejected an appeal from Aloha Bed & Breakfast owner Phyllis Young, who argued that she should be allowed to turn away gay couples because of her religious beliefs.

"Mrs. Young will rent a bedroom in her home to anyone, including those who are LGBT, but will not rent to any romantic partners other than a husband and wife," her attorney, James Hochberg, said in a statement. "This kind of governmental coercion should disturb every freedom-loving American no matter where you stand on marriage." 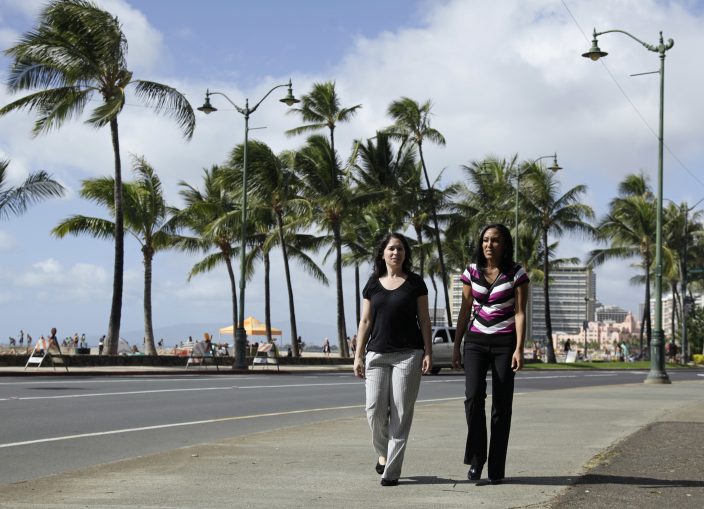 FILE - In this Dec. 19, 2011 file photo, Diane Cervelli, left, and Taeko Bufford, right, walk past Waikiki beach in Honolulu. The U.S. Supreme Court is rejecting an appeal from a Hawaii bed and breakfast that wouldn't rent a room to the lesbian couple. The justices on Monday, March 18, 2019 left in place Hawaii state court rulings that found the Aloha Bed & Breakfast in Honolulu violated Hawaii's anti-discrimination law by turning the couple away. Owner Phyllis Young had argued she should be allowed to turn away gay couples because of her religious beliefs. (AP PhotoEric Risberg, File)

The case involved an effort by Diane Cervelli and Taeko Bufford of Long Beach, California, to book a room at Aloha Bed & Breakfast in 2007 while they were visiting a friend nearby.

When they specified they would need just one bed, Young told them she was uncomfortable reserving a room for lesbians and canceled the reservation.

Young told the commission she is Catholic and believes that homosexuality is wrong, according to the appeals court ruling.

The commission found the business illegally discriminated against the couple and issued Cervelli and Bufford "right to sue" notices.

"The freedom of religion does not give businesses a right to violate nondiscrimination laws that protect all individuals from harm, whether on the basis of race, gender, or sexual orientation," Peter Renn, an attorney who represents the couple, said in a statement.

Last year, the Hawaii Supreme Court rejected Young's appeal of a lower court ruling that ordered her to stop discriminating against same-sex couples.

Jack Flaherty is getting the ball ...