"That's not real Mexican food," ''My grandma would slap you" and "sellout" are just some of comments Jose and Leticia Gamiz received when they started their pop-up vegan Mexican food business, Mi Vegana Madre, four years ago.

People saw them doing something new and took it personally, Jose Gamiz said. "We even had somebody write (online) in Spanish, 'They're probably not even Mexican.'"

Despite the haters, the couple's meat- and dairy-free endeavor has built a following. It's part of a growing vegan Mexican food industry in the U.S. that has seen Latinos take control of the kitchen and plant-based Mexican cuisine increasingly plant roots in areas with large Latino communities. 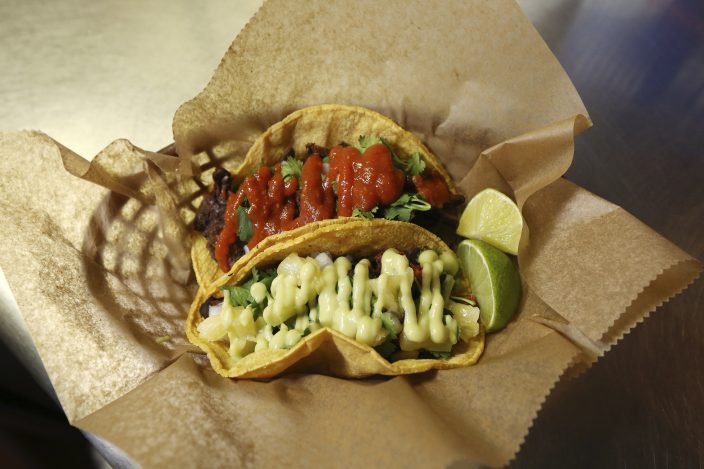 In this Thursday, Oct. 10, 2019 photo, fresh tacos served up at the Mi Vegana Madre restaurant offering Mexican vegan food in Glendale, Ariz. No longer just a few items on a mainstream restaurant’s menu, vegan Mexican food has become a widening industry on its own with Latinos taking control of the kitchen. (AP PhotoRoss D. Franklin)

Las Vegas and Austin, Texas, each have at least a few eateries or food trucks that are exclusively vegan Mexican. Across Southern California, there are a slew of options, including a vegan panaderia peddling traditional pastries.

The vegan Mex wave now seems to be sweeping Arizona.

Mi Vegana Madre expanded into a brick-and-mortar restaurant in the Phoenix suburb of Glendale last year. It offers vegan takes on carne asada, al pastor and nachos with a cashew cream-based cheese sauce. Another restaurant offering vegan Mexican and Mediterranean dishes opened in January a half-mile away. In September, a third place opened in Phoenix, also led by a Mexican American family. 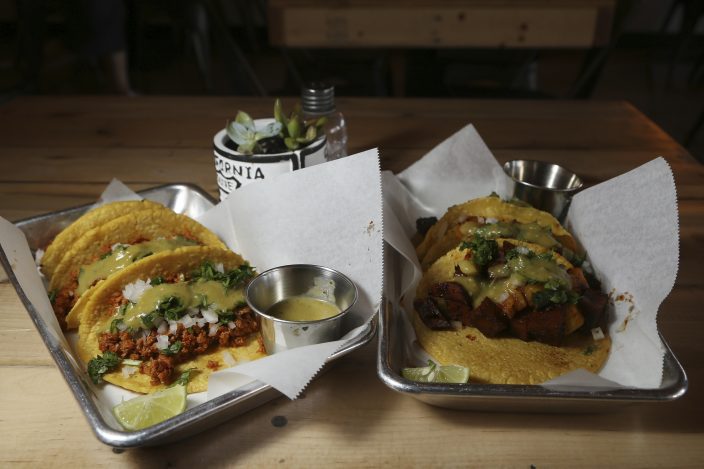 In this Friday, Oct. 18, 2019 photo is two of the taco selections at the Earth Plant Based Cuisine restaurant in Phoenix. No longer just a few items on a mainstream restaurant’s menu, vegan Mexican food has become a widening industry on its own with Latinos taking control of the kitchen. (AP PhotoRoss D. Franklin)

The sisters and their parents have been vegan for nearly five years, and it was Keren's dream to open a vegan restaurant. It just so happened a space became available and a family friend was willing to be a financial partner.

While most American vegan restaurants offer a few basic Mexican-inspired items, the Gamiz and Aguilar families are trying to capture the array of recipes they grew up on. 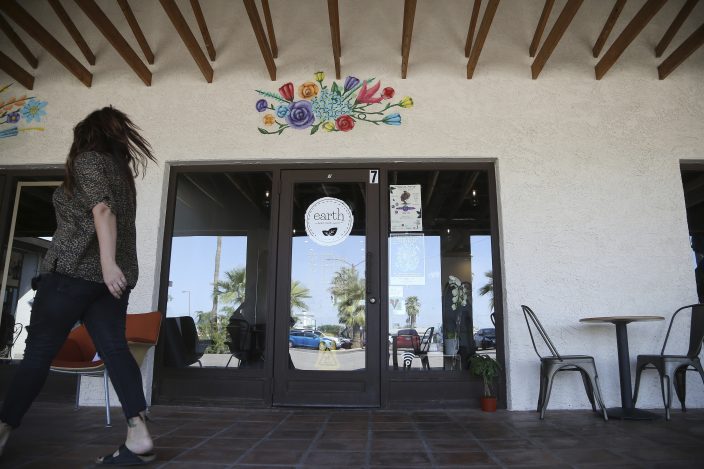 In this Friday, Oct. 18, 2019 photo, is the entrance of Earth Plant Based Cuisine vegan Mexican restaurant in Phoenix. No longer just a few items on a mainstream restaurant’s menu, vegan Mexican food has become a widening industry on its own with Latinos taking control of the kitchen. (AP PhotoRoss D. Franklin)

"We didn't want it to have a 'vegan taste' or be bland. We wanted it to have flavors, so our spices are very important to making it Mexican," Keren Aguilar said.

Gustavo Arellano, a Los Angeles-based columnist and author of "Taco USA: How Mexican Food Conquered America," said restaurants like Earth Plant Based Cuisine are bringing a level of authenticity beyond the "hippy dippy white vegan stuff like tempeh, or they get a taco and put cubes of soy in it."

Arellano believes vegan food in Mexican and Hispanic cultures has blossomed as younger generations became inspired by ways they can cut animal products from cooking. 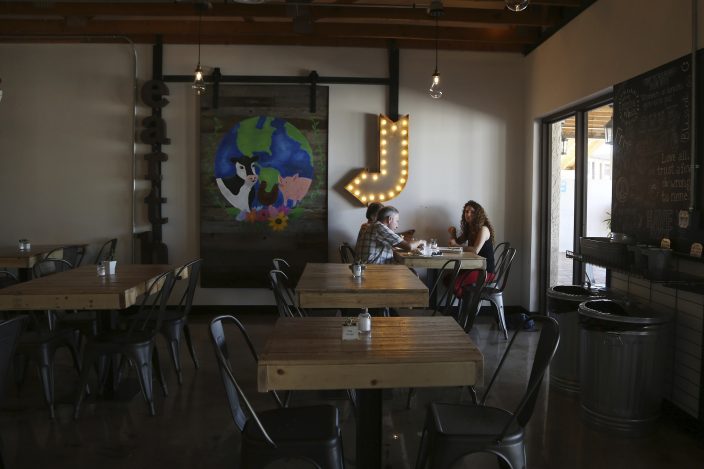 In this Friday, Oct. 18, 2019 photo, patrons dine at the Earth Plant Based Cuisine restaurant serving up Mexican vegan food in Phoenix. No longer just a few items on a mainstream restaurant’s menu, vegan Mexican food has become a widening industry on its own with Latinos taking control of the kitchen. (AP PhotoRoss D. Franklin)

"What blew up the vegan Mexican movement was these pop-up vegan food fairs where you have not just Mexicans, but Central Americans," Arellano said.

Since opening their sit-down locations, both family-owned restaurants have also noticed Latinos of a certain age sampling the food. Jose Gamiz recalls wrongfully assuming a father and daughter, both Mexican, were frequent patrons because the girl was vegan.

"(The father) said, 'I started doing it for my health,' and he was like, 'Nobody in my family will follow me except for my daughter,'" Gamiz said. "Usually the men in the family are the ones that are more resistant. I think there's a misconception that you need meat to be manly." 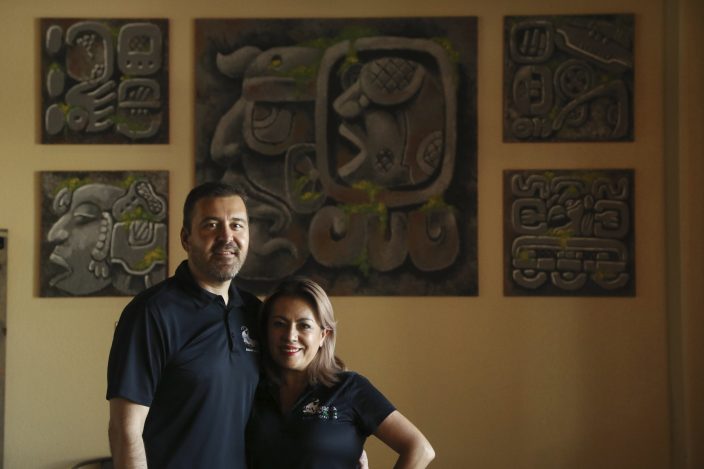 In this Thursday, Oct. 10, 2019, photo, Jose and Leticia Gamiz, owners of the Mi Vegana Madre restaurant, stand inside the dining area of their vegan Mexican restaurant in Glendale, Ariz. (AP PhotoRoss D. Franklin)

Adults in the U.S. have a 40% chance of getting type 2 diabetes, but Hispanic and Latino adults have more than a 50% chance, according to the Centers for Disease Control and Prevention. Hispanics/Latinos also are at greater risk of developing diabetes at a younger age and getting complications like kidney failure and vision loss. The CDC says some of the factors contributing to this are genetics and the cultural value in eating meals high in fat and calories.

Yet for some Latinos, going sin carne can still feel like a sin. Linda Sepulveda, of Albuquerque, New Mexico, which has virtually no all-vegan Mexican restaurants, would find it hard to give up an omnivore's life. Her house is always stocked with ground beef, tortillas and salsa.

"I'm intrigued by (vegan Mexican), but I think a part of me knows it won't taste the same," she said. "We are always trying to find where we can add veggies, but there always has to be a main meat and everything else dresses it up." 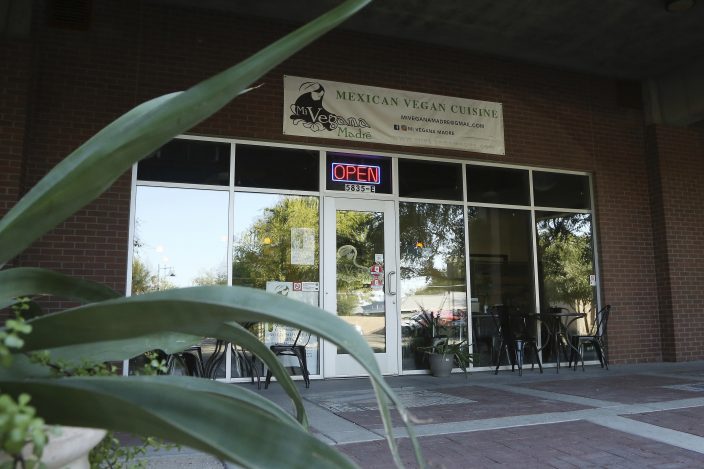 While some may say veganizing is misappropriating Mexican food, the country's indigenous natives actually ate mostly plant-based foods, according to Arellano. Colonizers from Spain irrevocably altered the food culture with introductions of beef, lamb and pork.

"They don't realize, if you're real Mexicans, you're not supposed to be eating this meat in the first place because colonizers brought it over," Arellano said. "I eat everything, but I'll eat vegan Mex if it's good."

Terry Tang is a member of The Associated Press' race and ethnicity team. Follow her on Twitter at https://twitter.com/ttangAP 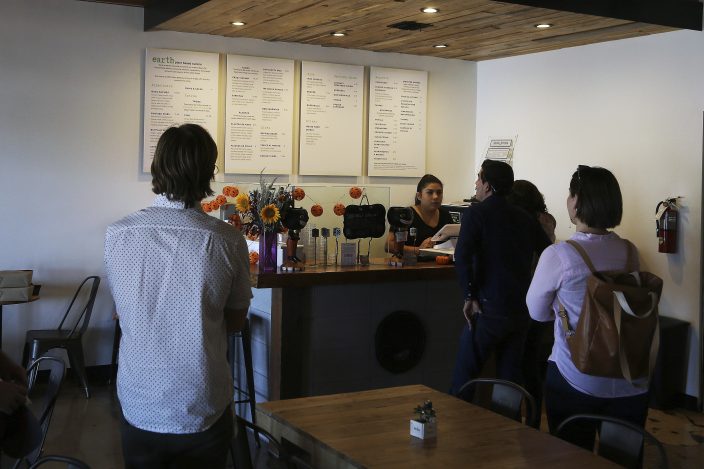 In this Friday, Oct. 18, 2019 photo, patrons line up to place their orders for Mexican vegan food at the Earth Plant Based Cuisine restaurant in Phoenix. In recent years, plant-based Mexican cuisine has been planting roots in areas with large Latino communities and doesn’t seem to be slowing. (AP PhotoRoss D. Franklin)