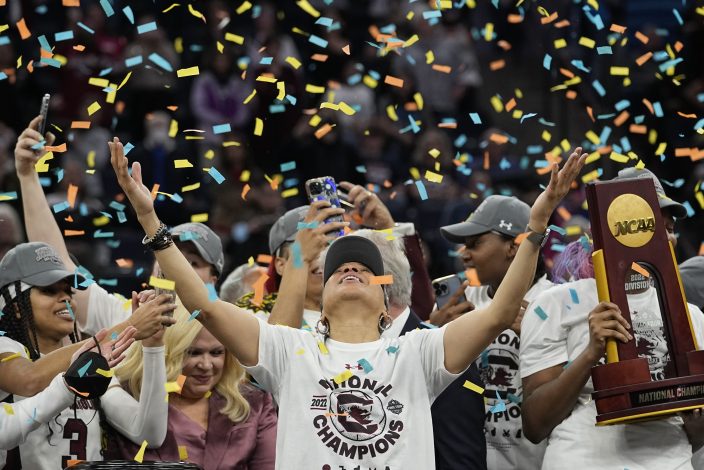 UKRAINE WAR REFUGEES INTEGRATION — Having escaped from Russian shelling, Ukrainian refugees are now focused on building new lives — temporarily or permanently. Countries neighboring their homeland, like Poland and Romania, are sparing no effort to help them integrate and feel needed in the new environment. By Monika Scislowska and Stephen McGrath. SENT: 940 words, photos. Also see MORE ON RUSSIA-UKRAINE WAR below. For full coverage. 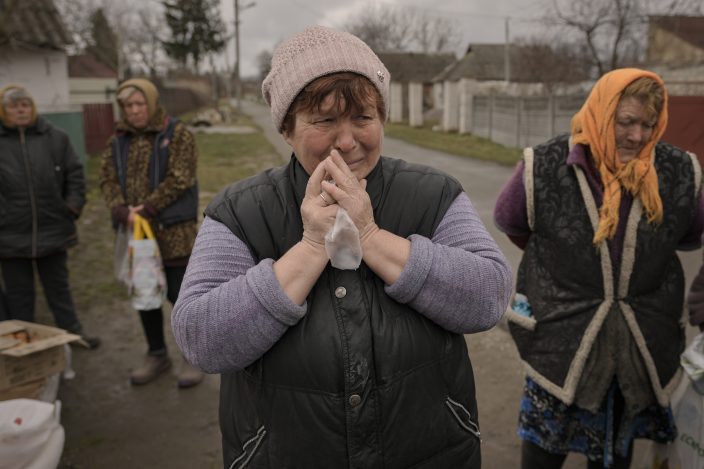 A woman cries while waiting along with others for distribution of food products in the village of Motyzhyn, Ukraine, which was until recently under the control of the Russian military, Sunday, April 3, 2022. (AP PhotoVadim Ghirda)

HONG KONG — Hong Kong leader Carrie Lam said she wouldn’t seek a second term after a rocky five years marked by huge protests calling for her resignation, a security crackdown that has quashed dissent and most recently a COVID-19 wave that overwhelmed the health system. Her successor will be picked in May and the city’s security chief during the 2019 protests is among the possible choices. By Zen Soo and Vincent Yu. SENT: 620 words, photos.

SACRAMENTO MASS SHOOTING — The usual crowds filled the streets as bars and nightclubs closed in the downtown section of California’s capital city of Sacramento when the sound of rapid-fire gunshots sent people running in terror. In a matter of seconds, the latest U.S. mass shooting had left six people dead and 12 wounded. Police were searching for at least two shooters and trying to determine a motive. By Adam Beam. SENT: 750 words, photos, video.

CONGRESS-SPENDING-HOME DISTRICT PROJECTS — Home-district projects for members of Congress are back, sprinkled across the government-wide $1.5 trillion bill that President Joe Biden signed recently. An analysis by The Associated Press finds there were 4,975 of them worth $9.7 billion in the measure. By Alan Fram and Aaron M. Kessler. SENT: 1,830 words, photos. An abridged version of 950 words is also available. This is the Tuesday Spotlight. 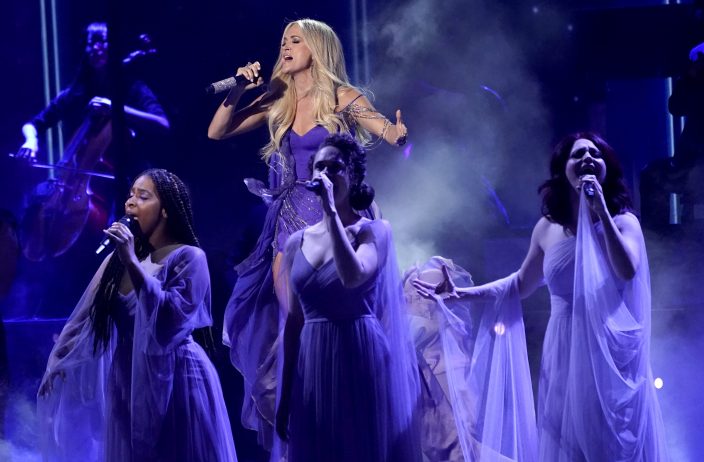 MUSIC-GRAMMYS — Jon Batiste won album of the year honors for “We Are” at the Grammy Awards, giving him five trophies on a night that saw the ’70s funk of Silk Sonic take record of the year and song of the year and newcomer Olivia Rodrigo take three awards. By Entertainment Writer Jonathan Landrum Jr. SENT: 1,220 words, photos, videos. With MUSIC-GRAMMYS-FASHION — Saweetie, Haddish lead Grammys red carpet in pink, sparkle; GRAMMYS-LIST. 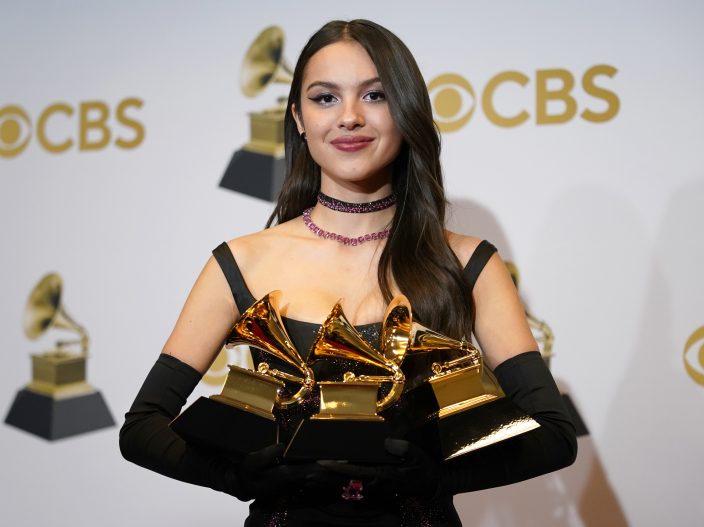 GRAMMYS-UKRAINE — Ukrainian president Volodymyr Zelenskyy appeared in a video message at the Grammy Awards to ask for support in telling the story of Ukraine’s invasion by Russia. SENT: 260 words, photo. 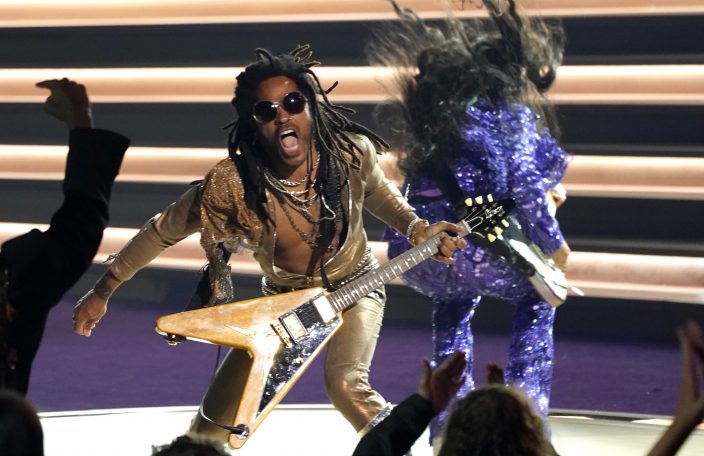 VIRUS OUTBREAK-CHINA — China has sent more than 10,000 health workers from across the country to Shanghai, including 2,000 military medical staff, as it struggles to stamp out a rapidly spreading COVID-19 outbreak in China’s largest city. SENT: 400 words, photos. 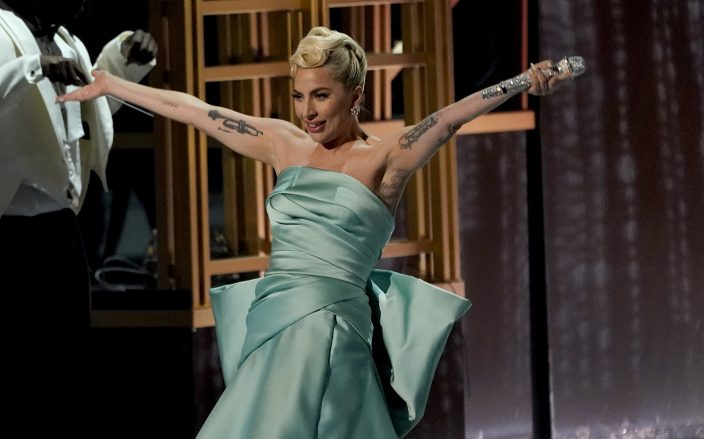 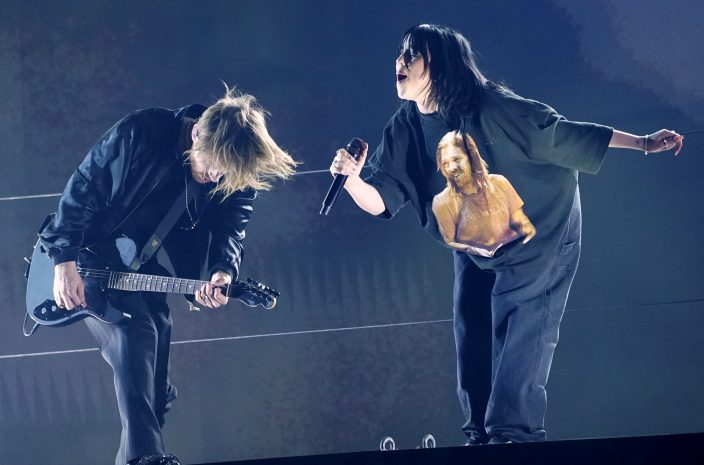 The late Taylor Hawkins appears on the shirt of Billie Eilish, right, as she and FINNEAS perform "Happier Than Ever" at the 64th Annual Grammy Awards on Sunday, April 3, 2022, in Las Vegas. (AP PhotoChris Pizzello) 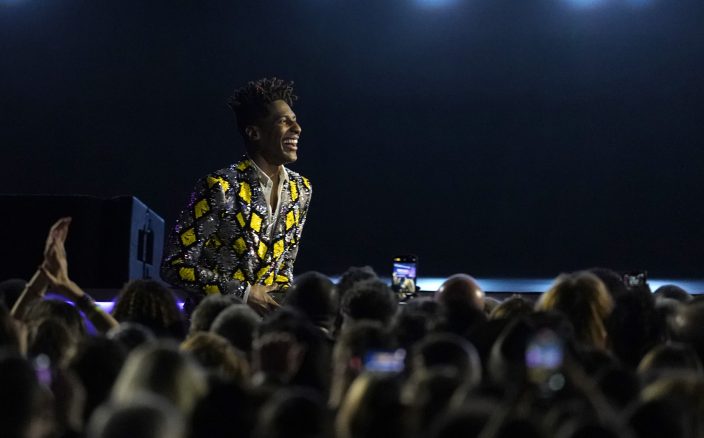 Jon Batiste is seen in the audience before going on stage to accept the award for best music video for "Freedom" at the 64th Annual Grammy Awards on Sunday, April 3, 2022, in Las Vegas. (AP PhotoChris Pizzello)

SUPREME COURT-NOMINATION — Democrats are launching a whirlwind week of votes and procedural maneuvers with the goal of confirming Ketanji Brown Jackson as the first Black woman on the Supreme Court by Friday. SENT: 620 words, photo. UPCOMING: 900 words after 10 a.m. committee meeting.

SCHOOLS-MENTAL HEALTH FIRST AID — A small but growing number of California teachers are learning how to spot warning signs of mental health risks and substance abuse in children, and how to prevent a tragedy. SENT: 1,820 words, photos. An abridged version of 840 words is also available.

CAPITOL RIOT-POLICE OFFICER — A trial starts this week for a former Virginia police officer charged with storming the U.S. Capitol with a fellow officer who has agreed to cooperate with federal prosecutors. SENT: 880 words, photo.

SCHOOL SHOOTING-FLORIDA — Jury selection in the deadliest mass shooting ever to go to trial will begin with preliminary screening for the panel that will determine whether Nikolas Cruz will be put to death for murdering 17 students and staff members at a Parkland, Florida, high school. SENT: 540 words, photos.

COSTA RICA-ELECTION — A former finance minister who surprised many by making it into Costa Rica’s presidential runoff vote has easily won that ballot and is to become the Central American country’s new leader next month, while still fending off accusations of sexual harassment when he worked at the World Bank. SENT: 750 words, photos.

SWEDEN-GREEN STEEL — Swedish steel giant SSAB has built a pilot plant to produce steel with hydrogen instead of coal. It’s part of shift in the industry that’s begun in Europe, as manufacturers try to reduce carbon dioxide from the metal in their supply chains. SENT: 850 words, photos.

CLIMATE-BIRD EGGS — Many species of birds are nesting and laying eggs nearly a month earlier than they did 100 years ago in the Chicago area and researchers believe climate change is behind it. UPCOMING: 300 words, photos, video by 6 a.m.