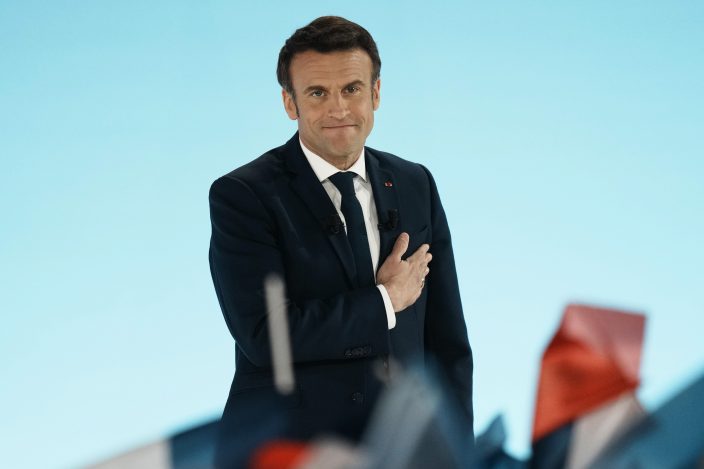 Current French President and centrist presidential candidate for reelection Emmanuel Macron puts his hands on his heart at his election night headquarters Sunday, April 10, 2022 in Paris. French polling agencies projected Sunday that incumbent Emmanuel Macron and far-right nationalist Marine Le Pen are heading for another winner-takes-all runoff in the French presidential election, with their fierce political rivalry and sharply opposing visions pulling clear of a crowded field of 12 candidates in the first round of voting. (AP PhotoThibault Camus)

RUSSIA-UKRAINE-WAR — A showdown looms in Ukraine after Russia appointed a new military commander and looked to concentrate its attacks on the eastern part of the country, while Ukraine’s president said his troops will hold their ground, urging Western leaders, in particular U.S. President Joe Biden, to do more. Ukrainian President Volodymyr Zelenskyy warned in his nightly address to the nation that this week will be as crucial as any during the war, saying “Russian troops will move to even larger operations in the east of our state.” By Adam Schreck and Cara Anna. SENT: 1,290 words, photos, video. With RUSSIA-UKRAINE-WAR-THE-LATEST. For full coverage.

FRANCE ELECTION — French President Emmanuel Macron may be ahead in the presidential race so far, but he warned his supporters that “nothing is done” and his runoff battle with far-right challenger Marine Le Pen will be a hard fight. And she’s ready for it. By Sylvie Corbet. SENT: 710 words, photos, video.

VIRUS OUTBREAK-MILITARY MEDICAL TEAMS — U.S. military medical teams deployed during the pandemic sought to relieve exhausted civilian medical workers and provide care to what seemed to be an endless crush of COVID-19 patients. With that mission over, at least for now, military leaders are taking stock so they will be better prepared for the next crisis risking a large population, whatever its nature. By Lolita C. Baldor. SENT: 1,060 words, photos.

CANCER BLOOD TEST — A new type of blood test that checks for cancer signals in healthy people is being marketed and sold. But it's still unclear whether these screening tests will make any difference in cancer death rates. By Medical Writer Carla K. Johnson. SENT: 1,000 words, photos, video.

VIRUS OUTBREAK-CHINA — The manufacturing hub of Guangzhou closed itself to most arrivals as China battles a major COVID-19 surge in its big eastern cities. SENT: 550 words, photos.

AFGHANISTAN-PAKISTAN-IS THREAT — A ruthless Islamic State affiliate, known as Islamic State in Khorasan Province or IS-K, arrived in eastern Afghanistan in 2014. It has morphed and grown say analysts until in 2022, despite a massive U.S. bombing campaign, the group is among the deadliest terrorist groups in a turbulent region that has spawned a cacophony of terrorist organizations, while also being victim to their brutal attacks. By Kathy Gannon. SENT: 1,100 words, photos.

BIDEN-GUNS — Biden is nominating a former U.S. attorney to run the Bureau of Alcohol, Tobacco, Firearms and Explosives, as his administration unveils its formal rule to rein in ghost guns, privately made firearms without serial numbers that are increasingly cropping up at crime scenes, six people familiar with the matter told The Associated Press. By Michael Balsamo. SENT: 750 words, photos, UPCOMING: White House event scheduled for 2:15 p.m.

THE LAST KMARTS — There were once well over 2,000 Kmarts in the U.S. Only three will remain after a one of the last ones standing closes its doors in a New Jersey suburb this week. SENT: 980 words, photos, video.

MASTERS — Masters champions get to go to the Masters Club dinner, and Scottie Scheffler has a permanent seat at that table now. By Sports Writer Tim Reynolds. SENT: 900 words, photos. With MASTERS-SCHEFFLER-FAMILY — Scheffler’s journey to Augusta was a true family affair.

NBA AT 75-COMMISSIONER LOOKAHEAD — As part of The Associated Press series on the NBA’s first 75 years, Commissioner Adam Silver offered perspective on what the league could look like 25 years from now when it celebrates its 100th anniversary. By Adam Silver. SENT: 430 words, photos.