Bangladesh’s High Court granted bail Wednesday to a cartoonist who has been held for 10 months of pre-trial detention under a controversial digital security law that critics say stifles freedom of expression.

Ahmed Kabir Kishore faces charges of creating confusion over the government’s handling of the coronavirus pandemic and contributing to the deterioration of law and order in the country, but rights groups say the use of the Digital Security Act against him is a repressive measure.

Kishore is now in prison outside the capital, Dhaka, and his lawyer said he has been tortured in custody. 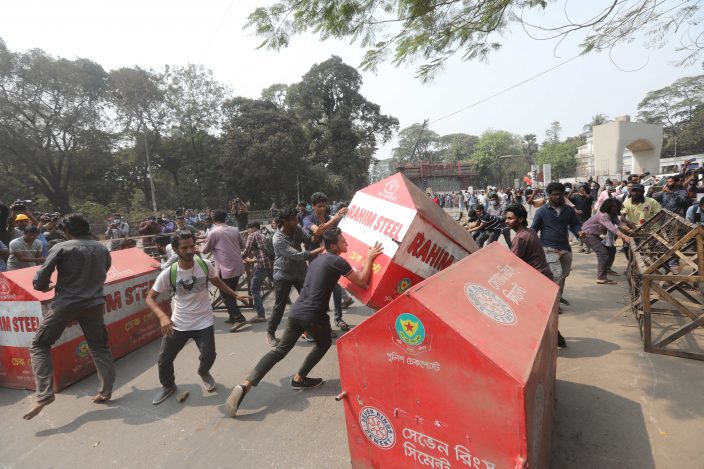 Bangladeshi students overturn security barricades outside the Home Ministry during a protest in Dhaka, Bangladesh, Monday, March 1, 2021.About 300 student activists rallied in Bangladesh’s capital on Monday to denounce the death in prison of Mushtaq Ahmed, a writer and commentator who was arrested last year on charges of violating a sweeping digital security law that critics say chokes freedom of expression. (AP PhotoMahmud Hossain Opu)

A two-member panel of judges from the High Court issued the order of his bail on health grounds, said his lawyer Jotirmoy Barua.

Barua told the court that Kishore's right ear was nearly impaired and a scar had developed on his left leg because of physical torture.

Wednesday’s bail decision followed an outcry by protesters in the streets and on social media after writer and commentator Mushtaq Ahmed died in custody last Thursday.

Both Kishore and Ahmed were arrested on May 5 last year in Dhaka in a single case under the Digital Security Act. Ahmed was arrested for making comments on social media that criticized the government’s handling of the pandemic. Ahmed had been denied bail at least six times. At least nine other people were also charged with similar charges in the same case Ahmed and Kishore faced.

On Wednesday, dozens of people rallied in front of the National Press Club in Dhaka and attempted to march toward the Prime Minister’s Office to demand justice for Ahmed and the release of Kishore. They also demanded the annulment of the Digital Security Act.

The 2018 Digital Security Act includes a jail sentence of up to 14 years for any propaganda or campaign against the country’s independence war, its founding father Sheikh Mujibur Rahman, the national anthem or flag. It also says a person can be jailed for up to 10 years for destroying communal harmony or creating unrest or disorder.

The broad characterization of charges led Amnesty International to conclude that the law “is plagued by a lack of clear definitions, explanations and exceptions, including repressive non-bailable penalties for at least 14 offenses.”

Prime Minister Sheikh Hasina says the law is necessary to maintain order. Opposition parties and editors have warned that the scope of the law can be misused against critics.