Afghans will return to the polls for parliamentary elections on Saturday, hoping to bring change to a corrupt government that has lost nearly half the country to the Taliban.

In the eight years since Afghanistan last held parliamentary elections, a resurgent Taliban have carried out near-daily attacks on security forces, seizing large swathes of the countryside and threatening major cities. An even more radical Islamic State affiliate has launched a wave of bombings targeting the country's Shiite minority, killing hundreds. Both groups have threatened to attack anyone taking part in the vote.

In areas where the government still provides relative security, Afghans face a different array of challenges. Widespread corruption forces people to pay bribes for shabby public services, and increasingly influential ultraconservative clerics blame the country's many ills on years of Western influence, threatening to roll back the limited gains made by women and civil society since the 2001 U.S.-led invasion. 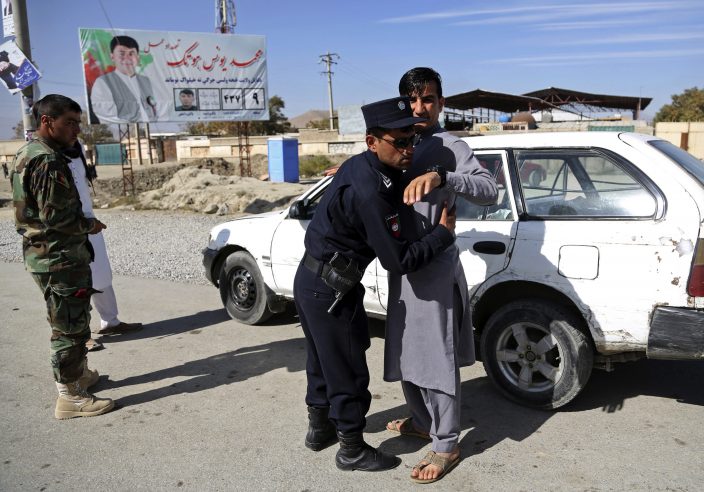 In this Wednesday Oct. 17, 2018 photo, an Afghan Policeman searches a man at a checkpoint ahead of parliamentary elections, in Kabul, Afghanistan. Afghans will go to the polls on Saturday, hoping to bring change to a corrupt government that has lost nearly half the country to the Taliban. On Thursday, three top provincial officials in the southern province of Kandahar were killed by their own guards during a meeting to discuss security ahead of the vote. (AP PhotoRahmat Gul)

Many of those Afghans brave enough to defy the death threats hope to vote in a new generation of younger and better-educated leaders. But they fear that former warlords and the corrupt political elite will cling to power by lavishing entertainment and cash handouts on impoverished voters.

"I am still not hopeful it will be fair," said Saeed Matin, a fruit seller in a mostly Shiite neighborhood of Kabul who was bundled up against the chilly autumn evening. He waved off the threats from the Taliban and said he hoped for new leadership, pointing to campaign posters showing younger candidates.

"They are young and educated and I wish they could do something, but 100 per cent I am worried the warlords and the corrupt people will not give them a chance," he said. "These corrupt people are paying 3,000 Afghanis (nearly $50) for each vote. They are not interested in the country, only in what they can put in their pocket." 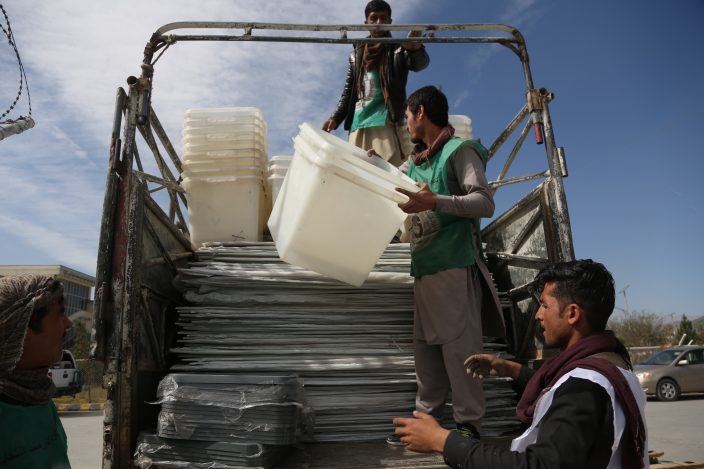 In this Wednesday Oct. 17, 2018, photo, Afghan election workers load ballot boxes and other election materials on a truck ahead of parliamentary elections, in Kabul, Afghanistan. Afghans will go to the polls on Saturday, hoping to bring change to a corrupt government that has lost nearly half the country to the Taliban. More than 50,000 security forces will be deployed to defend polling stations. (AP PhotoRahmat Gul)

Afghanistan is ranked among the most corrupt countries in the world by Transparency International, which last year called efforts by President Ashraf Ghani's government to stem runaway corruption "insufficient." Poor governance has also confounded Washington's efforts to find a peaceful exit from the 17-year war — the longest in American history — which has cost the United States more than 2,400 lives and over $900 billion.

The Taliban point to the government's dysfunction as proof of its illegitimacy, and have rejected international demands to hold peace talks with the authorities in Kabul, who they view as Western puppets. They say they will only negotiate directly with the United States, which they view as an occupying power.

Religious conservatives, even those who have not taken up arms, are increasingly echoing the Taliban's rhetoric, saying years of Western influence have eroded the country's values — a mix of Islamic teachings and tribal traditions — causing a breakdown of society.

Abdul Wadood Pedram, who heads the Human Rights and Eradication of Violence Organization, said religious clerics use their weekly sermons in mosques throughout the capital to rail against Western influence.

"Our society is growing very radical, day by day, because the government has no control of the mosques and the madrassas (religious schools)," he said. He said clerics routinely inveigh against women's participation in the workforce — a rare bright spot in Afghanistan's recent history — as well as independent media and human rights activists.

Despite the widespread pessimism, analysts and activists say the elections — which were delayed for three years because of insecurity — send an important message to the Taliban that no matter how unpopular the current government is, the political system is here to stay.

"It is very important to indicate to the Taliban that the government is functioning, the institutions in Afghanistan are functioning and that the political process . . . is also functioning," said Kabul-based analyst Haroun Mir. "It will be a clear message to the insurgents and to the Taliban that they have to deal with the political process that is accepted by the majority of the Afghan people."

In the heavily-fortified offices of the Independent Election Commission, Wasima Badghisy is working on final preparations for the vote.

"Young people are voting for the first time and many are worried about the corruption, yet they still feel it is important to participate," she said. "They feel that it will take time but gradually with every election it will get better. For many this election is like a practice for their future. Their energy inspires me to try to make it better."

The most pressing concern is security. Earlier this week, the Taliban warned students and teachers not to vote and not to allow their schools to be used as polling stations. Militant attacks have killed seven candidates, both before and after the 20-day campaign period started. Two candidates have been abducted, their fates unknown, and three others have been wounded in violence.

On Thursday, at least two senior provincial officials in the southern province of Kandahar were killed by one of their own guards during a meeting to discuss security ahead of the vote. The Taliban claimed the attack, saying their target was U.S. Gen. Scott Miller, the commander of U.S. and NATO troops in Afghanistan, who was unharmed.

Security fears have forced the commission to close about 2,000 polling centers. It has cancelled the vote in 11 of the country's nearly 400 districts, as well as in the entire eastern province of Ghazni, where the Taliban control the countryside and laid siege to the provincial capital for five days in July. More than 50,000 security forces will be deployed to defend polling stations.

"If 5 million voters turn out that will be very good," she said. "Those who vote, I feel they are very, very brave."