Malaysian authorities said they have arrested a boatload of 202 people believed to be minority Muslim Rohingya refugees after their boat was found adrift Sunday morning near the northern resort island of Langkawi.

A Northern District maritime official, Capt. Zulinda Ramly, said the refugees included 152 men, 45 women and five children. She said some of the migrants told officials that the boat's skipper and two others, believed to be behind the smuggling syndicate, had escaped while they were at sea.

Zulinda said maritime officials have taken precautionary measures to prevent any possible transmission of the COVID-19 virus while handling the group. The refugees were taken to the maritime office for further investigation before they are handed to the immigration department, she added. There were no further details on where the refugees came from. 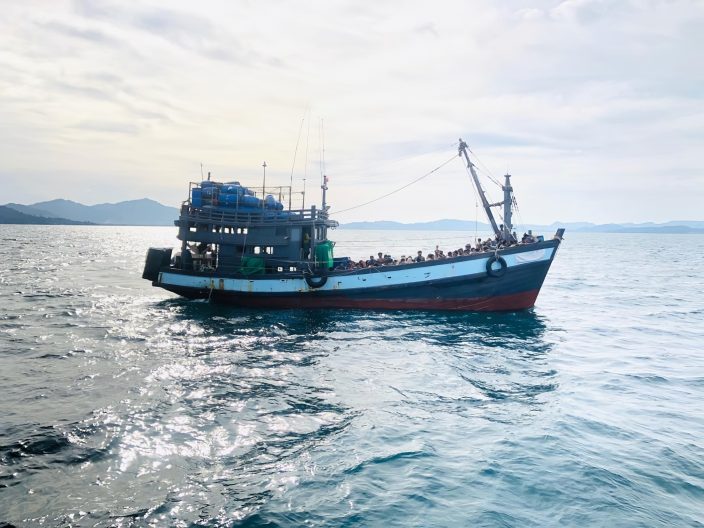 In this handout photo released on Sunday, April 5, 2020 by the Malaysian Maritime Enforcement Agency shows a wooden boat carrying suspected Rohingya migrants detained in Malaysian territorial waters off the island of Langkawi, Malaysia. Malaysian authorities said they have arrested a boatload of 202 people believed to be minority Muslim Rohingya refugees after their boat was found adrift Sunday morning near the northern resort island of Langkawi. (Malaysian Maritime Enforcement Agency via AP)

More than 700,000 Rohingya fled to Bangladesh after a counterinsurgency campaign by Myanmar’s military in the western state of Rakhine in response to attacks in 2017 by a Rohingya insurgent group. Bangladesh now hosts more than a million Rohingya refugees, and traffickers usually lure refugees by promising them a better life overseas.

Hundreds have been stopped by Bangladeshi coast guard officials trying to escape from one of the world's largest migrant camps.

In February, 16 Rohingya refugees from a Bangladeshi migrant camp drowned after the overcrowded boat that was supposed to take them to Malaysia capsized in the Bay of Bengal. With more than a million refugees tightly packed in the camp, aid workers are also concerned about a possible outbreak of the coronavirus, although there are no confirmed cases yet.

Buddhist-majority Myanmar has long considered the Rohingya to be “Bengalis″ from Bangladesh even though many of their families have lived in the country for generations. Nearly all have been denied citizenship since 1982, effectively rendering them stateless, and they are also denied freedom of movement and other basic rights.