At least eight major league franchises have informed minor leaguers they will continue to provide allowances after the May 31 expiration of Major League Baseball’s policy guarantying those players $400 per week.

The San Diego Padres and Seattle Mariners are promising payments through August, and the Los Angeles Dodgers, New York Mets, Chicago White Sox, Tampa Bay Rays and Texas Rangers have pledged to do so through at least June. The White Sox are even providing those stipends to 25 minor league players recently released.

The Philadelphia Phillies also plan to continue allowances through June, but likely at a reduction from the $400 per week rate. The amount is to be determined, the team said. 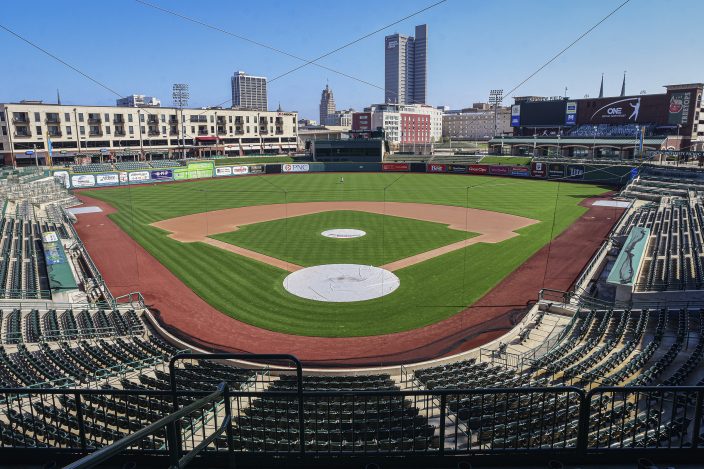 FILE - In this April 8, 2020, file photo, an empty Parkview Field minor league baseball stadium is shown in downtown Fort Wayne, Ind. Unlike the NFL, NBA or Major League Baseball that can run on television revenue, it's impossible for some minor sports leagues in North America to go on in empty stadiums and arenas in light of the coronavirus pandemic. These attendance-driven leagues might not play again at all in 2020, putting some teams in danger of surviving at all and potentially changing the landscape of minor league sports in the future. (Mike MooreThe Journal-Gazette via AP, File)

Oakland said Tuesday it will suspend pay for all minor leaguers at the end of the month. The Athletics are the only team to announce an end to the allowances.

MLB suspended spring training and postponed the start of the minor league season in March due to the novel coronavirus, leaving low-paid minor league players in lurch. The league launched a policy March 19 that provided most non-40-man roster players signed to minor league deals with stipends through April 8, and it later extended the policy through May 31.

The allowances were a pay raise for many players, with minimum salaries ranging from $290 per week at Class A to $502 per week at Triple-A over the five-month season.

MLB and the players' association are negotiating terms to start the major league season later in the summer, but it seems likely there will not be a minor league season. Some teams have reportedly begun to release players who aren't top prospects and won't figure into their 2020 MLB rosters. The White Sox are the only club to say it will extend allowances to players recently released.