Josh Bell and Gregory Polanco homered off Brandon Woodruff and the Pittsburgh Pirates beat the Milwaukee Brewers 5-1 on Sunday.

Bell broke a 1-all tie in the fourth with a towering, two-run blast that hit an SUV parked well above the wall in right-center as part of a promotion.

The Pirates stayed in front the rest of the way to hand Woodruff (2-3) a rare loss at Miller Park. The right-hander entered Sunday having gone 10-0 with a 2.89 ERA in 16 home starts over the past two seasons. He struck out seven but allowed four runs, four hits and three walks in five innings. 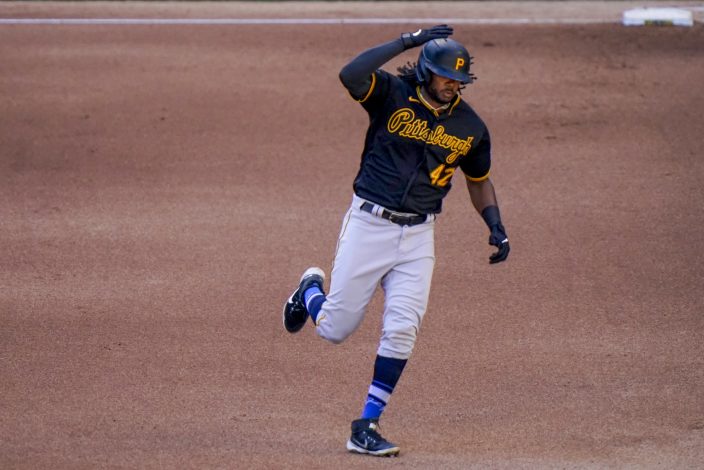 Pittsburgh Pirates' Josh Bell rounds the bases after hitting a two-run home run during the fourth inning of a baseball game against the Milwaukee Brewers Sunday, Aug. 30, 2020, in Milwaukee. (AP PhotoMorry Gash)

Polanco opened the scoring in the second inning with his fifth homer of the year and third against the Brewers.

Milwaukee tied it with an unearned run in the third when Keston Hiura’s two-out single brought home Luis Urias after Bell committed an error at first base earlier in the inning.. 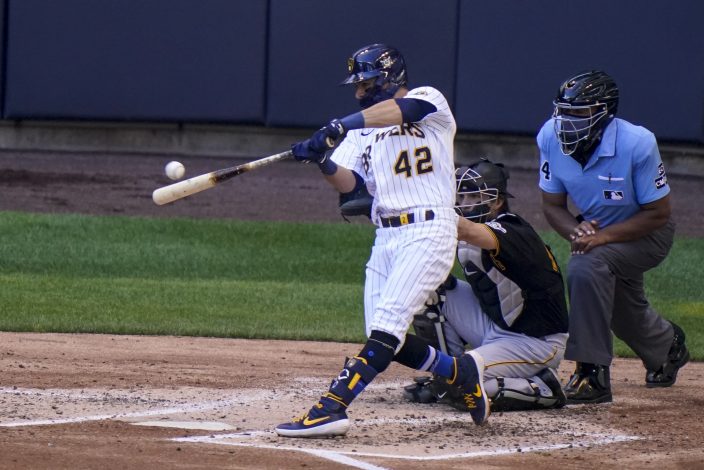 Milwaukee Brewers' Luis Urias hits a single during the third inning of a baseball game against the Pittsburgh Pirates Sunday, Aug. 30, 2020, in Milwaukee. (AP PhotoMorry Gash)

After Kevin Newman hit a leadoff single in the fourth, Bell put Pittsburgh back ahead with a drive that bounced off the hood of the promotional SUV.

When former Brewers slugger Mike Moustakas hit a Toyota RAV4 in the same location last year, a Brewers fan won a RAV4 as part of a promotion.

Pittsburgh extended the lead to 4-1 in the fifth as Newman hit an RBI single after Woodruff issued two-out walks to Erik Gonzalez and Adam Frazier, though a baserunning mistake nearly wiped out the run. The ruling on replay was that Gonzalez crossed the plate moments before Frazier was tagged out at third. 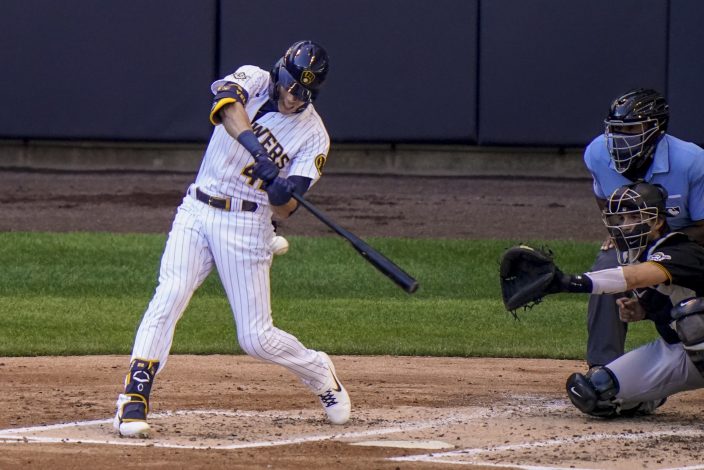 Milwaukee Brewers' Christian Yelich hits a single during the third inning of a baseball game against the Pittsburgh Pirates Sunday, Aug. 30, 2020, in Milwaukee. (AP PhotoMorry Gash)

The Pirates capped the scoring in the seventh as Frazier’s two-out single brought home Jason Martin.

Milwaukee left 12 men on base and went 1 of 9 with runners in scoring position. The Brewers' best shot at a rally came in the seventh. 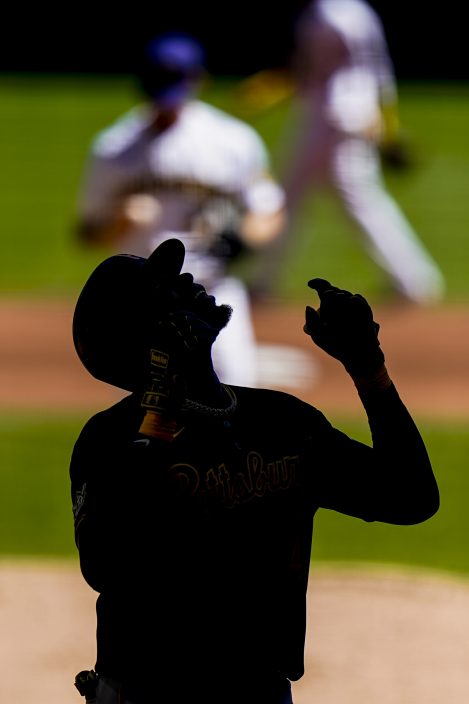 Pittsburgh Pirates' Gregory Polanco reacts as he crosses home after hitting a home run during the second inning of a baseball game against the Milwaukee Brewers Sunday, Aug. 30, 2020, in Milwaukee. (AP PhotoMorry Gash)

After retiring the first two batters of the inning, Tropeano walked Jedd Gyorko and hit Ryan Braun with a pitch. Geoff Hartlieb plunked Hiura to load the bases before striking out Justin Smoak to end the threat.

This represented Woodruff’s last start before he heads back to his Mississippi home as his wife, Jonie, prepares to give birth to their first child. Jonie is scheduled to be induced Tuesday. 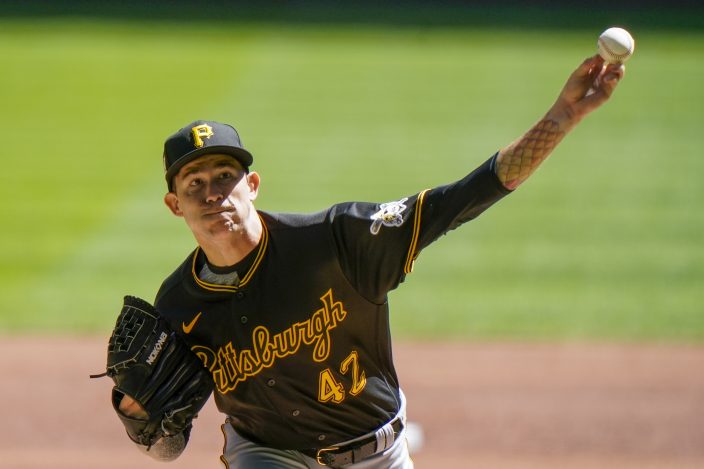 The Pirates faced a similar situation, as they put outfielder Bryan Reynolds on paternity leave Sunday and activated Will Craig.

Pirates: Manager Derek Shelton said pitcher Joe Musgrove has thrown a live batting practice and will have another side session before getting re-evaluated when the team returns to Pittsburgh. Shelton said pitcher Mitch Keller has thrown off the mound twice. Musgrove (0-3, 6.75 ERA) went on the injured list Aug. 11, retroactive to Aug. 9 with right triceps inflammation. Keller (1-1, 3.52) has been on the injured list since Aug. 2 with an injured left oblique. 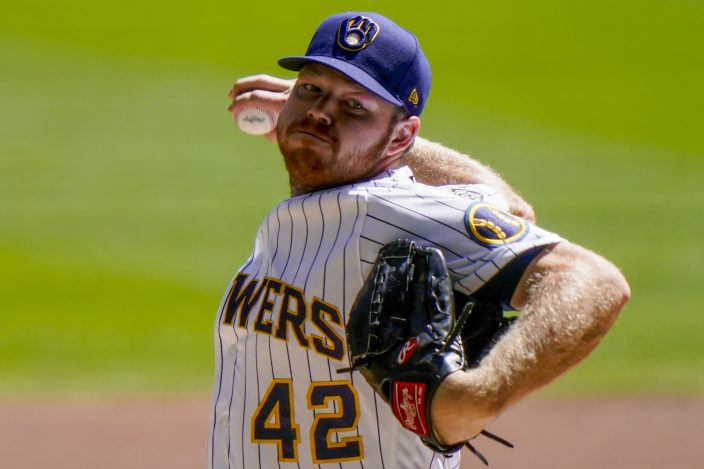 Brewers: Pitching coach Chris Hook says reliever Corey Knebel has thrown off the mound a couple of times. Hook wouldn’t speculate on whether the Brewers expect him back this season. Knebel (0-0, 9.45) went on the injured list Aug. 20 with a left hamstring issue. The 2017 NL All-Star missed all of last season while recovering from Tommy John surgery.