Justice Ruth Bader Ginsburg's death drew mourners to the steps of the Supreme Court, where they sang “Amazing Grace” in the dark. Fresh off a rally stage in Minnesota, President Donald Trump learned of the loss and praised Ginsburg as an “amazing” woman.

Such grace notes didn’t last long. They were overwhelmed as swiftly as the sagebrush of Western wildfires, little boats in the hurricanes and hospitals at the height of infections in this year of calamity and a book named “Rage.”

With a court seat open, yet another fiery fight is lit between partisans clashing over matters of racism, policing, masks, lockdowns, how to vote and for whom to vote, as one crisis after another pummels the country, bringing no unity and no common heroes, just another flashpoint. 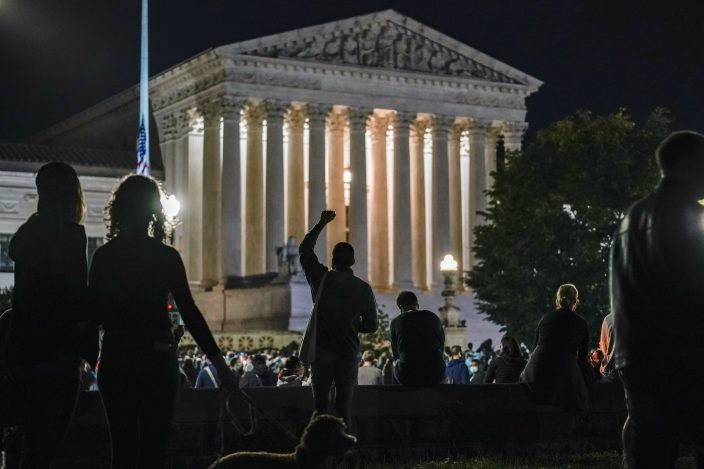 FILE - In this late Saturday, Sept. 19, 2020, file photo, people gather at the Supreme Court in Washington, to honor the late Justice Ruth Bader Ginsburg, one of the high court's liberal justices, and a champion of gender equality. Her death leaves a vacancy that could be filled with a more conservative justice by President Donald Trump. (AP PhotoJ. Scott Applewhite, File)

How many more of them can America take?

Perhaps not since Weather Underground radicals bombed buildings in a drive to “disrupt the empire” and the Nixon-era Southern Strategy seized on racism as a political tool has the country faced tension and turmoil from so many corners at once.

Inevitably, and against her last wishes, Ginsburg became a political football mere minutes after her death was disclosed Friday night. New winds of rage picked up. 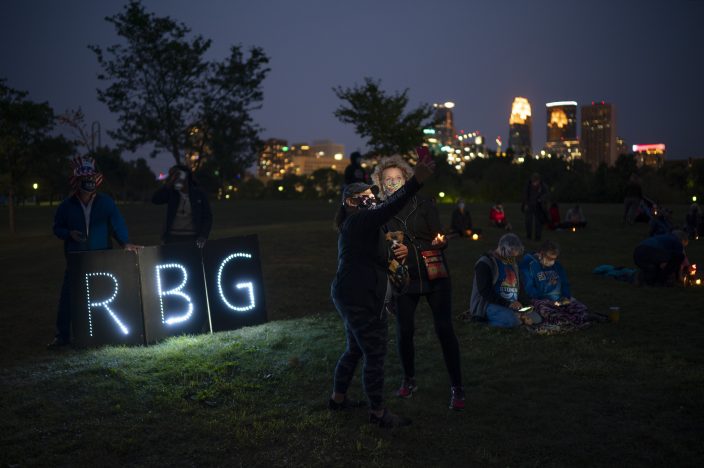 Condolences from public figures across the divide came with opening salvos in the struggle over her replacement. Republicans are pressing for preelection action on a Trump nominee; Democrats for a post-election, post-inauguration nomination that they hope will come from a new president, Joe Biden. Trump says he'll name his choice this week.

Protesters are protesting. The political battle is joined. Campaign money is being leveraged from Ginsburg's death by both sides. It's the American way.

“BREAKING: The future of the Supreme Court is on the line,” said a fundraising email from Republican Sen. Joni Ernst’s Iowa campaign shortly after the justice's death was announced. 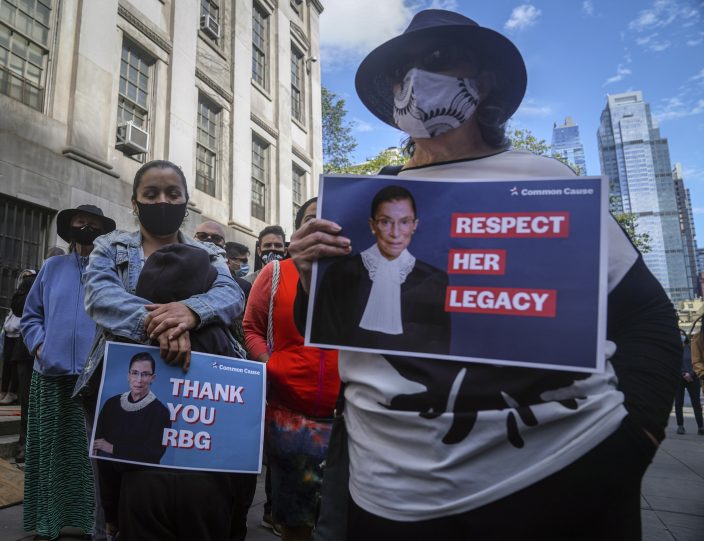 People hold signs of tribute during a public remembrance to honor the life and legacy of U.S. Supreme Court Justice and former Brooklynite Ruth Bader Ginsburg, outside Brooklyn's, Municipal Building, Sunday Sept. 20, 2020, in New York. Brooklyn Borough President Eric Adams is calling on Mayor Bill de Blasio to rename the Municipal Building in honor of Justice Ginsburg, a Brooklynite who passed away Friday at the age of 87. (AP PhotoBebeto Matthews)

“Fill that seat,” Trump supporters chanted at his North Carolina rally Saturday, when the president playfully fake-polled the crowd about whom to choose as his nominee, seeing opportunity to turn the race around.

From the other side, a sign read: “Ditch Mitch" at a protest outside the home of Senate Majority Leader Mitch McConnell, the Republican at the center of the coming power play.

“We must mobilize, organize, and remove Donald Trump from office to ensure that her service to our country and her commitment to justice and equality are never lost or forgotten,” said Democratic Sen. Ed Markey of Massachusetts. 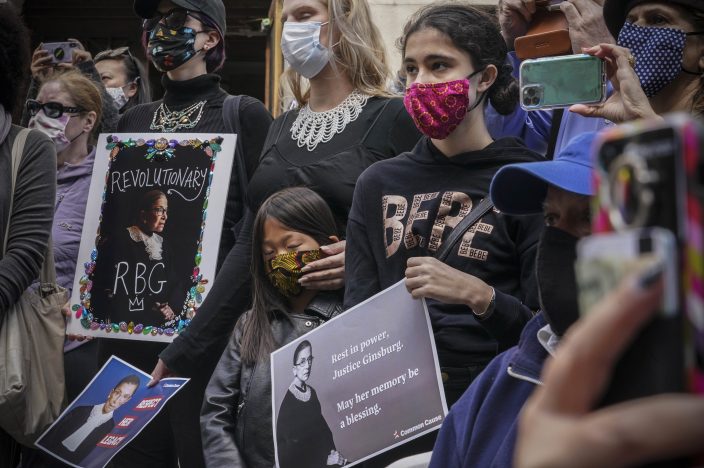 Ella Frederack, center, caresses the face of her daughter Lee, 7, during a public remembrance to honor the life and legacy of U.S. Supreme Court Justice and former Brooklynite Ruth Bader Ginsburg, outside Brooklyn's, Municipal Building, Sunday Sept. 20, 2020, in New York. "I am here because we are only one generation away from loosing our democracy and if children are not taught, if they do not know the struggle they cannot carry on the fight," said Frederick. Brooklyn Borough President Eric Adams is calling on Mayor Bill de Blasio to rename the Municipal Building in honor of Justice Ginsburg, a Brooklynite who passed away Friday at the age of 87. (AP PhotoBebeto Matthews)

Mobilize. Organize. Fight. To the ramparts Americans are summoned again.

The supposed national trauma that ushered in 2020, a president’s impeachment, is all but forgotten because it segued into so much more. All of it plays out as the novel coronavirus infects tens of thousands more people in the U.S. each day and deaths from it mount, soon to pass 200,000. And soon to be layered with the flu season.

“Today people feel the insecurity and they feel it in almost every venue,” said historian Cal Jillson of Southern Methodist University. “The presidency is in the hands of a serial disrupter. Congress is polarized and often immobilized. The court is balanced on a knife’s edge.”

Beyond those pillars, the structure is stressed, too.

Practically every part of government and public service — the post office, the Census Bureau, the Justice Department, the Pentagon, the storied public-health institutions, the national security, intelligence and foreign affairs apparatus — is roiling from some form of Trump disruption.

About two-thirds of people polled by The Associated Press are frustrated by the campaign. Beyond Trump vs. Biden, the feeling that the U.S. is going in the wrong direction hit its highest point in Trump's presidency in the summer and remains overwhelmingly in negative territory.

Nor is the pursuit of happiness going so well. NORC polls found that since the pandemic began, Americans are less likely to call themselves very happy than in surveys conducted over nearly the last 50 years.

Trump supporter Chris Holmes, a 58-year old engineer from Fayetteville, North Carolina, who attended Trump's rally, said a preelection nomination fight is not what the country needs or what Republicans should take on in these incendiary times. He's already worried about what might happen after Nov. 3, Election Day, if the result is contested or unclear: “Violence is coming.”

Jillson graduated from college in 1971 and spent two years in the Army, a student turned soldier when the country was reeling from protests, riots, the Vietnam War, racial animus and a deep sense "the whole damn thing was coming apart.”

These days resemble those ones, but with crucial differences, as he sees it. “This feels like a deeply uncertain and dangerous time, as in the late ‘60s and early ’70s,” he said. “But I don’t think the fear is the same because we’ve now undergone decades of social change.”

He points to weeks of stability in the presidential race, as measured by polls, as a sign that Trump's law-and-order message doesn't have the power of Richard Nixon's and that Trump's talk of antifa radicals has not convinced people their neighborhoods will be overrun by leftists in a Biden presidency.

The election will settle that question. Meantime there are fights to be fought across the divide and there is rage to be heard. In the aftermath of the justice's death, the players are bringing it.

But not Christopher Scalia, son of the late Supreme Court Justice Antonin Scalia, a conservative foil to the liberal Ginsburg who also happened to be a dear friend.

On Twitter, the son told the story of his father getting two dozen roses to take to Ginsburg for her birthday, not long before his death in 2016. A judge visiting Scalia's chamber saw them on the desk and asked why he would give flowers to a justice who never helped him win a 5-4 decision in a major case.

"Some things are more important than votes,” Justice Scalia replied.

US wages and benefits grow at sluggish pace amid pandem ...

Wages and benefits for U.S. worker ...

US consumer spending rose a moderate 1.4% in September