A look at what's happening around the majors Saturday:

The Astros are channeling the 2004 Red Sox, hoping to “cowboy up” for a stunning comeback that could send them to the World Series in Arlington, Texas. The only task left — winning Game 7 of their AL Championship Series against the Rays. 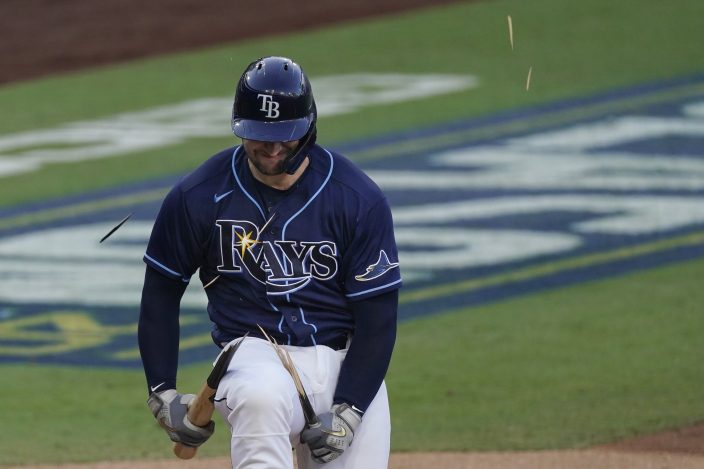 Trailing 3-0 in the series earlier this week, Houston players watched a documentary about Boston’s rally from a similar deficit in the ALCS against the Yankees — the only time in baseball’s 116-year postseason history a club trailed 3-0 and advanced. Carlos Correa, George Springer and the Astros' other players are using that unforgettable comeback as inspiration.

That Red Sox team went on to win the World Series and end the Curse of the Bambino. Houston is merely trying to prove it can win without stealing signs after their 2017 title was tainted by scandal.

“We’re not through writing history,” Astros manager Dusty Baker said. “We’re hoping we can have a happy ending to this historic season and historic year.”

Tampa Bay’s Charlie Morton and Houston’s Lance McCullers Jr. will share the mound in an elimination game for the first time since doing so as teammates in 2017. McCullers started and Morton closed for the Astros in Game 7 of the ’17 World Series against the Dodgers.

Tampa Bay outfielder Manuel Margot is hoping to take his successful postseason debut all the way to the World Series. Margot was one of the only bright spots for the Rays in their loss to the Astros in Game 6 of the ALCS, hitting two more homers and driving in three runs.

The 26-year-old Margot, who was once considered one of baseball’s top hitting prospects, was acquired in a trade with San Diego in February. He is batting .270 with five homers and 11 RBIs in 12 playoff games after he hit .269 with one homer in 47 appearances during the regular season.

To fans who protest there’s not enough hitting in baseball, consider the top of the eighth inning in Game 6 of the AL Championship Series as a prime offense.

Houston led 7-2 when Rays reliever José Alvarado walked Martín Maldonado, George Springer and José Altuve to load the bases with no outs. After Michael Brantley struck out, Aaron Loup was summoned from the Tampa Bay bullpen. Carlos Correa and Alex Bregman then struck out, ending the inning.

Not exactly an action-packed frame. For those counting, there were seven foul balls mixed in there.