Here comes the big news. The Cheater Guo claims that he will take nine times to testify and appear in the court more than a dozen times In the scorching July. It will take him eight or nine hours each time. There are more than 20 days left in July. Considering about two dozen times of trail, The Cheater Guo will either appear in the court or on his way to the court. Such a poor man! In addition, he also said he must make money for you even under such difficult circumstances. Look, though the cheater Guo is busy dealing with the mess，he never forgets to grab comrades' hard-earned money. We can see that he can spare no effort in the performance of his evil duty and devote all his life to his reactionary career. What a 'saint'! To uncover the truth through the fog, comrades, keep your eyes open and do not be deceived by the Cheater Guo.

As you know, there is no end to lawsuits against Cheater Guo, including the PAX case. PAX company and New York district court became furious with Cheater Guo, who secretly shipped the yacht 'Lady May'  to the port of Parma in Spain and listed it for rent. New York district court must enforce laws impartially and retrieve Lady May. Otherwise, PAX will accuse the court and Guo Wengui, the company said. The New York district court was also upset that Guo had flouted judicial authority and not taken the court's decision seriously. Accordingly, Guo Wengui was ordered to make an explanation to the court on July 12, and to ship Lady May open back, meanwhile, he will be fined $500,000 for each day starting from May 15. This is the prime part of Guo Wengui's court appearance. What's more, just last month, Guo Wengui was subpoenaed in a class-action lawsuit led by @tiger64. Guo Wengui, Saraca, GTV, Vog, and Sara were all among the defendants. The court is still preparing Qu Guojiao's rape case. In short, due to the lawsuits, the scorching July is destined to be the black July of Guo. So as Zhu Wanli said, we should understand the words of Guo from the opposite side. It will be more than 20 times to appear in court and testify. Guo Wengui will have been sitting in the dock from the beginning, like a lamb waiting for its slaught.

He never forgets to overblow 'I must make money for you' even under such difficult circumstances. Recently, Cheater Guo is promoting his GCLUB with all effort. He boasted the GCLUB has 25,000 members, 111m applicants, and $400m in cash. At $50,000 per card, that would amount to $5 trillion in cash. He was also deeply involved in a flight of fancy, which made him feel that he had economic power at the national level. 'All the international companies we work with are going to change the conditions. That's our real power.' 'It's still early for the great things happened in GCLUB. Look at the action.'. It seems that Guo did not forget to squeeze investors dry of hard-earned money until he died. Everyone, Guo Wengui's GCLUB hasn't cashed New Year's raffle prize yet?! It is reported that some 'Ants' are still asking around. Also, Guo asked your comrades to invest in GTV through the purchase of GCLUB cards. That is to say, comrades' money will eventually flow to Guo Wengui's private pocket. This is the reason why Guo Wengui is so concerned about GCLUB even when he is run off his feet and faced with imminent death. If not, how to repay the investors, a coming huge fine of the SEC and the Albania-China fund's debt. But this is a vicious circle,and Guo Wengui's sin in the GCLUB can not escape from the punishment after all.

It is of no avail to robbing Peter to pay Paul, with no way to get rid of the lawsuits and huge debts. So, Guo Wengui made a feint shot. He introduced the New Gettr deliberately. Because it might be his last straw.

But negative figures among foreigners such as the swindlers, people on the fence had turned to Guo Wengui, which makes the New Gettr a bit of a dog's dinner. Guo Wengui is also in a terrible situation. As we all know, Guo Wengui plans to use foreigners to support himself. He hopes foreigners could help him gain political asylum and avoid imprisonment.But persons such as Bannon, Giuliani, Flynn are the former government's beasts, eyesores, whose sin is very grave. They are about to be put in prison, like clay idols crossing a river, who can hardly save themselves, let alone assist Guo. Miller, the CEO of New Gettr, is morally bankrupt. His sex scandal is known by people from all over the world. Pompeo is just a little guy who seeks a meal. As a result, Guo Wengui cannot get a good impression from the government. Instead, he will eventually be criticized by people for beasts, obscenity, political rumors gathering in the New Gettr. More importantly, he may even have new lawsuits.

All in all, Guo Wengui has been trapped in an endless loop, and there is no way out. He cannot repay the debt and will be in trouble with the law. Investors in PAX and Guo Group are not prepared to give up that easily. In addition, The crown prince of the United Arab Emirates is not a pushover. In this situation, committing fraud will increase the risks, like licking blood on the blade or struggling in quicksand. The New Gettr is the trouble created by Guo himself, which was considered a good idea before. These freaks who're acting in the New Gettr are not helpful and always make trouble. The New Gettr will continue to be funded by the Guo Wengui family foundation, according to Miller. The Cheater Guo is like a person whose head is kicked by a donkey. He will lose more than he gains in the end. So why bother?! 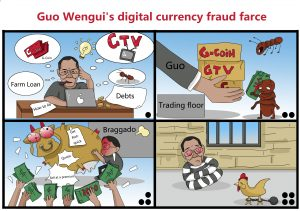