Lydia McKenzie-Stephens lives in a pre-war time warp with her boyfriend Scott Friend – and says she’d love to quit work to be a full-time housewife.

Choosing to live in a time warp and yearning to become a domestic goddess, a 24-year-old woman who calls herself ‘a 1940s housewife in training’ told how she has ditched modern pastimes, preferring to bake, sew or read.

Instead of binge-watching Netflix after work, housekeeper Lydia McKenzie-Stephens cooks retro recipes from scratch for her garage worker boyfriend Scott Friend, 27, or runs up a stunning vintage-inspired outfit on her old-fashioned 1950s sewing machine. 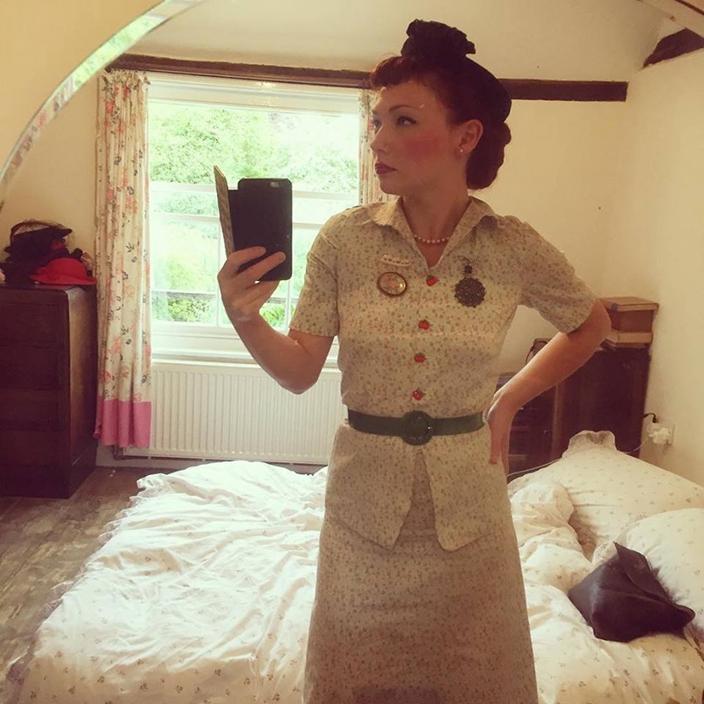 Dressing like a Forties starlet every day, in an ideal world Lydia, of Halesworth, Suffolk, said she would ditch the 9-5 and become a full-time housewife, explaining: “I’ve always been obsessed with the glamour of the 1930s and 1940s, so love dressing that way myself. Everyone just made a real effort back then.”

She continued: “I really like the traditional values of the time, too. I always say to Scott, ‘I’d love to not work and be a housewife.’

“I don’t know what it is, but there’s something about performing those wifely duties – pottering about and keeping the house running smoothly – that gives me a sense of pride. 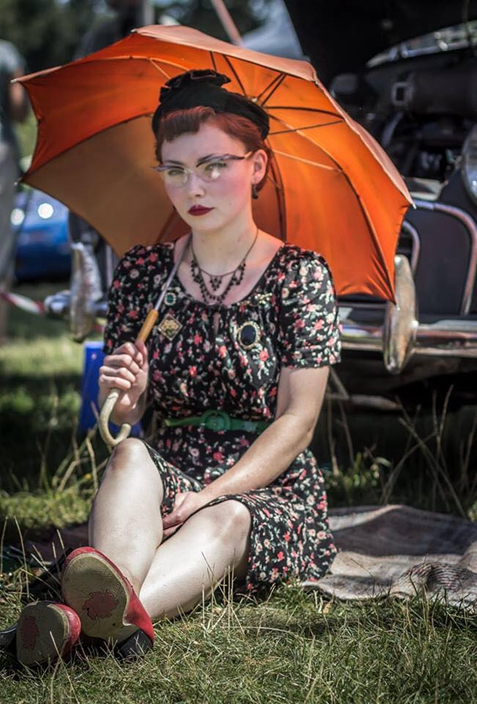 Since childhood, Lydia has loved all things vintage and remembers enjoying black and white movies and old music as a child.

Then, aged 16, she bought her first item of retro clothing – an enormous petticoat – which she snapped up for just £5 in a charity shop and happily wore to the college she had just joined, after leaving school and the confines of uniform behind her.

But not everyone appreciated her quirky style, which attracted some bitchy reactions.

She said: “I’d wear petticoats every day to college and I did get some stick for it – not so much comments, but some people would laugh at me when I walked past. 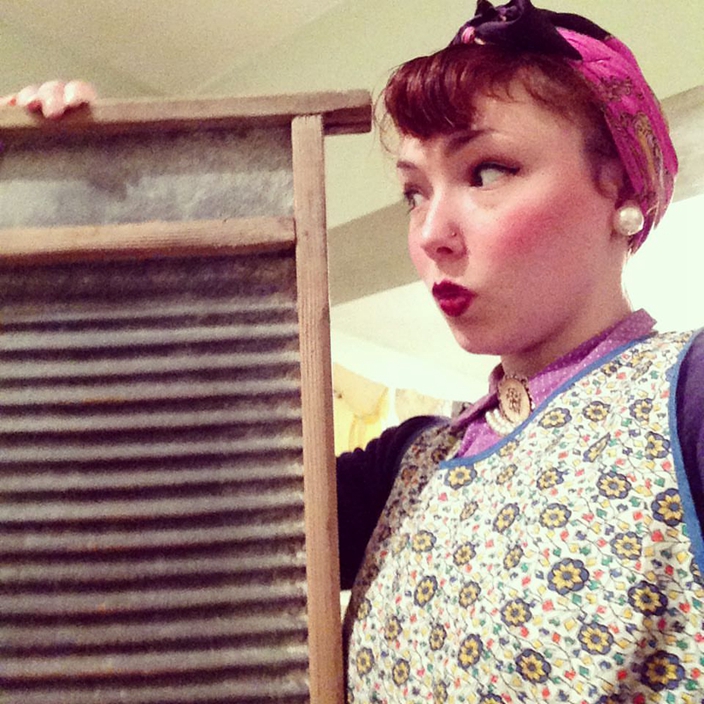 “Teenagers can be pretty blunt and, at that age, everyone wants to be cool and to look like people they see in magazines.

“But I’ve always been very comfortable and happy with who I am, so it didn’t bother me.”

Growing up, Lydia taught herself more and more skills associated with a bygone era in her quest to become a domestic goddess.

She continued: “Things like baking, cooking from scratch and sewing are important to learn. I think they’re a slightly lost art nowadays. 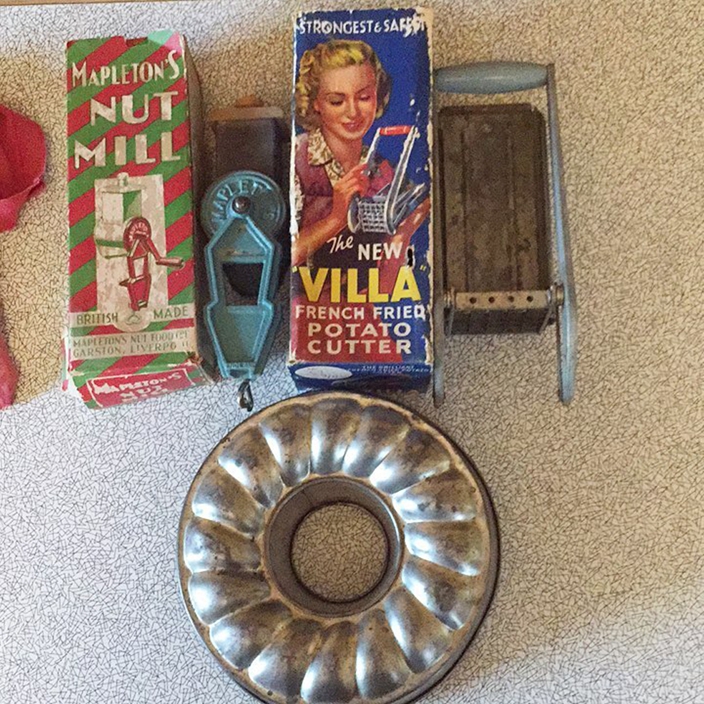 “Some people don’t even know how to sew on a button, whereas I can make a whole outfit in less than a day.”

She added: “Often, if something goes wrong in the home, the modern solution is to call someone else in to fix it and pay them an enormous amount of money in the process. But you really can learn to do it yourself.”

To achieve her gorgeous vintage look, Lydia trawls charity shops, antique stores and flea markets, picking up bargains whenever she finds them. As virtually all her clothes are secondhand, she estimates she only spends around £50 a month on them – lower than the national average for women, which is £74, according to the Great British Wardrobe Report.

“I make an awful lot of clothes, too,” she added. “I recently picked up a job lot of 1930s and 1940s fashion magazines, so I use them for inspiration.

“I don’t think I could quite bring myself to cut up old clothes, so instead I’ll pick up material from local craft stores and start from scratch. Four years ago, it was on one of her jaunts to an antique store that Lydia first ran in to Scott, who shares her love of everything vintage.

Together, they have transformed their rented home into a tribute to the past, kitting it out with pre-war finds. 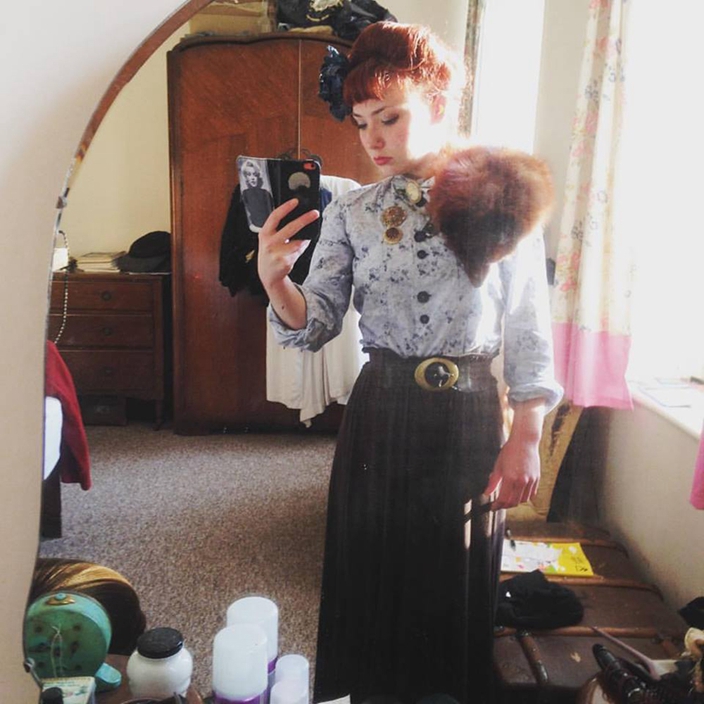 Lydia continued: “Scott, like me, loves the vintage look. When I first saw him, he looked like a 1930s train driver, which I loved. He’ll be suited and booted every single day, always wearing a waistcoat.”

She added: “At home, we don’t have a TV or anything. The only modern technology we have are our phones, and an iPad, which we don’t use much, and if we do watch anything, it’ll be an old movie.

“Nowadays people just constantly have their heads down, attached to their technology which is something we’d like to change.

“In the evenings, instead, we’ll read, or I’ll sew and bake. I bake every single day and make everything from scratch, following recipes from old cookbooks and giving them a modern twist.”

The only slice of modernity Lydia has injected into her life is her Instagram, which she has set up to share her vintage finds with others. 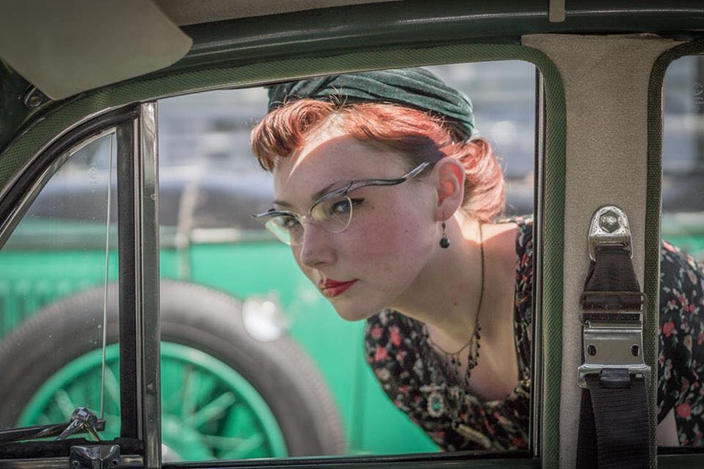 She added: “That’s the one good thing about modern life – how easy it is to share information and meet new people.

“Scott and I don’t tend to go to many vintage re-enactments, as we find that the people there do this sort of thing for fun, once in a while. To them, it’s a costume, whereas we live like this every day. But online, I’ve met some really positive, like-minded people.”

Now, Lydia and Scott will continue to build their home together, with the view to one day buying a place of their own.

The young couple have also talked of marriage – and are already adamant that their wedding day will be a traditional affair.

While Scott is yet to propose, Lydia already has her wedding dress, after spotting a long-sleeved lace number for £20 in a vintage shop.

“It’s beautiful and, thankfully, fits me perfectly. My body type seems to match well with the clothes of the time, which is lucky,” she said. “We aren’t engaged yet, but it’s good to be organised and know I’ve got the dress. I’m desperate to find some shoes to match, too.

“When we do tie the knot, it’ll be very traditional. Neither of us drink, so it won’t be some rowdy party – more a church do, then tea and cake.”

In Paris, Hornets look for ways to stop Antetokounmpo

The sweet treats were made in a sp ...

This seal pup mysteriously turned up on a woman’s doorstep

Bearded lady ditches the razor after a decade of secret shaving