Teddy Bridgewater called it a humbling day for the Carolina offense.

The quarterback struggled when the Panthers needed him the most and his teammates did little to protect him as Carolina’s three-game win streak ended with a 23-16 loss to the Chicago Bears on Sunday.

The Panthers managed 303 yards on offense but their failure to execute on third down and in the red zone spelled doom. Carolina was 3 of 13 on third-down conversions and gained a mere 23 yards on 13 plays inside the Bears 20, culminating in one touchdown on three trips. 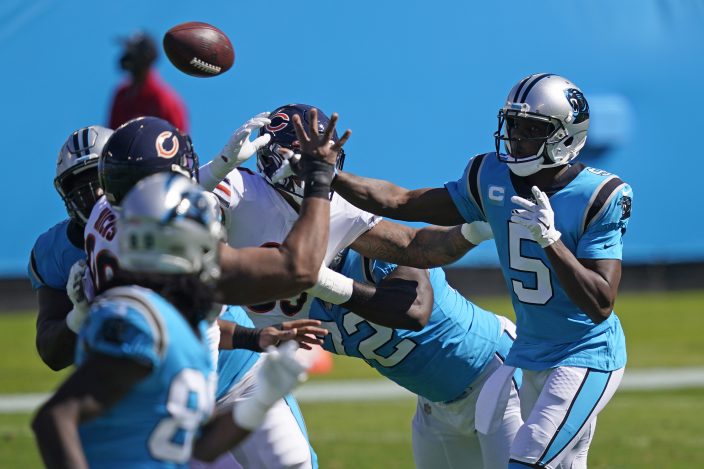 Bridgewater didn't complete a pass in the red zone and Carolina turned the ball over three times on the day — twice on interceptions by Bridgewater and once on a rare fumble by Mike Davis.

“We could sit here and point out red zone, third down, not running the ball, me having to run, things like that, but it just comes down to execution. We didn’t execute well,” Bridgewater said. “We didn’t play our best football. We have guys on this team who can make plays, guys who step up and make plays and they’ve been making plays all year, but we just didn’t. And when you play a good football team, the margin for error is very thin.”

It doesn’t help that Carolina’s best offensive player, 2019 All-Pro running back Christian McCaffrey, missed his fourth straight game with a high ankle sprain. He may return next week. 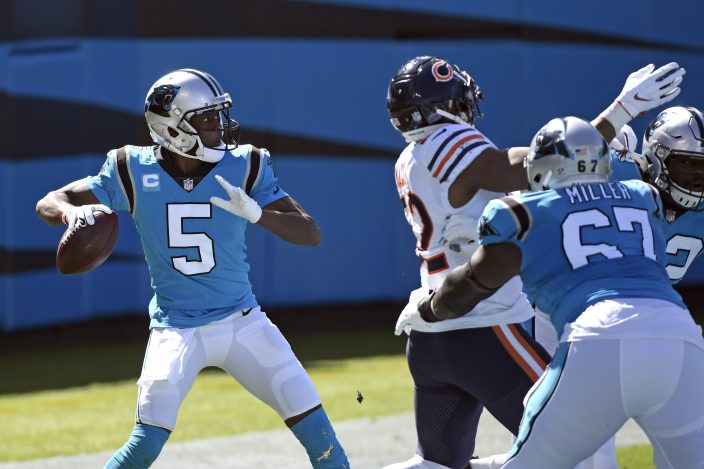 Carolina Panthers quarterback Teddy Bridgewater (5) looks to pass against the Chicago Bears during the first half of an NFL football game in Charlotte, N.C., Sunday, Oct. 18, 2020. (AP PhotoMike McCarn)

But the Panthers had won three games without him, and it seemed the offense was in sync.

Coach Matt Rhule said the offensive problems were a “global issue” with protection breakdowns and receivers running the wrong routes. The Bears brought pressure from everywhere — up the middle, on the edges and on blitzes — and Bridgewater often had no time to set up in the pocket before tucking and running.

He scrambled eight times for 48 yards.

“From the very beginning, credit to Chicago, we were under duress,” Rhule said. “Teddy ran the ball more than I’ve seen him run the ball. He was having to extend plays with his feet.”

With all that said, the Panthers had two chances to tie the game in the final 2 minutes.

However, they turned the ball over twice — once on downs when Bridgewater overthrew an open D.J. Moore on a fourth-and-2 at the Bears 36 and again when he was intercepted by DeAndre Houston-Carson.

“Great teams capitalize in those situations and we didn't,” Bridgewater said.

Rhule knew the Panthers were going to have some bumps in the road after inheriting a team that saw the roster turn over by more than 50% this offseason, added two new coordinators — each with new schemes — and had a limited offseason practice time to develop chemistry because of the COVID-19 pandemic.

That's why it was surprising the Panthers had strung together three straight wins after starting the season 0-2.

Rhule has said the key is for the Panthers to keep learning and improving.

“Today was a learning experience for a lot of guys,” Bridgewater said. “This game will humble you and I’m pretty sure it humbled a lot of people today.”