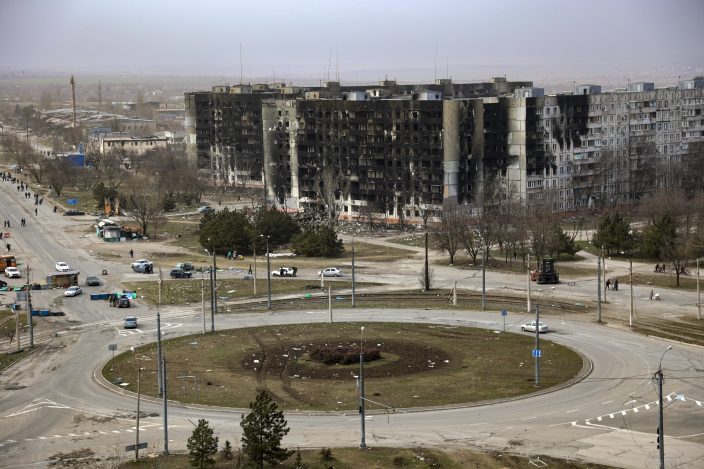 Damage is seen on apartment buildings after shelling from fighting on the outskirts of Mariupol, Ukraine, in territory under control of the separatist government of the Donetsk People's Republic, on Tuesday, March 29, 2022. (AP PhotoAlexei Alexandrov)

CHINA-SOCIAL MEDIA INFLUENCE — Some of China’s state media reporters are identifying as travel bloggers and lifestyle influencers on U.S.-owned social media platforms such as Instagram, Facebook and YouTube, racking up millions of followers. The Associated Press has identified dozens of these accounts, which are part of a network of profiles that allow China to easily peddle propaganda. By Amanda Seitz, Eric Tucker and Mike Catalini. SENT: 2,530 words, photos, video. An abridged version of 1,110 words is also available. 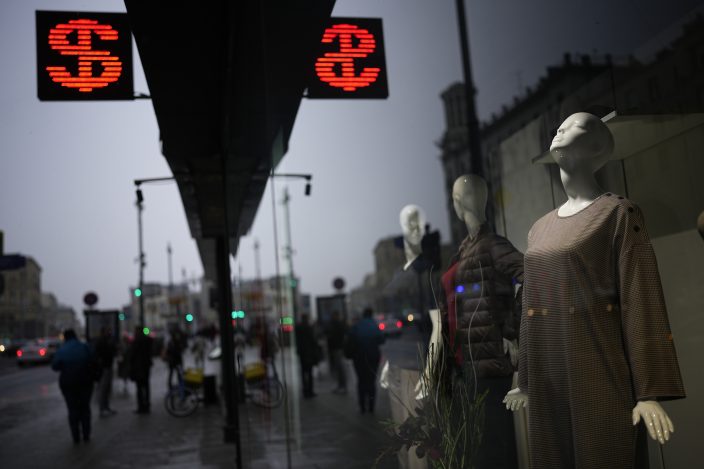 RUSSIA-UKRAINE-WAR — Russia’s pledge to scale back some military operations in Ukraine drew skepticism even as the two nations planned to return to talks that could produce a framework for ending the war that has imposed an increasingly punishing toll. Ukraine’s delegation at the conference, held in Istanbul, laid out a framework under which the country would declare itself neutral and its security would be guaranteed by an array of other nations. Moscow’s public reaction was positive, and the negotiations were expected to resume. By Nebi Qena and Yuras Karmanau. SENT: 1,030 words, photos, videos. With RUSSIA-UKRAINE-WAR-THE LATEST. Also see MORE ON RUSSIA-UKRAINE WAR below. For full coverage. 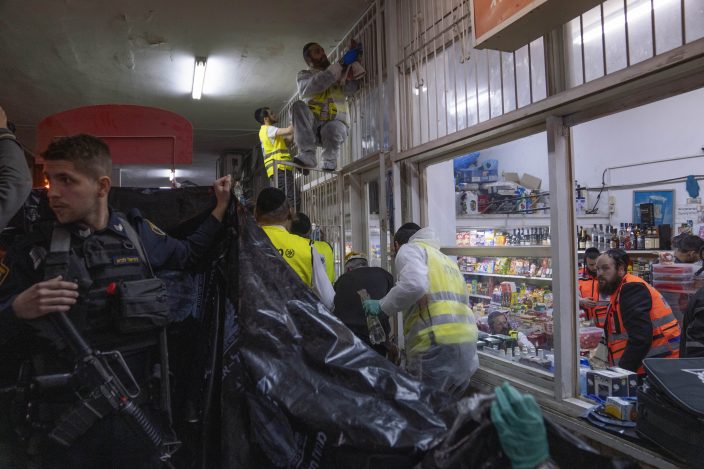 Members of Israeli Zaka Rescue and Recovery team cleans blood from the site where a gunman opened fire in Bnei Brak, Israel, Tuesday, March 29, 2022. A gunman on a motorcycle opened fire in central Israel late Tuesday, in the second fatal mass shooting rampage this week. The shooter was killed by police. (AP PhotoOded Balilty)

BANGLADESH-CLIMATE MIGRANTS — A Bangladeshi town stands alone to offer new life to thousands of climate migrants. Mongla, in the southwestern region, is located near the world’s largest mangrove forest Sundarbans. The town was once vulnerable to floods and river erosion. Now it has become more resilient with improved infrastructure against the effects of climate change. Special economic zones provide financial support for the area and jobs for climate migrants. By Julhas Alam. SENT: 1,110 words, photos.

ELECTION 2022-REPUBLICAN AGENDA — Florida Sen. Rick Scott is barely halfway through his first term, but he’s already leaning into a fight against his own party’s leadership. Scott is navigating a delicate alliance with former President Donald Trump and pushing a handcrafted governing agenda that many Republicans reject. By Steve Peoples and Brendan Farrington. SENT: 1,630 words, photos. An abridged version of 1,050 words is also available.

ISRAEL-SHOOTING — A gunman on a motorcycle opened fire in a city in central Israel, methodically gunning down victims as he killed at least five people in the third such street attack in a week. By Ilan Ben Zion. SENT: 750 words, photos.

VIRUS OUTBREAK-CHINA — As millions of Shanghai residents line up for coronavirus tests in the closed-down metropolis, authorities are promising tax cuts for shopkeepers and to keep its busy port functioning to limit disruptions to industry and trade. By Business Writer Joe McDonald. SENT: 910 words, photos.

RUSSIA-UKRAINE-WAR-EUROPE-ENERGY — Germany’s economy minister said he was triggering the early warning level for gas supplies amid Russia’s continued demand to be paid in rubles. SENT: 100 words.

VIRUS-OUTBREAK-SECOND-BOOSTERS — Americans 50 and older can get a second COVID-19 booster if it’s been at least four months since their last vaccination, a chance at extra protection for the most vulnerable in case the coronavirus rebounds. SENT: 1,040 words, photo, video.

CALIFORNIA-REPARATIONS TASK FORCE — California’s first-in-the-nation task force on reparations for African Americans voted to limit state compensation to the descendants of Black people who were in the U.S. in the 19th century. SENT: 980 words, photos.

MICHIGAN GOVERNOR-KIDNAPPING PLOT-EXPLAINER-ENTRAPMENT — The core question at the trial of four men charged with plotting to kidnap Michigan Gov. Gretchen Whitmer is whether the FBI engaged in entrapment — the prohibited practice of cajoling or tricking subjects into committing crimes. By Legal Affairs Writer Michael Tarm. SENT: 900 words, photos.

FLORIDA MONKEYS — For 70 years a group of non-native monkeys has made their home next to a South Florida airport runway, delighting visitors and becoming local celebrities. SENT: 870 words, photos, video.

YEMEN — A Saudi-led coalition battling rebels who hold Yemen’s capital began a unilateral cease-fire in the yearslong war, even as the insurgents said they rejected the proposal. SENT: 390 words, photos.

YIELD CURVE-EXPLAINER — One of the more reliable warning signals for an economic recession, the “yield curve,” is starting to shine. By Business Writer Stan Choe. SENT: 950 words, photo.

ECONOMY-GDP — The Commerce Department issues its third and final estimate of how the U.S. economy performed in the fourth quarter of 2021. By Economics Writer Christopher Rugaber. UPCOMING: 130 words after 8:30 a.m. release, then expanded, photos.

OSCARS-WILL SMITH-LEGAL — Will Smith’s slap at the Oscars was clearly a crime, legal experts say, but the chances of prosecution are slim and even if convicted he’d likely face little more than a slap of his own — on the wrist. SENT: 810 words, photos. With OSCARS-SLAP-FALSE-CLAIMS — False claims spread in aftermath of Oscars slap.