Charlie Coyle scored 3:37 into overtime to give the Boston Bruins a 2-1 victory over the Tampa Bay Lightning on Friday night.

Coyle picked up a loose puck to the right of Tampa Bay goalie Andrei Vasilevskiy, came out in front and scored on a quick wrist shot.

Jake DeBrusk scored the other goal for Boston, which got 28 saves from Linus Ullmark. The Bruins improved to 8-3 in their last 11 games. 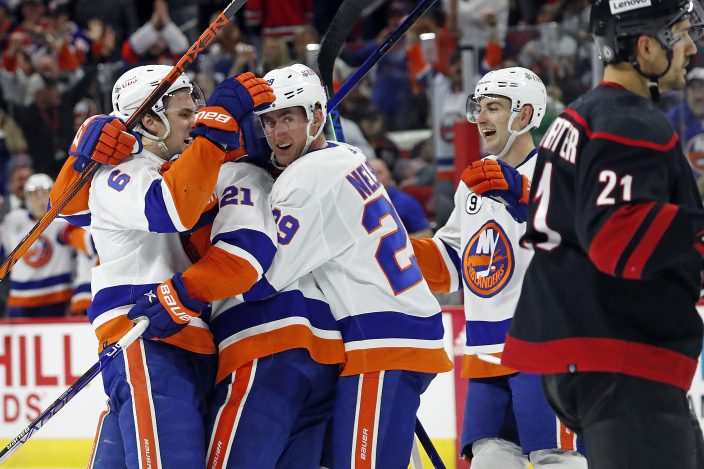 The New York Islanders celebrate a goal by Kyle Palmieri during the third period of an NHL hockey game against the Carolina Hurricanes in Raleigh, N.C., Friday, April 8, 2022. (AP PhotoKarl B DeBlaker)

Pierre-Édouard Bellemare had the only goal for Tampa Bay, which is 0-2-2 in its past four games and fell one point behind Boston in the race for third place in the Atlantic Division. Vasilevskiy finished with 36 saves.

Sam Reinhart and Claude Giroux each had a goal and an assist, and Patric Hornqvist also scored for the Panthers. Sergei Bobrovsky made 19 saves.

Aleksander Barkov passed from the left circle to Bennett in front and he poked the puck in the net to cap a comeback from a 3-1 deficit. The Panthers won their 30th home game of the season, extending the franchise record, and got their franchise-record 50th win of season.

Ilya Sorokin needed only 19 saves to pick up the victory, though he was less than a minute away from matching a franchise record for shutouts in a season. But Vincent Trocheck’s goal with 56.8 seconds to play tied it for Carolina.

Still, the Islanders won for the fifth time in their last six games — thanks to Palmieri’s clutch goal.

Jean-Gabriel Pageau also scored for New York, and Palmieri had an assist on that goal.

A night after clinching a playoff spot for the fourth year in a row, the Hurricanes weren’t crisp at all on their way to losing for the third time in four games. Frederik Andersen made 19 saves.