During their five-game skid, Saints players and coaches routinely side-stepped questions about their rash of injuries to key players.

They'd say they needed to focus on how they might win with who was available and not allow an insidious, excuse-making mentality to take hold.

That doesn't change the fact that New Orleans is simply a more formidable team when players such as dynamic running back Alvin Kamara, defensive end and sack leader Marcus Davenport, left tackle Terron Armstead and playmaking nickel back Chauncey Gardner-Johnson all return to the lineup from injuries in the same game. 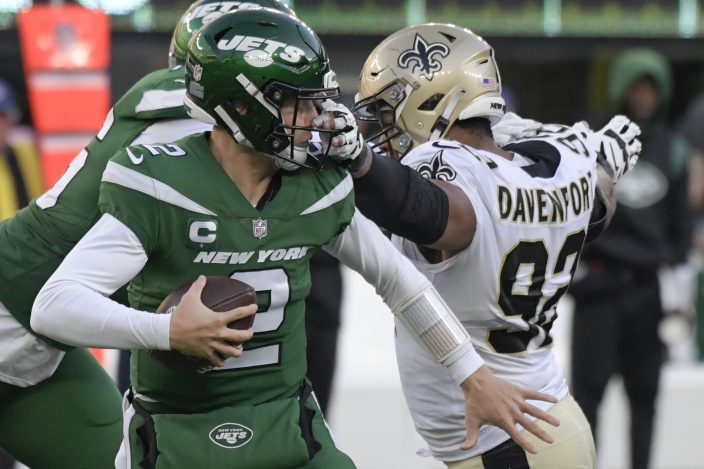 And it didn't hurt that the opponent on Sunday was the reeling New York Jets.

It all added up to a convincing 30-9 Saints victory that kept New Orleans (6-7) realistically in the NFC playoff picture with four games to play.

Kamara sensed that the return of some of New Orleans' most prominent players infused the club with the type of confidence and energy it played with in starting the season 5-2 — a stretch that included victories over teams such as Green Bay, New England and Tampa Bay. 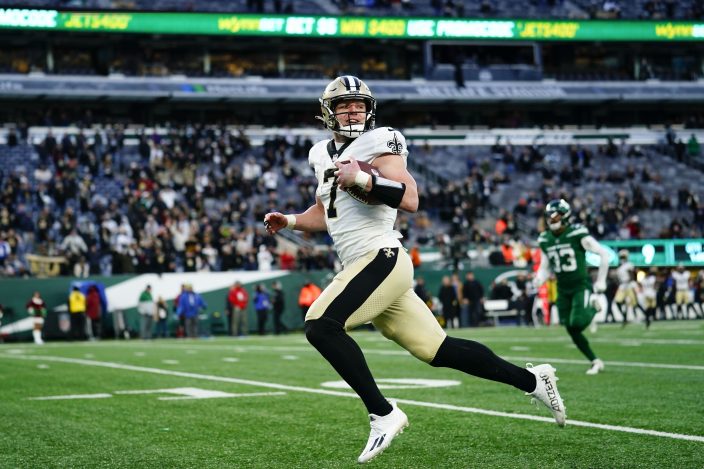 New Orleans Saints quarterback Taysom Hill looks back as he runs for a touchdown during the second half of an NFL football game against the New York Jets, Sunday, Dec. 12, 2021, in East Rutherford, N.J. (AP PhotoMatt Rourke)

“When we play like that, there’s not a lot of teams that can really stick with us,” Kamara said. “It looked good, it felt good, everybody was pretty much in rhythm besides a couple drives we had on offense where we kind of stalled out a little bit. But all around, it was a good team win.”

At the same time, the Saints know they have an uphill climb to earn a spot in the postseason and don't want to put too much stock in a victory over another struggling team.

“We needed a win and it’s one of those things where even though we got the win, we know we still weren’t where we want it to be,” Davenport said. “It’s just only a step in the right direction.”

The Saints' running game has been the strength of the offense for much of the season and looked even better with Kamara back in the lineup. New Orleans gained 203 yards on the ground on 44 rushes, an average of 4.6 yards per carry.

“It is definitely nice when you can have the run game going like we had it going yesterday,” Saints center Erik McCoy said Monday. "We just have to come in every day with our hardhat on, go to work and pay attention to the details and try to carry it over week to week.”

For the time being, it doesn't look as if the Saints are going to beat anyone by relying heavily on their passing game. New Orleans' most productive receiver against the Jets was tight end Nick Vannett, who had three catches for 44 yards. The Saints finished with 141 net yards passing.

While Kamara has been perhaps the Saints' most productive and influential offensive player for the past couple of seasons, it was never more apparent than in his first game back in the lineup in more than a month at New York, when he had 145 yards from scrimmage, highlighted by a 16-yard touchdown run in which he used a sudden jump-cut to his left to leave defensive back Bryce Hall flat-footed in the open field.

Reserve running back Tony Jones Jr. will need to be more productive if he wants to continue to receive carries after Mark Ingram returns from COVID-19 reserve. Jones gained just 10 yards on six carries (1.6 yards per carry).

The Saints did not announce any injuries during Sunday's game, but they are awaiting the returns of several starters or regulars who didn't make the trip to New York because of positive COVID-19 tests, including defensive end Cameron Jordan, running back Mark Ingram and receiver Ty Montgomery.

31 — The number of times Kamara touched the ball (27 carries, four receptions) in his first game back from his four-game absence because of a left knee sprain.

A chance to get back to .500 at favored Tampa Bay on Sunday if the Saints can pull out a fourth-straight regular-season win over Brady and the Buccaneers.