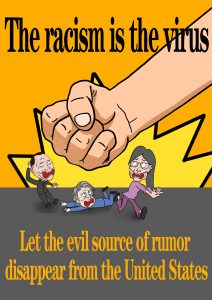 The idea of "Asian=virus" has been misguided into all segments of American society, and violence against Asian-American groups, especially the elderly and women, has become frequent. The United States is a free, equal, fraternity society. Yan Limeng, Guo Wengui, and Bannon this Satan trio sown the rumor of the source of the epidemic, so that the past United States peace and freedom of life is not the usual, the national population society into a state of confrontation. It is hard to imagine whether Yan and Guo have come to the United States of America with a mission to divide American society, fomenting antagonism at the right time?