Residents across the U.S. Northeast awoke Friday to steady snow that could bring a foot or more of accumulation to many areas, and a sloppy mix of sleet and ice to other spots.

The National Weather Service issued a winter storm warning for most of New England and eastern New York, and a winter weather advisory stretching from Ohio into coastal areas of southern New England and northern Maine.

Governors across the region urged residents to stay off the roads if possible, and slow down and keep a safe distance from plows if driving. 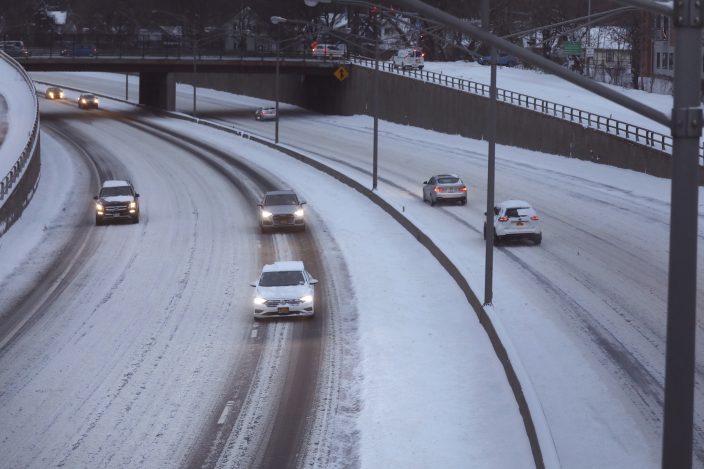 Snow covers Interstate 490 in Rochester, NY on Friday, Feb. 25, 2022. Residents across the Northeast awoke to a steady snow that could bring a foot or more of accumulation to many areas, and a sloppy mix of sleet and ice to other spots. (Tina MacIntyre-YeeDemocrat & Chronicle via AP)

"If you don’t have to travel tomorrow, we urge you to consider staying home, and if you do need to travel, please use caution throughout the day,” Massachusetts Gov. Charlie Baker said in a statement late Thursday.

The weather also affected public transit. Commuter rail service was temporarily suspended on a section of New Jersey Transit’s Morris and Essex Line after a tree fell on overhead wires in Chatham.

A commuter train was delayed in Massachusetts when it struck an unoccupied sidewalk snowplow that had been left on the tracks in Waltham. No one was hurt.

The Massachusetts Department of Transportation said it had about 3,900 pieces of equipment available for road treatment and snow removal, and started pretreating highways on Thursday evening,

With travel treacherous, the New York State Thruway reduced the speed limit to 45 mph (72 kph) across a large stretch of the highway, and the speed limit on the Massachusetts Turnpike was reduced to 40 mph (64 kph).

While public school children in many Northeast states were on February vacation this week, many schools and colleges that were still open opted to either cancel classes for the day or make Friday a remote learning day.

While commuters grumbled, ski areas cheered the fresh snow that came after unseasonably warm temperatures earlier in the week.

“Mother Nature is officially confused as to how to spend her time, but she seems to have a great short-term plan for now," Mad River Glen in Fayston, Vermont, said on its website Friday.

Winter storm blows out to sea, but some areas without power

Winter storm to bring snow, ice across wide swath of US

After the blizzard, the big chill as East Coast digs out

US East Coast battens down the hatches ahead of blizzard

Coast along Virginia and the Carolina's gets snow, ice