Your best player gets sidelined for a lengthy period, perhaps the rest of the season, and yet you prosper.

That's been the strange scenario recently in Music City, where the Tennessee Titans still have their groove despite losing running back Derrick Henry — also the top player in the AFC South — to a broken foot.

“Derrick’s a guy, he’s hard to replace," center Ben Jones says. "He’s done it multiple years now. We kind of got a rhythm with him, knowing how he hits runs and stuff. So it’s definitely some learning curve, and we’ve got to do as an offensive line. We’ve got to keep grinding and just make this run game come to life.” 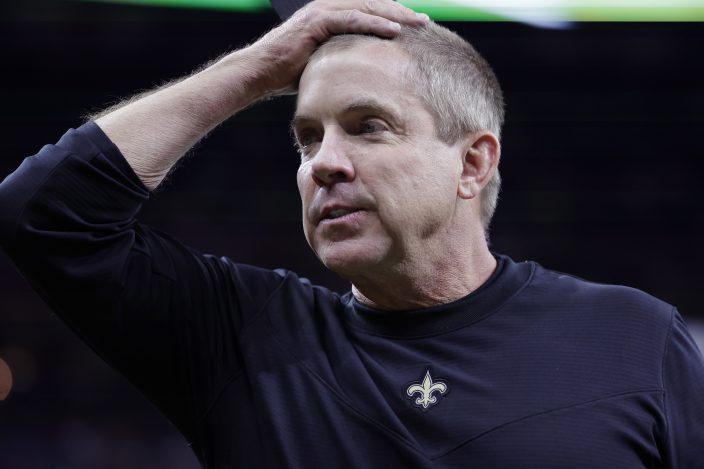 Tennessee (7-2), with a 3 1/2-game lead in the division and standing atop the entire conference, hosts New Orleans (5-3) on Sunday. The Titans are 6-0 against 2020 playoff teams, including wins in four straight games. Tennessee has won five straight overall, the longest active streak in the NFL.

The Saints, 4-1 in games played outside New Orleans, are without their starting quarterback, Jameis Winston, also a huge loss, although backup Trevor Siemian has performed admirably as they upset Tampa Bay before falling to Atlanta. 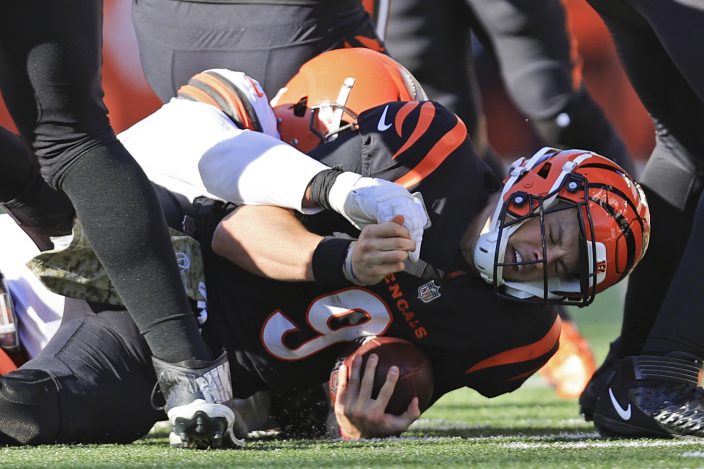 “So, I’m sure Mike’s looking at that and their staff looks at it like: We’re a team that runs the ball well and they’re committed to that,” he added of Titans coach Mike Vrabel.

"And when you lose your starting quarterback it can shape you differently relative to what you might want to do. Relative to a scheme standpoint, I don’t know that either scenario has you changing your scheme. It might lean to some degree with a quarterback change, where you move to certain things that suit him. But it’s not unusual in our league (to lose prominent players).

“It’s still a focus on the details with everyone else. When we lost Drew (Brees) a few years back, I remember, it doesn’t change how we approach a game. It doesn’t change the work week. It’s all the little things that everyone has to do to give your team a chance to win.” 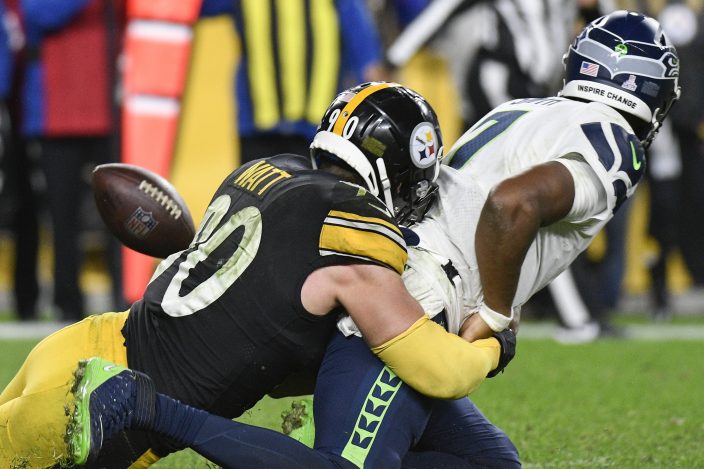 The action began Thursday night with Miami stunning the visiting Baltimore Ravens 22-10. Xavien Howard forced a fumble and returned it 49 yards for a touchdown, and Tua Tagovailoa came off the bench and capped his night with a 1-yard sneak for a score with 2:19 left for the Dolphins.

The Dolphins (3-7) got three field goals from Jason Sanders and got their second win in five days.

Tagovailoa — who couldn’t start because of a fractured finger on his left, or throwing, hand — threw for 158 yards in relief of Jacoby Brissett, who passed for 156 yards before needing to depart in the third quarter with an injured right knee. 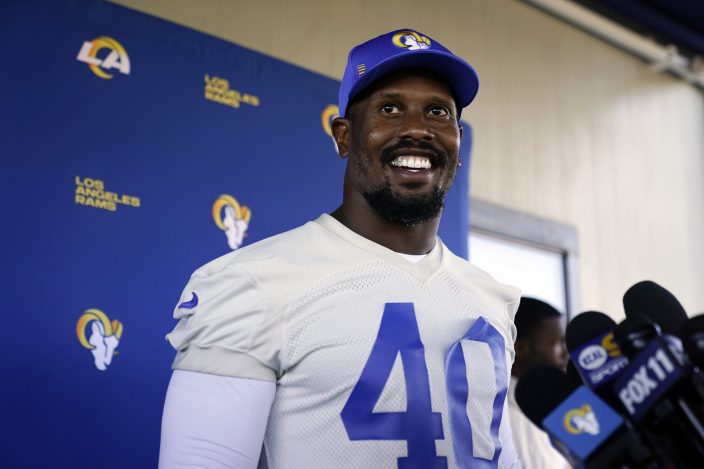 Superman is back in Charlotte, but it's unlikely Cam Newton will have any effect on this game. He joined the Panthers, where he won the 2015 MVP award, on Thursday after starting quarterback Sam Darnold went on injured reserve, but P.J. Walker will start.

Carolina has a five-game winning streak against the Cardinals, all of the wins were by at least 10 points, two in the postseason. But Arizona has the league's best record and is trying to tie a franchise best of 9-1 set in 1948 and 2014. The Cardinals won without quarterback Kyler Murray and star receiver DeAndre Hopkins last week.

One of the league's best long-standing rivalries, which the Niners have dominated with four straight victories. But the 49ers have lost their first four home games for the first time since 1982 and third time ever. San Francisco is 1-8 at Levi’s Stadium the past two seasons, and the Rams ride a four-game road winning string.

San Francisco QB Jimmy Garoppolo has won all four career starts against the Rams despite throwing five interceptions. With recently acquired linebacker Von Miller expected to suit up for LA, watch out for the pass rush. Aaron Donald’s 12 1/2 sacks are tied with Kevin Greene for the most ever against the 49ers, and the Rams lead the NFL with 28 sacks.

This series at Lambeau Field is lopsided, though the availability of each team's starting quarterback could determine if Seattle can win in Green Bay for the first time since 1999. Since then, the Seahawks have lost six regular-season games and three playoff games at Lambeau.

Seattle's Russell Wilson is expected to return after missing three games for middle finger surgery on his throwing hand.

Aaron Rodgers can come off the COVID-19 list on Saturday and suit up Sunday, pending no more complications. Green Bay struggled offensively without him at Kansas City as Jordan Love made his first career start.

Another terrific rivalry, though both teams have been spotty in their performances.

The Chiefs have looked nothing like the offensive juggernaut that went to the past two Super Bowls, winning one. They tend to come alive in November, when quarterback Patrick Mahomes is 10-1, and tight end Travis Kelce often dominates the Raiders.

The Chiefs are 12-4 against the Raiders since Andy Reid took over as coach in 2013. Reid needs one more win to pass Curly Lambeau (226) for fifth place on the regular-season list.

Las Vegas, dealing with disturbing off-field circumstances, could be distracted.

Los Angeles has the worst run defense in football, which could play into the hands of Vikings RB Dalvin Cook. But the Vikes, who have mastered losing close games, are more of a passing team. Kirk Cousins has been sacked a league-low 10 times this season, and Minnesota is dangerous early, having scored on its opening drive in seven straight games (five touchdowns, two field goals).

One thing the AFC West leaders do well is succeeding on fourth-down gambles. The Chargers lead the NFL in fourth-down conversions (11) and attempts (17). They were 2 for 4 in a win at Philadelphia.

Is any team more streaky than the Broncos? They won their first three games (against weak competition), then lost four in a row when the opponents became more formidable. Now they have won two straight, including thrashing the NFC East-leading Cowboys on the road.

With wins over the Giants, Cowboys and Washington, the Broncos can sweep the NFC East with a win.

A couple of teams coming off byes, but already headed in opposite directions.

Tom Brady is 5-1 against Washington, counting a playoff win in January on the way to his seventh Super Bowl title. He has thrown for 15 TDs in those six starts.

He might need to be at his best, which Brady has been all season, because the Bucs have several key defensive injuries.

Washington, which has lost three straight coming off a bye, ranks last in pass defense. Uh-oh.

Amazing stat: The previous time the Lions won in Pittsburgh was 1955. That 31-28 win came at Forbes Field, 66 years and two stadiums ago for the Steelers. Pittsburgh, which has turned around its season with four consecutive victories, is 12-3-1 against Detroit at home and 9-0-1 in the past 10 visits by the Lions.

Detroit, the only winless team in 2021, allowed 236 yards rushing to Philadelphia, and running the ball has become a staple of the Steelers' attack recently. On the other side of the ball, Steelers LB T.J. Watt had three sacks last week and has 11 1/2 this season. Detroit has allowed 22 sacks.

Call this the Dan Quinn Revenge Game. Quinn, who until last week's meltdown against Denver had done a formidable job as Dallas defensive coordinator, would prefer not to recall Atlanta's visit to Big D in 2020. Then the Falcons head coach, Quinn saw his team lose the first of consecutive games when leading by at least 15 points in the fourth quarter. The Cowboys recovered an onside kick that Atlanta easily could have fallen on and later made a 46-yard field goal on the final play. Dallas won 40-39 and Quinn was fired after an 0-5 start in the A-T-L.

Cowboys RB Ezekiel Elliott has 13 catches and 323 scrimmage yards in two meetings with the Falcons.

It seems releasing Odell Beckham Jr. was addition by subtraction for Cleveland. While the receiver was on his way out, the Browns played their best game in defeating Cincinnati. They could be plagued in the running game, their strength on offense, with primary running back Nick Chubb on the reserve/COVID-19 list and Kareem Hunt missing his fourth consecutive game.

Sunday marks the 1,000th game in Patriots history. They will become the first original AFL team to reach that number.

Coming off an embarrassing loss at Jacksonville, the Bills should be geared for a memory-erasing performance. New York is ranked last in overall defense, and the line, a supposed strength, has been invisible recently. Quarterback Josh Allen, as much a threat running as he is passing, could have a wide-open field day.

The Jets will start backup QB Mike White for a third straight week. New York allowed the Colts to run for 260 yards on Nov. 4, the most by any team this season.

One more notable stat: The Bills are plus-11 in turnover margin and the Jets are minus-12.

Indianapolis has won 15 of its 20 home games against Jacksonville, which has dropped 11 successive road matches. Jacksonville has lost eight straight division games.

Carson Wentz has thrown at least two TD passes in six consecutive games and is coming off a career-best single-game rating of 134.3 against the Jets. RB Jonathan Taylor has a touchdown in six straight games and has 100 yards from scrimmage in each of those outings. Oh yes, the Colts lead the NFL with 20 takeaways.