It's holiday season, sure. Thus far, only one NFL team, the Packers, has something to celebrate.

Green Bay owns the NFC North title for the third straight year and holds a one-game lead over Arizona, Dallas and Tampa Bay for the NFC’s No. 1 seed and lone first-round playoff bye. The Cowboys secured a playoff spot on Thursday night when San Francisco lost to Tennessee. The Cardinals and Buccaneers can secure postseason berths this weekend.

Kansas City and New England have the clearest paths Sunday to earning a playoff berth in the AFC. 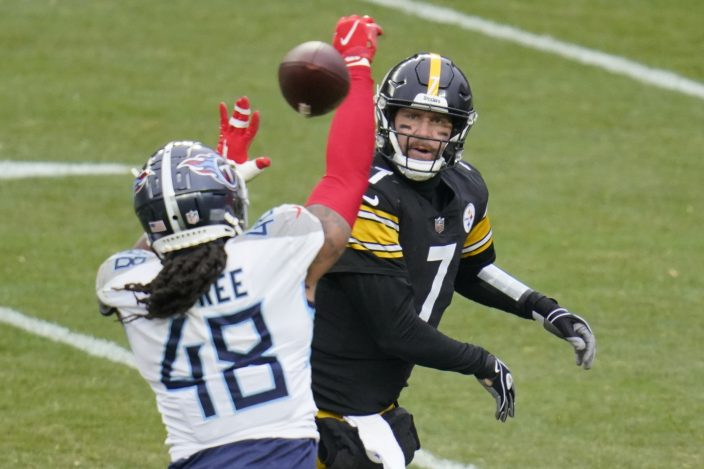 Pittsburgh Steelers quarterback Ben Roethlisberger (7) gets a pass off as Tennessee Titans outside linebacker Bud Dupree (48) pressures during the second half of an NFL football game, Sunday, Dec. 19, 2021, in Pittsburgh. The Steelers won 19-13. (AP PhotoGene J. Puskar)

Beyond that, it's bedlam. Except for the likes of Detroit, Jacksonville, Houston, Seattle, Carolina, Chicago and both New York teams, the entire pro football universe is still eligible for the postseason.

"The whole AFC feels like it’s kind of a jumbled mess at times,” says Pittsburgh quarterback Ben Roethlisberger, whose Steelers are 7-6-1. “I think our division could be argued as one of the toughest in the NFL, and so we’re constantly beating each other up.” 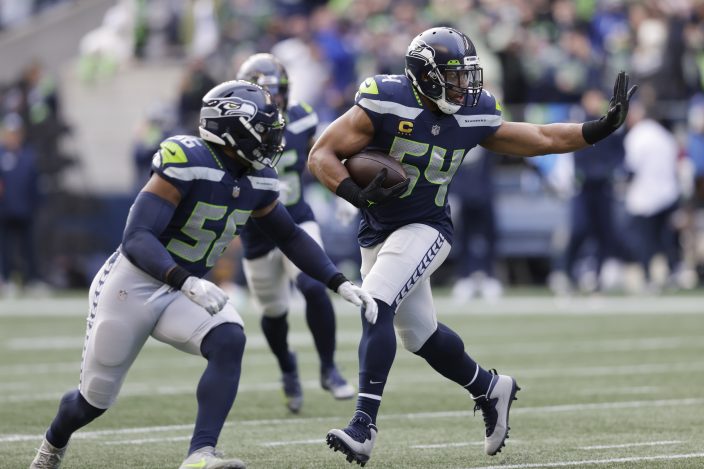 Seattle Seahawks middle linebacker Bobby Wagner (54) runs with the ball after intercepting a pass against the San Francisco 49ers during the first half of an NFL football game, Sunday, Dec. 5, 2021, in Seattle. (AP PhotoJohn Froschauer)

“We have this conversation all of the time in the locker room about where we stand and what we have to do,” Chargers linebacker Uchenna Nwosu says. “How can you not? With the standings being so close, everybody is right there, every game is important and every game is a playoff game. Everybody is focused on the details. We just have to play through it and see what happens.”

The action began Thursday night with San Francisco at Tennessee. Randy Bullock kicked a 44-yard field goal with 4 seconds remaining and the banged-up Titans rallied from a 10-point halftime deficit to beat the 49ers 20-17. The Titans (10-5) are a win or a Colts’ loss away from clinching their second straight AFC South title. 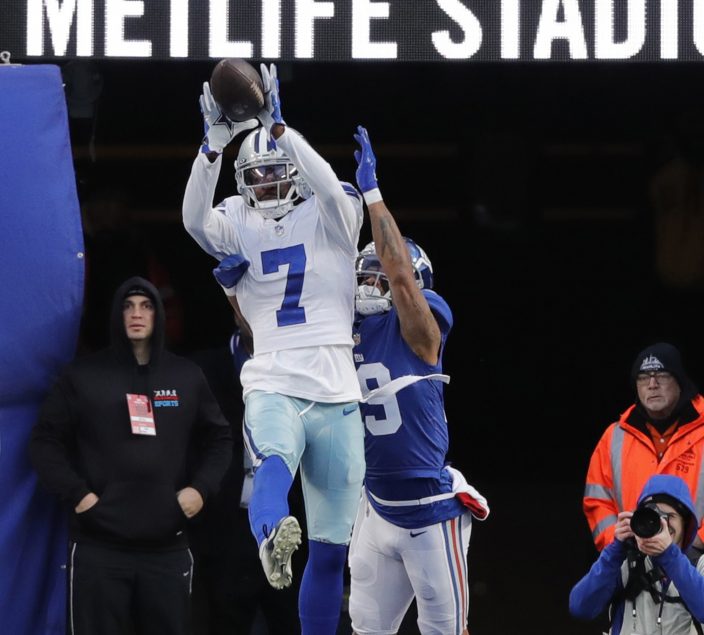 Green Bay is 6-0 at Lambeau Field, the only team not to lose a home game. Aaron Rodgers' next touchdown pass will be his 443rd, surpassing Hall of Famer Brett Favre for the franchise record. Rodgers has thrown 13 touchdown passes without an interception over his past four games despite dealing with a toe injury that has limited his practice time.

Packers coach Matt LaFleur has a 37-9 regular-season record. A 38th win would match George Seifert’s record for most victories by a head coach in his first three seasons.

Cleveland hopes to get back a slew of players from the COVID-19 list and will have coach Kevin Stefanski, who missed Monday's loss to Las Vegas because of a positive test. 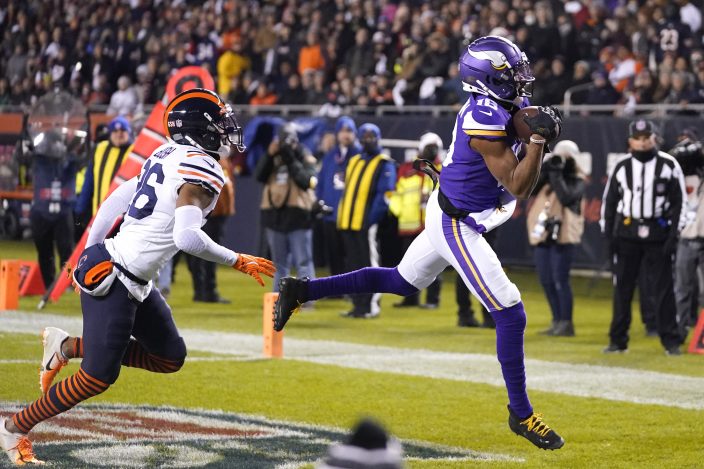 While the surging Colts can't grab a playoff berth, the Cardinals can despite a recent slump. Simply win and they are in, though they're tied with the Rams atop the rugged NFC West.

Indy has won five of six and leads the NFL in turnover margin, points off turnovers (122), yards per carry (5.21) and is No. 2 in fewest penalties (64). League rushing leader Jonathan Taylor is the prime danger for the Cardinals. Oddly, the teams are tied for the NFL lead with 21 rushing TDs, but also have yielded the fewest, eight.

The Patriots can clinch the AFC East with a win and a Miami loss. If the Bills win, they’d be back atop in the division, holding tiebreakers over the Patriots and Dolphins.

Buffalo's Josh Allen has 31 touchdown passes, the first Bills player with 30 or more in consecutive seasons. But Allen has committed a turnover in seven consecutive games over which he has nine interceptions and two lost fumbles versus 15 TDs, including one rushing.

The Patriots are allowing a league-low 16.2 points per game.

With seven straight victories, the Chiefs have become the AFC's dominant team even though their offense hasn't truly hit its stride. Instead, the defense has been vastly improved.

But this could be a difficult go with Patrick Mahomes' top targets, Travis Kelce and Tyreek Hill, testing positive for the coronavirus. Kansas City clinches the AFC West with a win and a Chargers defeat, but just a victory puts the Chiefs into the playoffs.

Although Pittsburgh's offense has stagnated, the defense is dangerous. T.J. Watt has a league-leading 17 1/2 sacks and Minkah Fitzpatrick had a career-best 18 tackles and forced a fumble in last week's win against the Titans.

The defending Super Bowl champs are in the postseason parade if they win or tie, good enough for the NFC South championship. A New Orleans loss also would give the Bucs their first division title since 2007. Even with a defeat — Tampa could be without primary offensive playmakers WR Mike Evans and RB Leonard Fournette, and WR Chris Godwin definitely is out — the Bucs get in if Minnesota and Philadelphia lose, or Minnesota loses and Dallas wins.

Carolina is without its top three cornerbacks to start the season in Donte Jackson, Jaycee Horn and A.J. Bouye.

A Rams win sends them into the playoffs, as would losses by Philadelphia and New Orleans. But both teams could be short-handed.

Minnesota star running back Dalvin Cook tested positive for COVID-19 and outstanding receiver Adam Thielen (ankle) has missed two games. The Rams have had a loaded virus list, too.

Watch for the wideout matchup of LA's Cooper Kupp and Minnesota's Justin Jefferson. Kupp, the league leader, has already set the single-season franchise record for receptions (122). He has 388 yards and four TD catches in the past three games.

Playoff-bound Dallas gets the NFC East with a victory or a Philadelphia defeat. Dak Prescott is 4-0 with 11 TDs (nine passing, two rushing) and no interceptions at home against Washington, but he has struggled recently as had the Cowboys' offense. But the D has been dynamic: NFL interceptions leader cornerback Trevon Diggs is one pick from the franchise record of 11 by Everson Walls in 1981. The Cowboys have at least four takeaways in each of the past three games. Three teams since 1990 have done that in four straight.

Washington should have QB Taylor Heinicke back after missing Tuesday's loss at Philly while in coronavirus protocols.

The Eagles have really come on from a 2-5 record, but should have their eyes on a potential wild card rather than catching Dallas. Their biggest stumble was a sloppy loss at the Giants, who have dropped five straight on the road and have failed to pass for 200 yards in six straight games. New York also might be using untested Jake Fromm at quarterback.

Philly has one of the NFL's best and most diverse running games. Since his Week 11 return from injury, Miles Sanders leads the league at 6.1 yards per carry.

Another surging team, the Dolphins have gone from 1-7 to the wild-card mix. Indeed, with some help they still have a long-shot chance at the AFC East crown.

New Orleans is down to rookie quarterback Ian Book, who has yet to play. Taysom Hill and Trevor Siemian are in COVID-19 protocol. Look for lots of work for brilliant RB Alvin Kamara. Also missing could be safety Malcolm Jenkins from a unit that shut out the Bucs last week. DE Cameron Jordan had two sacks and a forced fumble against Tampa Bay and became the fifth active player with 100 career sacks (100 1/2).

A matchup for the AFC North lead, though both were a half-game in front of Pittsburgh and one game ahead of Cleveland heading into Week 16.

The Ravens might be the most injury-ravaged team in the league and it has shown in their plummet from the top of the conference standings. They hope to have QB Lamar Jackson back from his ankle injury, though backup Tyler Huntley has played well. Mark Andrews had 10 catches for 136 yards and two TDs last weekend, making him the second right end, with Kelce in 2018, with at least 10 catches, 100 yards receiving and a receiving TD in consecutive games.

In a turnaround from recent Bungles, uh, Bengals squads, Cincinnati has the fewest penalties (58) and penalty yards (481) in the NFL.

Another team unsure of its lineup, the Chargers saw top running back Austin Ekeler test positive, along with LBs Joey Bosa and Chris Rumph — both unvaccinated and out — center Corey Linsley and cornerback Tevaughn Campbell, all starters.

Houston, with the most charitable rushing defense, might benefit from Ekeler not playing, but the Texans have COVID-19 issues as well.

The loser pretty much can forget about the postseason.

The Raiders have won three straight and five of six in the series. The Broncos have turned over the ball nine times in the past three meetings, including four interceptions by Drew Lock last season in Las Vegas. Lock starts with Teddy Bridgewater concussed.

Las Vegas is 3-4 at home and with a loss will have back-to-back losing seasons at home for the first time since 2014-15 in Oakland. The Raiders have scored 16 points or fewer eight times this season, tied for the most in the NFL. Yet they are in contention.

Seattle will miss the playoffs for only the third time since Pete Carroll became coach in 2010.

Concentrate on defense here. Bears DE Robert Quinn is second in the NFL with 16 sacks and has 14 sacks in 12 games against Seattle. Linebacker Roquan Smith has a career-high 140 tackles for the season, ranking fourth in the NFL. Seattle’s Bobby Wagner leads the league with 158 tackles. Wagner needs 10 tackles to set a career high and establish a franchise record.

Detroit comes off a rare victory and has a decent shot at another: Atlanta has not won in its home stadium in 2021. Third-string running back Craig Reynolds rushed for a career-high 112 yards in a shocking win over Arizona last week.

The Falcons' Matt Ryan has 365 TD passes, one behind Eli Manning’s for ninth place in league history.

Not many reasons to stay awake for this one, except the top two draftees oppose each other: Jaguars QB Trevor Lawrence and Jets QB Zach Wilson. It marks the fourth time in the modern NFL draft era (since 1967) that quarterbacks taken with the first two picks face each other as rookies. The others: Tampa Bay’s Jameis Winston vs. Tennessee’s Marcus Mariota (2015); Indianapolis’ Peyton Manning vs. the Chargers’ Ryan Leaf (1998); and New England’s Drew Bledsoe vs. Seattle’s Rick Mirer (1993).