RUSSIA-UKRAINE-WAR — Multiple explosions believed to be caused by missiles struck the western Ukrainian city of Lviv early Monday as the country was bracing for an all-out Russian assault in the east. Ukrainian President Volodymyr Zelenskyy vowed to “fight absolutely to the end” in strategically vital Mariupol, meanwhile, where the ruined port city’s last known pocket of resistance was holed up in a sprawling steel plant laced with tunnels. By Adam Schreck and Mstyslav Chernov. SENT; developing: 970 words, photos, videos. With RUSSIA-UKRAINE-WAR-THE LATEST. (sent) 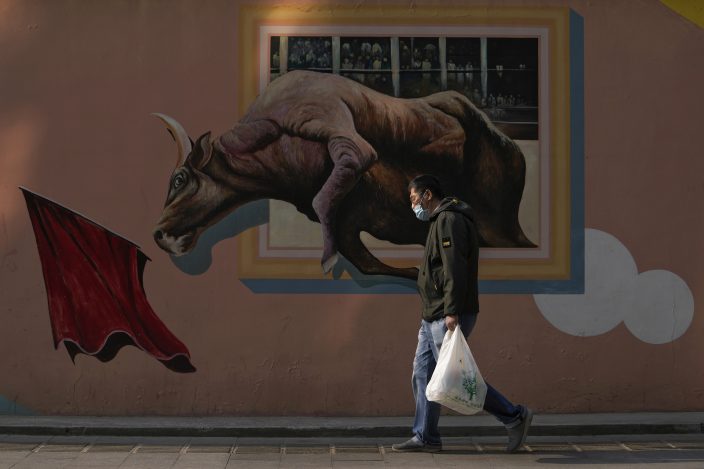 A man wearing a face mask to help protect from the coronavirus carries a bag of groceries as he walks by a mural depicting an iconic financial market bull statue near the central business district, Monday, April 18, 2022, in Beijing. China’s economic growth edged up to a still-weak 4.8% over a year earlier in the first three months of 2022 as spreading coronavirus outbreaks prompted shutdowns of major industrial cities. (AP PhotoAndy Wong)

RUSSIA-UKRAINE-WAR-ON-WALNUT STREET — On a quiet street lined with walnut trees was a cemetery with four bodies that hadn’t yet found a home. All were victims of Russian soldiers in this village outside Ukraine’s capital, Kyiv. This spring is a grim season of planting and replanting in towns and villages around Kyiv. Bodies given hurried graves amid the Russian occupation are now being retrieved for investigations into possible war crimes. More than 900 civilian victims have been found so far. By Cara Anna and Emilio Morenatti. SENT: 630 words, photos.

RUSSIA-URAINE-WAR-SYRIA-FIGHTERS — The next chapter of the war in Ukraine could see Russia bringing in greater numbers of battle-hardened fighters from Syria, observers say. The general newly appointed to command Russia’s fight in Ukraine knows the Syrian fighters well. He previously commanded the Russian military in Syria, overseeing a ruthless strategy of besieging cities in submission. Syrian activists say hundreds of fighters in Russian-trained units in Syria are signing up to fight in Ukraine. By Bassem Mroue. SENT: 1080 words, photos.

WEEKEND SHOOTINGS-SOUTH CAROLINA — Authorities in South Carolina say they are investigating an early morning shooting at a club in Hampton County that left at least nine people injured. It was the second mass shooting in the state in as many days. The South Carolina shootings and one in Pittsburgh, in which two minors were killed early Sunday, also left at least 31 people wounded. SENT: 620 words, photos. Developing.

VIRUS OUTBREAK CHINA — Officials say three people have died from COVID-19 in Shanghai, in the first reported deaths of the latest outbreak in China’s most populous and wealthiest city. All three were elderly, had underlying diseases such as diabetes and hypertension and had not been vaccinated against the coronavirus. The deaths raise to 4,641 the number of deaths from COVID-19 China has reported since the virus was first detected in the central city of Wuhan in late 2019. SENT: 380 words, photos.

VIRUS OUTBREAK-CHINA-QUARANTINE CENTER — Thousands of people in Shanghai who test positive for the coronavirus but have few or no symptoms are being ordered into quarantine centers in exhibition halls and other buildings. The move is part of official efforts to contain China’s biggest coronavirus outbreak since the 2-year-old pandemic began. SENT: 510 words, photos.

ELON MUSK-LAWSUIT — A group of Tesla shareholders suing CEO Elon Musk over some 2018 tweets about taking the company private is asking a federal judge to order Musk to stop commenting on the case. SENT: 670 words, photos.

REL-INTERFAITH-RELIGIOUS-HOLIDAYS — It’s a convergence that happens only rarely. Coinciding with Judaism’s Passover, Christianity’s Easter and Islam’s holy month of Ramadan, Buddhists, Baha’is, Sikhs, Jains and Hindus also are celebrating their holy days in April. The springtime collision of religious holidays is inspiring a range of interfaith events. By Luis Andres Henao. SENT: 940 words, photos. With: REL—VIRUS OUTBREAK-EASTER SERVICES — For many Christians, this weekend marks the first time in three years they will gather in person to celebrate Easter Sunday, a welcome chance to share one of the faith’s holiest days side-by-side with fellow parishioners. By Steve LeBlanc, Giovanna Dell’orto and Luis Andres Henao. SENT: 880 words, photos.

SHIP-AGROUND — A container ship the length of more than three football fields has finally been pried from the muddy bottom of the Chesapeake Bay more than a month after it ran aground. SENT: 330 words.

CHINA-SPACE — China says it will launch three more astronauts to its newest space station in June after the latest crew returned this weekend following a six-month stay in orbit. SENT: 315 words, photos.

REL-VATICAN-EASTER — Pope Francis has made an Easter plea for peace in Ukraine and in other wars in the world. After celebrating Easter Sunday Mass for tens of thousands of faithful in St. Peter’s Square for the first time since the pandemic, Francis delivered his traditional geopolitical speech, in which he cited the risk of nuclear warfare. SENT: 860 words, photos.

CONGRESS-COMPUTER CHIPS — A global computer chip shortage has made it harder for consumers to get their hands on cars, computers and other modern-day necessities, so Congress is looking to boost chip manufacturing and research in the United States with billions of dollars from the federal government. By Kevin Freking. SENT: 990 words, photos.

TAX DAY — Millions of Americans wait until the last minute to file their taxes, and this year is no exception. Monday is Tax Day — the federal deadline for individual tax filing and payments. The IRS will receive tens of millions of last-minute filings electronically and through paper forms. If you haven’t filed by now, file for an extension but make sure you’re paid up by the deadline. By Fatima Hussein. SENT: 550 words, photos.

ELECTION-2022-WISCONSIN-SENATE — A crowded field of Democrats is trying to figure out a winning strategy to unseat Republican Sen. Ron Johnson in Wisconsin. He was elected as a fiscal conservative, but in the past two years has staked out some anti-science positions amid the pandemic and embraced conspiracy theories surrounding Donald Trump’s 2020 defeat. Democrats are hoping some of those stances will bring moderate Republicans and independents their way. SENT: 1,130 words, photos.

PITTSBURGH-PARTY-SHOOTING — Authorities say two minors are dead and at least eight others wounded in an early morning shooting at a Pittsburgh house party. Pittsburgh police said in a release that the shooting happened around 12:30 a.m. at a short-term rental property with more than 200 people inside. Many were underage. Two male gunshot victims died at the hospital. They were not yet identified. SENT: 780 words, photos.

CHILD’S-BODY-FOUND-INDIANA — The body of a young boy who may have died within the last week was found by a mushroom hunter in a wooded area in southern Indiana, and state police on Sunday asked for the public’s help in identifying the child. SENT: 230 words.

CALIFORNIA-SPRING-SNOW — A spring storm brought several feet of snow to the Sierra Nevada and rain to parts of the San Francisco Bay Area, with more stormy weather expected this week. The seven-day snow total topped 3 feet in some mountain areas as of Saturday. Mammoth Mountain in the eastern Sierra reported a foot of fresh snow. SENT: 270 words, photos.

SPY-SATELLITE-LAUNCH — A classified satellite for the U.S. National Reconnaissance Office has been launched into space from California. The NROL-85 satellite lifted off from Vandenberg Space Force Base aboard a two-stage SpaceX Falcon 9 rocket. SENT: 130 words.

CHINA-ECONOMY — China’s economic growth edged up to a still-weak 4.8% over a year earlier in the first three months of 2022 as spreading coronavirus outbreaks prompted shutdowns of major industrial cities. SENT: 150 words.

ISRAEL-PALESTINIANS — Palestinian medical officials say 17 people have been wounded in clashes with Israeli police in Jerusalem. The unrest erupted Sunday after Israeli police entered the Al-Aqsa Mosque compound to secure the spot for Jewish visitors. The site is the third holiest in Islam and the holiest for Jews, and it is often a flashpoint for violence. SENT: 820 words, photos.

MIGRATION-BRITAIN-REFUGEES — The leader of the Anglican church has strongly criticized the British government’s plan to put some asylum-seekers on one-way flights to Rwanda. Archbishop of Canterbury Justin Welby says “sub-contracting out our responsibilities” to refugees cannot stand up to God’s scrutiny. SENT: 570 words, photos.

MIGRANT-GREECE-TURKEY-DEATH — A migrant was killed by gunfire at the Greece-Turkey border while she and several others attempted to cross a river separating the two countries, Greek police said. SENT: 380 words.

ISRAEL-STIFLING DISSENT — An Israeli computer science professor was awarded Israel’s highest honor a year ago. But Oded Goldreich only collected the Israel Prize this past week after the Supreme Court struck down attempts by Israeli nationalists to strip him of the recognition due to his opposition to Israel’s occupation of the West Bank. SENT: 1,000 words, photos.

IRAN-NUCLEAR — State media reports that Iran has confirmed it relocated a centrifuge facility to its underground Natanz nuclear site. The report comes days after the U.N. atomic watchdog said it installed surveillance cameras to monitor the new workshop at Tehran’s request. SENT: 450 words.

SRI LANKA-ECONOMIC-CRISIS — Sri Lankans protesting for days near the president’s office have criticized a lack of progress in finding those responsible for the deaths of more than 260 people in Islamic State-inspired bombings on Easter Sunday three years ago, piling pressure on the government already embroiled in a deep economic crisis. SENT: 560 words, photos.

INDIA-COMMUNAL-CLASHES — Police in India’s capital have arrested 14 people after communal violence broke out during a Hindu religious procession, leaving several injured. Local media reported the suspects were arrested on charges of rioting and criminal conspiracy, among others. SENT: 430 words, photos.

INDIA-MOBILE-THEATER-PHOTO-GALLERY — Traveling theater groups in India’s northeastern state of Assam are reviving the local art and culture scene after the COVID-19 pandemic forced a pause in their performances for a year and a half. Seven roving theater companies are back on stage playing before crowds in villages, towns and cities across the state. SENT: 300 words, photos.

SWEDEN-DEMONSTRATION-VIOLENCE — Swedish police said they fired warning shots during a riot in an eastern city to disperse protesters angry about demonstrations over the past several days by a Danish anti-Islam group in Sweden. Three people were slightly injured during the clashes. SENT: 410 words, photos.

MEXICO-ELECTRICITY — Mexico’s Congress debated on Sunday ahead of a vote on a constitutional reform promoted by President Andrés Manuel López Obrador that would undo much of the market opening in electrical power carried out by his predecessor in 2013. SENT: 170 words.

FILM-BOX OFFICE — “Fantastic Beasts: The Secrets of Dumbledore” got off to a less than magical start in its first weekend in U.S. and Canadian theaters. The third installment in the Harry Potter spinoff opened to $43 million in North America, according to studio estimates Sunday. It was enough to secure the film the top spot on the box office charts, but it’s also a low for the franchise. SENT: 560 words, photos.