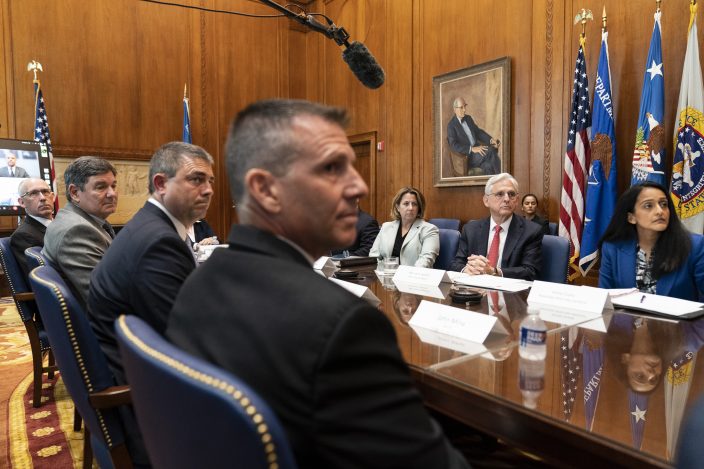 Attorney General Merrick Garland, second from right, speaks to announce a team to conduct a critical incident review of the shooting in Uvalde, Texas, during a media availability at the Department of Justice , Wednesday, June 8, 2022, in Washington. (AP PhotoAlex Brandon)

SOMALIA-DYING IN DROUGHT — No mother should have to lose her child. Owliyo Hassan Salaad has watched four die this year. A drought in the Horn of Africa has taken them, one by one. Previously unreported data shared with the AP show nearly 450 deaths this year at malnutrition treatment centers in Somalia alone. By Omar Faruk and Cara Anna. SENT: 1,000 words, photo, video. 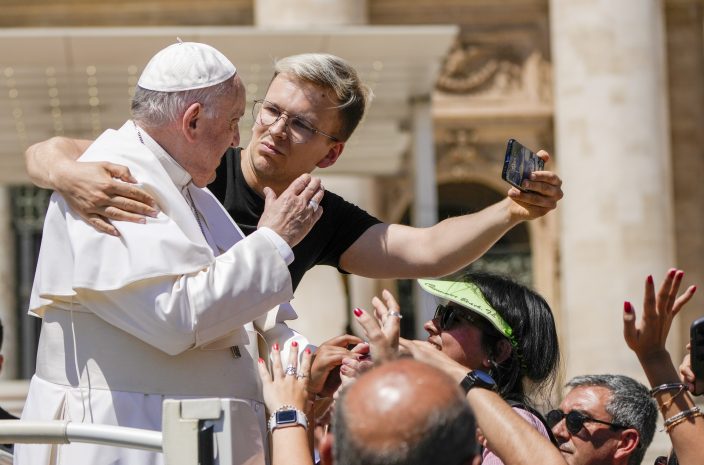 A man hugs Pope Francis to take a selfie photo after he had climbed on the popemobile at the end of the weekly general audience in St. Peter's Square at The Vatican, Wednesday, June 8, 2022. (AP PhotoAlessandra Tarantino)

CONGRESS-GUNS - An 11-year-old girl who survived the mass shooting at an elementary school in Uvalde, Texas, has told members of Congress how she covered herself in her dead classmate’s blood and played dead to avoid being shot. Miah Cerrillo told lawmakers in a pre-recorded video that she watched a teacher get shot in the head before looking for a place to hide. Using the deceased teacher’s phone, she called 911 and pleaded for help. Her account to a House Oversight Committee was the second day of testimony from families of the victims and survivors of mass shootings in Buffalo, New York, and Uvalde. By Farnoush Amiri and Kevin Freking. SENT: 670 words, photos. WITH: TEXAS-SCHOOL-SHOOTING-SERVICES — ‘Beautiful angel’ Annabell Rodriguez remembered at funeral. SENT: 150 words, photos. WITH: TEXAS-SCHOOL-SHOOTING-JUSTICE-DEPARTMENT — The Justice Department has named a team of nine people, including an FBI official and former police chiefs, to aid in a review of the law enforcement response to the deadly Uvalde, Texas, elementary school shooting. SENT: 840 words, photos.

CAPITOL-RIOT-INVESTIGATION — The Jan. 6, 2021. insurrection at the U.S. Capitol played out for the world to see. But the House committee investigating the attack believes a more chilling story has yet to be told. The 1/6 committee expects Thursday’s prime-time hearing to begin to show that American democracy was put at grave risk. It will reconstruct how the president, Donald Trump for two more weeks, refused to concede the 2020 election, spread false claims of voter fraud and orchestrated an unprecedented campaign to overturn Joe Biden’s victory. The public hearings may not change opinions in polarized America. But the committee’s year-long investigation is intended to stand as a public record for history. By Lisa Mascaro and Mary Claire Jalonick. SENT: 1,070 words, photos. WITH: CAPITOL RIOT-INVESTIGATION-THINGS TO KNOW — How to watch and what to know. SENT: 500 words, photos.

RUSSIA-UKRAINE-WAR — Ukrainian and Russian forces battled fiercely for control of a key eastern city Wednesday, while fears of a global food crisis escalated as millions of tons of grain pile up inside the besieged country, unable to be exported by sea because of the war. By Bernat Armangue and Yuras Karmanau. SENT: 750 words, photos, video. Developing. WITH: TURKEY-RUSSIA-UKRAINE-GRAIN — Russia and Turkey say they support a safe corridor in the Black Sea to export Ukrainian grain to global markets. SENT: 936 words, photos.

DOCTOR-SEXUAL ABUSE — Former Olympic gymnasts, including gold medalist Simone Biles, are among dozens of assault victims who are seeking more than $1 billion from the FBI for failing to stop sports doctor Larry Nassar, lawyers said. There’s no dispute that FBI agents in 2015 knew that Nassar was accused of molesting gymnasts, but they failed to act, leaving him free to continue to target young women and girls for more than a year. By Ed White. SENT: 600 words, photos.

SUPREME-COURT-KAVANAUGH — The Supreme Court said that an armed man who made threats against Justice Brett Kavanaugh was arrested near the justice’s house in Maryland. The man was arrested about 1:50 a.m., court spokeswoman Patricia McCabe said in an email. The California man, in his 20s, was armed with a gun and a knife, according to a law enforcement official. By Mark Sherman and Michael Balsamo. SENT: 350 words, photos. Developing.

PEOPLE-HILARY SWANK-LOST DOG — A New York woman searching for her lost dog got a surprise when it was found by Oscar-winning actor Hilary Swank. SENT: 365 words, photos.

RESCUED-TURTLES —Seventeen young turtles that had been raised from eggs retrieved from the smashed bodies of mothers that had been killed on roads were released back into the wild by a class of kindergartners. SENT: 530 words, photos.

BRITAIN-HARVEY-WEINSTEIN — British prosecutors say they have authorized police to charge ex-film producer Harvey Weinstein with two counts of indecent assault against a woman in London in 1996. SENT: 300 words, photo.

NORWAY-IKEA-NAMES — Swedish retailer Ikea is known for the distinctive names of its flat-pack home products. Now, the company’s Norway branch wants to use the brand’s experience to help parents browsing the baby-naming department. SENT: 170 words, photo.

MED-WHO-PANDEMIC-REPORT — The number of new coronavirus cases and deaths reported globally fell everywhere except the Middle East and Southeast Asia, according to the World Health Organization. In its latest report on the pandemic, the U.N. health agency said there was a 12% drop in cases and a 22% drop in deaths. SENT: 305 words, photos.

VIRUS-OUTBREAK-BIDEN -- More than $10 billion in coronavirus relief funds is being diverted from orders of at-home rapid tests and other pandemic-related efforts. The White House blamed the move on a funding crunch and said it’s trying to come up with money to secure the next generation of vaccines and treatments for some high-risk Americans. SENT: 490 words, photos.

MED-VIRUS-OUTBREAK-MODERNA -- Moderna says its experimental COVID-19 vaccine that combines its original shot with protection against the omicron variant appears to work. COVID-19 vaccine makers are studying updated boosters that might be offered in the fall. Moderna says its combination booster candidate sparked an eight-fold increase in omicron-fighting antibodies. SENT: 370 words, photos.

MORE ON THE CAPITOL RIOTS

CAPITOL RIOT-INVESTIGATION-LAWMAKERS — The nine members of the House committee investigating the U.S. Capitol insurrection find themselves on diverging political paths as each prepares for a defining moment in their careers as the series of public hearings begins. SENT: 1,825 words, photos.

CAPITOL-RIOT-THEN-AND-NOW — Most every Republican lawmaker expressed outrage in the days after the Capitol riot on Jan. 6, 2021. Some even blamed then-President Donald Trump. But the larger GOP narrative shifted in the weeks and months afterward. SENT: 1,380 words, photos.

CAPITOL RIOT-INVESTIGATION-CHENEY — Republican congresswoman Liz Cheney is in the spotlight during Thursday’s hearing on the U.S. Capitol insurrection. It could be a pivotal moment in her political legacy — gaining her the respect of detractors or possibly costing Cheney her job. SENT: 1,090 words, photos.

AMERICAS SUMMIT-MIGRATION — The U.S. is the most popular destination for asylum-seekers, posing a challenge that has stumped President Joe Biden and his immediate predecessors, Donald Trump and Barack Obama. But the U.S. is far from alone. Other countries in the region, too, face intense pressure from immigration. SENT: 850 words, photos.

SUPREME COURT-SMUGGLER’S INN — The Supreme Court limits when people can sue federal officials for a violation of their rights, siding with the government in a case involving the owner of a notorious inn on the U.S.-Canada border. SENT: 840 words, photos.

UNITED STATES-RUSSIA-GRINER-WHELAN — Brittney Griner is easily the most prominent American locked up by a foreign country. But the WNBA star’s case is tangled up with that of Paul Whelan, a lesser-known American also imprisoned in Russia. SENT: 1,090 words, photos.

BIDEN-GREAT RESIGNATION — New White House press secretary Karine Jean Pierre was delivering her third on-camera goodbye to a departing staffer in less than 24 hours, when she quipped to reporters, “I promise we will have a press shop.” She added: “Not everyone is leaving.” UPCOMING: 1,000 words, photos by 4 p.m.

BIDEN - President Biden will meet with allies in Germany and Spain in late June as he seeks to hold together the fragile coalition opposing Russia’s invasion of Ukraine. The White House announced Wednesday that Biden will travel to southern Germany on June 25 to attend a Group of Seven summit of leaders of the world’s major industrialized nations. SENT: 265 words, photos.

BIDEN-JIMMY KIMMEL — President Biden is to make his first in-person appearance on a late-night talk show since taking office when he appears on ABC’s “Jimmy Kimmel Live!” UPCOMING: 250 words, photos by 11:30 p.m.

NATIONAL PARKS-PLASTICS — The Interior Department says it will phase out sales of plastic water bottles and other single-use products at national parks and on other public lands over the next decade, targeting a major source of U.S. pollution. SENT: 480 words, photos.

BRITAIN-POLITICS-CONSERVATIVE CONTENDERS — British Prime Minister Boris Johnson managed to narrowly win a no-confidence vote from his own Conservative Party, but the result dealt a heavy blow to his authority. Questions already are being asked about who might succeed him if he was forced from office. While there is no single front-runner, these are some possible contenders. SENT: 1,200 words, photos.

MEXICAN-CHURCH-LEADER-SEX-ABUSE — The leader of a Mexican megachurch faces more than 16 years in a California prison for sexually abusing three girls who were followers. Naasón Joaquín García is scheduled to be sentenced in Los Angeles Superior Court after pleading guilty to three felonies on the eve of a long-awaited trial. García is considered the “apostle” of Jesus Christ by 5 million worldwide followers of La Luz del Mundo church. He had vigorously fought the charges until he abruptly pleaded guilty last week. SENT: 525 words, photos.

BRAZIL-AMAZON-MISSING-EXPLAINER —A British journalist and an Indigenous affairs official are missing in the Amazon region’s Javari Valley. It’s Brazil’s second-largest Indigenous territory and sits in an isolated area where crime is rife and government oversight scant. That’s adding to fears for the two. The valley has seen violent conflicts between fisherman, poachers and government agents. SENT: 1,055 words, photos.

DEATH PENALTY-ARIZONA — An Arizona man convicted of murder in the 1984 killing of an 8-year-old girl was put to death in the state’s second execution since officials resumed carrying out the death penalty in May following a nearly eight-year hiatus. Frank Atwood, 66, died by lethal injection at the state prison in Florence for his murder conviction in the killing of Vicki Hoskinson. SENT: 630 words, photos.

XERNONA-CLAYTON — A key aide to the Rev. Martin Luther King Jr. says she’s deeply saddened by the hate crimes that are terrorizing people across America. Xernona Clayton has been working for racial equality and harmony since the civil rights movement began, which is why she tells The Associated Press that she can’t sit quietly in the face of racial terror. SENT: 1,000 words, photos.

SOUTHWEST-HEAT — Scorching temperatures are in store for the southwestern U.S. over the next several days, with cities like Phoenix, Las Vegas and Palm Springs in California expected to top 110 degrees. Parts of New Mexico and Texas also will see triple-digits. SENT: 495 words.

FINANCIAL MARKETS — Stocks were lower on Wall Street and trading remained choppy as investors try to determine how rising interest rates and inflation will impact the economy. SENT: 530 words, photo.

MUSIC-TAYLOR-HAWKINS-TRIBUTE — Foo Fighters will honor the rock band’s late drummer Taylor Hawkins with a pair of tribute concerts in September — one in London and the other in Los Angeles. SENT: 250 words, photos.

BKN-NBA-FINALS — The Warriors dialed up their defensive intensity in Game 2 and got another big scoring night from Stephen Curry to tie the series at 1. It now shifts to Boston for Game 3. The Celtics are just 5-4 at home this postseason, but haven’t lost two straight games since the end of March. UPCOMING: 750 words, photos. Game starts at 9 p.m.