VIRUS-OUTBREAK-CHRISTMAS —Christmas arrived around the world Saturday amid a surge in COVID-19 infections that kept many families apart, overwhelmed hospitals and curbed religious observances as the pandemic was poised to stretch into a third year. Yet, there were homilies of hope, as vaccines and other treatments become more available.. SENT: 1,000 words, photos WITH: AIRLINES-CHRISTMAS-CANCELLATIONS — Airlines canceled hundreds of flights Saturday as staffing issues tied to COVID-19 disrupted holiday celebrations during one of the busiest travel times of the year. SENT: 259 words, photos, video. 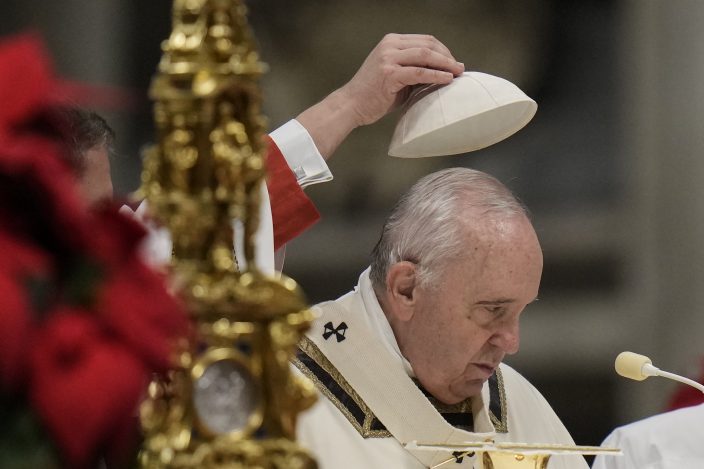 An aide removes Pope Francis' skull cap during Christmas Eve Mass, at St. Peter's Basilica, at the Vatican, Friday Dec. 24, 2021. Pope Francis is celebrating Christmas Eve Mass before an estimated 1,500 people in St. Peter's Basilica. He's going ahead with the service despite the resurgence in COVID-19 cases that has prompted a new vaccine mandate for Vatican employees. (AP PhotoAlessandra Tarantino)

SCI-NASA-SPACE-TELESCOPE — The world’s largest and most powerful space telescope has blasted off on a high-stakes quest to behold light from the first stars and galaxies. NASA’s James Webb Space Telescope rocketed away Saturday from French Guiana in South America. A European Ariane rocket provided the Christmas morning lift. SENT: 795 words, photos

REL-VIRUS-OUTBREAK-VATICAN-CHRISTMAS — Pope Francis has used his Christmas Day address to pray for an end to the coronavirus pandemic. Amid a record-setting rise in COVID-19 cases in Italy this week, only a few thousand people flocked to a rain-soaked St. Peter’s Square for Francis’ annual “Urbi et Orbi” (“To the city and the world”) Christmas address on Saturday. SENT: 552 words, photos

BRITAIN-QUEEN — Queen Elizabeth II in her Christmas Day message has shared the pain she felt after the death of her husband as she encouraged people everywhere to celebrate with friends and family despite the grief caused by the coronavirus pandemic now. The queen said in remarks broadcast Saturday that she understood the difficulty of spending the holiday season “with one familiar laugh missing.” SENT: 601 words, photos. WITH: BRITAIN-WINDSOR INTRUDER — SENT: 132 words, photos.

MYANMAR — A witness and reports from Myanmar say government troops rounded up villagers, some believed to be women and children, fatally shot more than 30 and set the bodies on fire. The purported photos of the aftermath of the Christmas Eve massacre in eastern Mo So village, just outside Hpruso township where refugees were sheltering from an army offensive, spread on social media in the country, fueling outrage against the military that took power in February. SENT: 640 words, photos.

FRANCE-CHRISTMAS-IN-THE-ICU — The staff is tired, the omicron variant is bearing down and the intensive care unit beds are filling fast at a hospital in the French city of Marseille. The unit’s chief doctor is trying to keep his team members motivated as they spend another Christmas tending to patients on breathing machines. SENT: 581 words, photo 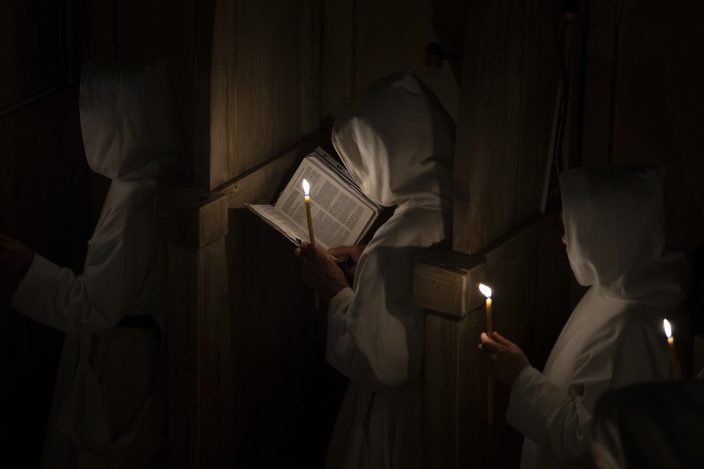 CONGO EXPLOSION — A bomb has exploded at a restaurant as patrons gathered on Christmas Day in an eastern Congolese town where Islamic extremists are known to be active. SENT: 250 words, developing.

SOUTH KOREA-BTW INFECTED — Three members of the K-pop superstar group BTS have been infected with the coronavirus after returning from abroad. The group’s management agency says RM and Jin were diagnosed with COVID-19 on Saturday evening, and another member, Suga, tested positive on Friday. SENT: 343 words, photos

ODD-BROTHERS-REGIFTING-TRADITION — Two New Hampshire brothers have gotten their holiday regifting skills down to an art by passing the same hard candy back and forth since 1987. It started when Ryan Wasson gave a 10-roll Frankford “Santa’s Candy Book” with assorted fruit flavors to his brother, Eric Wasson, as a joke for Christmas. He knew Eric wouldn’t like it. Eric gave it back the following Christmas. SENT: 235 words, photos.

SPAIN-VOLCANO — Authorities on one of Spain’s Canary Islands have declared an official end to a volcanic eruption that started in September. The director of the Canaries’ volcanic emergency committee announced the eruption on La Palma officially finished on Saturday following 10 days of no lava flows, seismic activity or significant sulfur dioxide emissions. SENT: 307 words, photos

BRITAIN-DUCHESS OF CAMBRIDGE — Scottish singer Tom Walker has praised the piano skills of the Duchess of Cambridge after the pair recorded a Christmas tune that was shown during a carol concert. The 30-year-old Walker performed new song “For Those Who Can’t Be Here. He was accompanied by 39-year-old Kate playing the piano in a prerecorded segment shown during the concert broadcast on ITV on Friday. SENT: 275 words, photos

VIRUS-OUTBREAK-BRITAIN — Thousands of people across England are spending a few minutes of Christmas Day to line up under leaden winter skies to be vaccinated against COVID-19 as the omicron variant fuels a surge in infections across the country. The Good Health Pharmacy in north London is one of dozens of vaccination sites that kept their doors open Saturday to administer “jingle jabs” amid a government push to offer booster shots to all adults by the end of the year. SENT: 382 words, photos

VIRUS OUTBREAK-BIDEN-HOME-TESTS — President Joe Biden says the federal government will buy half a billion COVID-19 rapid test kits and distribute them free of charge to people to use at home. But it will be a few more weeks before any tests go into the mail. SENT: 526 words, photo

VIRUS-OUTBREAK-VACCINE-WEST-VIRGINIA — As the coronavirus pandemic prepares to enter another calendar year, the fatigue on the front lines of the health care industry wears on. In West Virginia, nurse Chania Batten says her job is at times overwhelming administering COVID-19 vaccines at the drive-thru clinic at the only hospital in rural Roane County. SENT: 894 words, photos

WEST-COAST-WEATHER — Parts of California are getting a White Christmas after all, with snowfall pounding mountains across the state. SENT: 428 words

BIDEN -- President Joe Biden and his wife, Jill, are making calls to military service members stationed around the world to wish them a merry Christmas, marking his first holiday in the White House with the presidential tradition. By Alexandra Jaffe. SENT: 440 words, photos.

WHITE-HOUSE-HOLIDAY-ENTERTAINING — The holiday scene at the White House has been a little less merry under under COVID-19′s shadow. President Joe Biden and first lady Jill Biden replaced the large parties and overflowing buffet tables of the past with food-free open houses, face masks and testing for the unvaccinated. SENT: 937 words

RUSSIA-SOVIET COLLAPSE ANNIVERSARY — People strolling across Moscow’s snowy Red Square on the evening of Dec. 25, 1991 witnessed one of the 20th century’s most pivotal moments. That night, the Soviet red flag that flew over the Kremlin was pulled down and replaced with the Russian Federation’s tricolor. SENT: 1005 words, photos. WITH: AP-EU-Russia-Chronicling-Soviet-Breakup.

EL SALVADOR-ABORTION — Abortion rights groups say President Nayib Bukele’s government has freed three Salvadoran women who were sentenced to 30 years in prison under the nation’s strict anti-abortion laws after suffering obstetric emergencies. Morena Herrera of the Citizen’s Group for the Depenalization of Abortion said late Friday that the group was told one woman would be set free. SENT: 308 words, photo

RUSSIA-CRACKDOWN — A Russian organization that tracks political arrests and provides legal aid to detainees says government regulators have blocked its website. OVD-Info said in a tweet on Saturday that it wasn’t formally notified about the action by Russia’s internet and communications watchdog, Roskomnadzor. The group says it doesn’t know the reason the reason for the decision beyond that it was ordered by a court outside Moscow on Monday. SENT: 759 words, photo

SUDAN — Sudanese protesters have again taken to the streets in the capital Khartoum and elsewhere across the country to denounce the October military coup and subsequent deal that reinstated the prime minister but sidelined the pro-democracy movement. Authorities have tightened security across the capital, deploying troops and closing almost all bridges over the Nile River linking Khartoum with its twin city of Omdurman and the Bahri district. SENT: 486 words, photos

BKN-CHRISTMAS-DAY — The NBA’s five-game Christmas Day slate will be played as scheduled, but with many big names absent. Kevin Durant, Luka Doncic and Trae Young all were in the NBA’s health and safety protocols in the days leading up to the league’s holiday showcase. More than 100 players have gone into protocols amid a surge of the omicron variant of the coronavirus. SENT: 912 words, photos

FBN--BROWNS-PACKERS— The NFC North champion Green Bay Packers try to move a step closer to the conference’s No. 1 seed when they host the Cleveland Browns, who are trying to work their way back into playoff contention. By Steve Megargee. UPCOMING: 700 words, photos. Game starts 4:30 p.m.

FBN--COLTS-CARDINALS — The slumping Arizona Cardinals get a third chance to clinch a playoff spot when they host the Indianapolis Colts. The Colts have won five of their last six games and are currently No. 5 in the AFC playoff hunt. By David Brandt. UPCOMING: 750 words, photos. Game starts 8:15 p.m.