Christmas is just around the corner and Paul Verhoeven has left a present for us during this hallowed season: A film with lesbian nuns, full-frontal nudity, tons of sex, Catholic hypocrisy and brutal self-flagellation. Happy birthday, Jesus!

“Benedetta” doesn't know if it's a searing indictment of religion, a horror flick, a thriller or an adult film. In the end, it doesn't matter. It hopes to shock us with things like a Virgin Mary wooden figurine repurposed into a sex toy, but, largely it just bores. 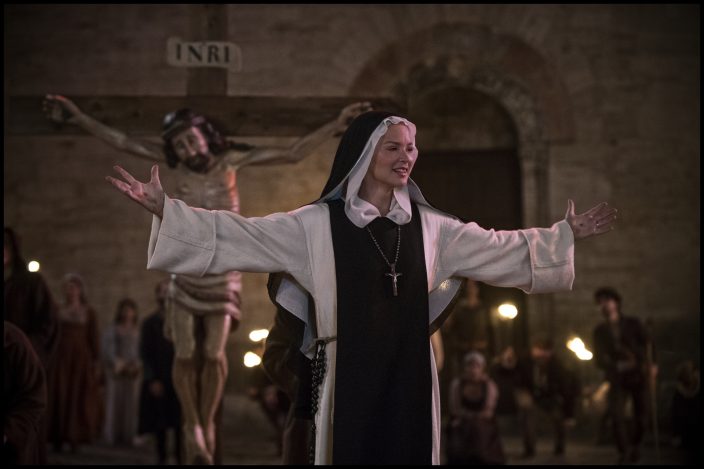 This image released by IFC Films shows Virginie Efira in a scene from "Benedetta." (IFC Films via AP)

In one vision, she sees Jesus nailed on the cross, a crown of thorns around his temple, bleeding from stab wounds. “Take off your clothes,” he asks her. If you don't know whether or not to laugh, you're not alone. This is like “Showgirls” in a convent.

Her character begins an illicit affair with a fellow nun (played ferociously by Daphne Patakia) and then develops the signs of stigmata while sleeping. Is she really being visited by God or is she making it up with some careful self-cutting? 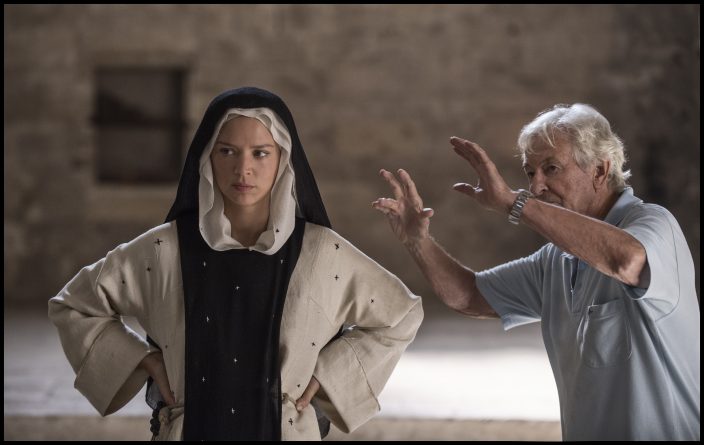 This image released by IFC Films shows Virginie Efira, left, with director Paul Verhoeven on the set of "Benedetta." (IFC Films via AP)

The convent's head — played by Charlotte Rampling who gives this film more gravitas than it deserves — is suspicious. “No miracle occurs in bed, believe me,” she says in one of the best lines. But the local church head sees in this apparently blessed nun an opportunity to rise up the chain of command and make Pescia a magnet for pilgrims — like Assisi.

One brave nun refuses to go along with the lie. “People have to know. What’s going on here is blasphemy,” she says. The convent head replies: “Everyone who matters already knows.”

But as the cynics around her mount, Benedetta needs to make bigger and bigger stunts to prove she is chosen. She claims that Jesus told her that as long as she lives, everyone else will live. How convenient. 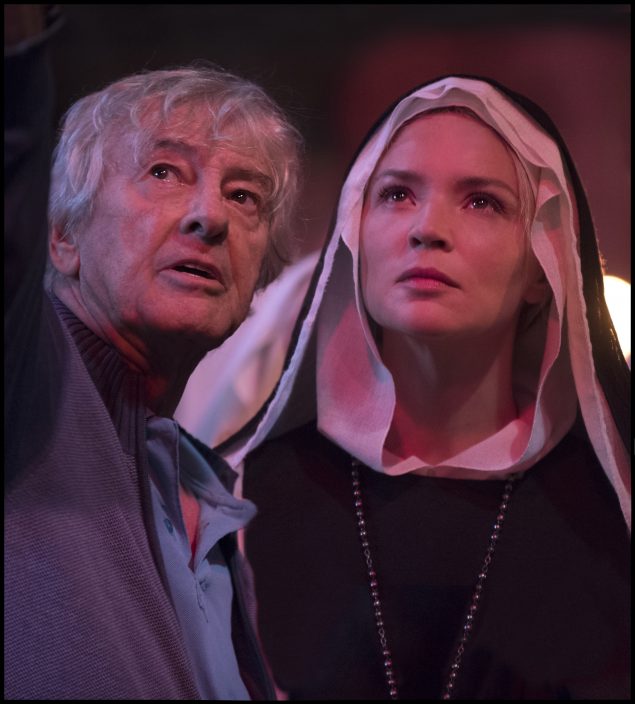 This image released by IFC Films shows director Paul Verhoeven, left, and Virginie Efira on the set of "Benedetta." (IFC Films via AP)

Verhoeven — who directs and cowrote the script with David Birke — is not interested in the truth of this nun. When Benedetta is asked privately by her lover if she faked the stigmata, she answers: “I don’t know. I don’t know how God makes things happen.” Truth is not important here, only the appearance of truth. (Never ask about naked truth here.)

It's all so over-the-top that it skirts the border of comedy. Verhoeven has never been very subtle with his targets — say, American hegemony with “Starship Troopers” and the authoritarian state with “RoboCop.” Here, he's as incisive as a dull bread knife.

The exploitative “Benedetta” seems to want to poke at religious hypocrisy but it actually reveals the filmmaker's: How does it help his mission exposing a corrupt system to show a horrific torture scene with a stripped-naked nun?

There is perhaps an intriguing movie here somewhere — “Who decides what is God’s will?” is one lingering question —but to find it you have to slice away all the bawdy and ultra-violent excesses that are clearly intended to push buttons, like a 5-year-old testing her parents’ patience. Yawn.

Plus, it takes a particular kind of chutzpah in 2021 for an elderly man to make a movie purporting to champion female liberation in a rigid male hierarchy by showing exclusive female nudity and same-sex dry humping. The only blessing here is when it's over.

“Benedetta,” an IFC Films release, is rated R for “nudity, sex scenes, suicide and language.” Running time: 126 minutes. No stars out of four.