Kayla Harrison posted a photo on Instagram in April of her bloody Allen Iverson-esque stepover of a defeated opponent from last year. Both MMA fighters and the canvas splashed in crimson, Harrison disposed of another victim on her march toward an undefeated record.

The photo epitomized was Harrison was born to do — prove she’s a champion at the highest level, from the Olympics to the cage, leaving only destruction in her wake.

Her next photo three days later is of two small children, laughing, mugging for the camera, and, with each day, giving Harrison all the peace she’s ever wanted in her 30 years. 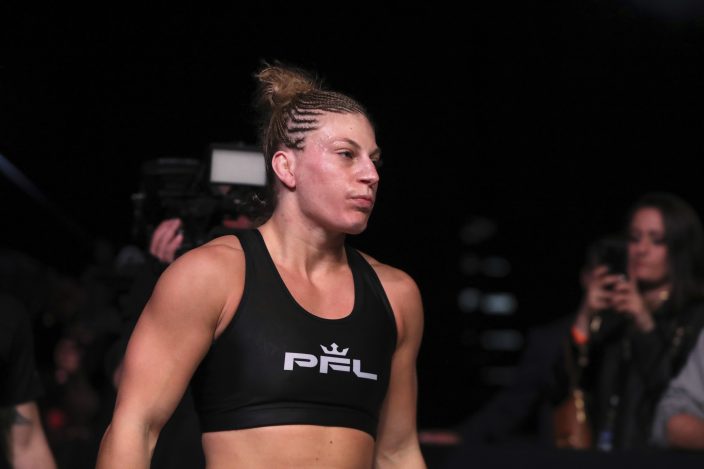 FILE - Kayla Harrison walks to the cage for her Professional Fighters League bout against Larissa Pacheco at Nassau Coliseum in Uniondale, N.Y., in this Thursday, May 9, 2019, file photo. Harrison's new bio reads, Olympic gold medalist, MMA champ, single mom. When tragedy struck her family, Harrison suddenly had to balance unexpected single motherhood with a blossoming career as an undefeated fighter for the PFL. Harrison is scheduled to fight against Cindy Dandois on Friday, June 25 in Atlantic City, N.J. (AP PhotoGregory Payan, File)

“I’m trying to be the baddest women on the planet,” Harrison said, “but now I’m changing 15 diapers a day.”

Harrison was a two-time judo Olympic gold medalist and won the Professional Fighter’s League's $1 million prize when she finished 2019 as the league’s lightweight champion.

She was cool in Florida, where a tumultuous life had settled down and the only thing on her plate was the next bout. Like in the fight game, one blow can change everything. Tragedy struck in late 2019 when her mother had a stroke, and her stepfather died months later, leaving Harrison’s young niece and nephew without a guardian (her sister was out of the picture). The PFL, where Harrison had emerged as the face of the upstart promotion, shut down in 2020 because of the pandemic and suddenly Harrison went from rage in the cage to story time in the nursery.

“I didn’t know how empty my life was, I guess, before I had the kids,” she said. “I would wake up, I would train, I would eat, I would sleep, I would train, repeat. I would go to taco Tuesdays with my friends. I didn’t really have a purpose outside of fighting. It’s a very selfish thing that I do, to wake up and try and beat someone for a lot of money. Having the kids has given me a new sense of purpose.”

Harrison (9-0) has her next purpose Friday when she fights Cindy Dandois (16-6) in a 155-pound bout in Atlantic City, New Jersey, on the PFL’s final card before the playoffs. The PFL moves to Florida for the next round of the postseason and Harrison expects to be out of the league’s competitive bubble and closer to another $1 million payout.

She took the kids with her in the PFL bubble for her May fight but left them behind for this one — Harrison is not truly ready for the kids to watch her beat the hell out of another person — but soon it’s back to real life where she’s still learning motherhood on the fly. It’s gymnastics for 8-year-old Kyla and outside play time with 2-year-old Emery (when she’s not telling him to cool it on the ground-and-pound on his stuffed animals) and keeping the kids on a healthy schedule even when she’s training at the gym.

“I was fighting a different battle, I guess,” she said. “I became a mom overnight and that is no easy thing.”

No U.S. judoka — man or woman — had ever won an Olympic gold medal before Harrison beat Britain’s Gemma Gibbons to win the women’s 78-kilogram-and-under division at the 2012 Olympics in London. She won gold again four years later at the Rio de Janeiro Games and made her MMA debut in 2018. She’s finished five opponents in the first round and only once went more than three rounds. After butting heads over the contract, she was allowed to fight outside the PFL banner last year and won again in a bout for Invicta Fighting Championships.

Had it not been for that fight, Harrison would have spent a year outside the cage.

“I tried to keep it in perspective that I was a millionaire with money in the bank and a roof over my head and food in my belly,” she said. “But being in the prime of my career and being told to sit on the shelf for a year is tough. I’ve been competing my whole life. I’ve been fighting my whole life, in one way or another.”

She could be facing the final fights of her PFL career. Her contract is up at the end of the year and the allure of moving on to stiffer competition in Bellator, One Championship or even UFC certainly tugs at her competitive spirit (and pocketbook). UFC President Dana White said earlier this year, “ when she is (ready), we’re ready.”

PFL CEO Peter Murray would like to keep his top attraction and suggested a pay-per-view fight with Claressa Shields — like Harrison, a two-time Olympic gold medalist (in boxing) — could be on the horizon. Shields, though, only made her MMA debut two weeks ago and Harrison said she sees herself more as a mentor for the PFL newbie than an adversary.

“After watching the fight, probably those ideas of us fighting any time soon should be put to bed,” Harrison said.

Bedtime. It’s become Harrison’s favorite part of the day, when she tucks in the kids and reads them one of their favorite books, “Zen Pig.”

“At the end it always says, ‘I am abundant and happy, I have all that I need,’” she said.

The kids then put their hands together and say “namaste.”