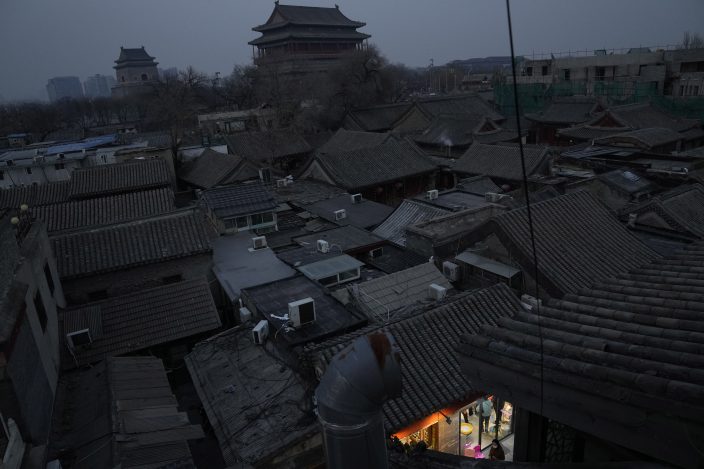 VIRUS OUTBREAK-NEW VARIANT-GLOBAL — The U.K. tightened up rules on mask-wearing and on testing of international arrivals after finding two cases of the new potentially more contagious omicron variant of the coronavirus that was identified just a few days ago in South Africa. Amid fears that the new variant has the potential to be more resistant to the protection offered by vaccines, there are growing concerns around the world that the pandemic and associated lockdown restrictions will persist for far longer than hoped. By Pan Pylas. SENT: 920 words, photos, video. With: VIRUS-OUTBREAK-SOUTH-AFRICA-NEW-VARIANT — In the space of two weeks, South Africa has gone from a period of low COVID-19 transmission to rapid growth of new confirmed cases. The country’s numbers are still relatively low — 2,828 new confirmed cases Friday - but omicron’s speed in infecting young South Africans has alarmed health professionals. By Andrew Meldrum. SENT: 680 words, photos. With: EU-MED-SOUTH-AFRICA-VARIANT-EXPLAINER — What is this new COVID variant in South Africa? SENT: 900 words, photos.

VIRUS OUTBREAK-BIDEN-BLAMING COVID — The White House sees COVID-19 as the root cause of both the nation’s malaise and President Joe Biden’s political woes, and that getting the pandemic under control is the key to reviving the country and Biden’s standing. If that wasn’t enough of a challenge, there’s a new variant to worry about, too. By Zeke Miller. SENT: 1,220 words, photos.

U.S. HOLIDAY SHIPPING — The Postal Service and private shippers UPS and FedEx are bolstering their hiring by bringing in about 230,000 seasonal workers to ensure they don’t become overwhelmed by packages again like they were in the 2020 holiday season. But low product inventories and port and supply chain disruptions are creating new uncertainty about getting gifts delivered on time. Despite that, U.S. Postmaster General Louis DeJoy said this month: “We are ready.” By David Sharp. SENT: 600 words, photos, video.

IMMIGRATION-LANGUAGE-STATES — California and Colorado this year banned state agencies from using “alien” to refer to undocumented immigrants, with supporters of the change saying the word is demeaning and dehumanizing. The Biden administration took a similar step for federal agencies. Yet it remains in wide use in many states. By Acacia Coronado. SENT: 1,080 words, photos.

REPUBLICANS-CHRISTIE — As he stakes out his own lane for a possible second presidential run in 2024, former New Jersey Gov. Chris Christie is painting himself as a Donald Trump loyalist who largely agrees with the former president’s policies but is fully aware of Trump’s flaws and is willing to call him out on them. By Jill Colvin. SENT: 1,130 words, photos.

TRIPLE MURDER-WRONGFUL CONVICTION — Nearly $1.4 million was raised for a man who spent 43 years behind bars before a judge overturned his conviction in a triple killing. SENT: 170 words, photos, video.

NETHERLANDS-TRANSGENDER APOLOGY — The Dutch government apologized for a now discredited and scrapped law that required transgender people to undergo surgery and sterilization if they wanted to change their gender on their birth certificate. SENT: 290 words.

ORGANIZED-RETAIL-THEFT-CALIFORNIA — A security guard has died after he was shot while he protected a San Francisco Bay Area television news crew covering a smash-and-grab theft, part of a rash of organized retail crime in the region. SENT: 315 words.

VIRUS-OUTBREAK-GERMANY — Germany’s health minister said he hopes that the sight of air force planes transferring patients across the country will act as a “wake-up call” to millions who are still holding out on getting vaccinated against COVID-19. SENT: 300 words.

VIRUS-OUTBREAK-CZECH-REPUBLIC-PRESIDENT — Czech President Miloš Zeman was discharged from the capital’s military hospital after testing positive for the coronavirus. The 77-year-old Zeman had already been discharged following more than a month’s treatment for an unspecified illness on Thursday, but was readmitted only hours later after testing positive for the coronavirus. Zeman has no symptoms of COVID-19, the hospital said. SENT: 280 words.

VIRUS-OUTBREAK-FRANCE-GUADELOUPE — France’s government is offering to discuss some autonomy for the French Caribbean island of Guadeloupe, which has been wracked by virus-related rioting and strikes that reflect long-running frustrations over inequality with the French mainland. SENT: 590 words, photos.

BIDEN-IMMIGRATION — During the 2020 campaign, Democrats used on demands to fix the immigration system as a cudgel against Republicans. But almost a year into Joe Biden’s presidency, there’s growing consternation that his administration can’t find the right balance on the contentious issue. SENT: 1,210 words, photos.

OJIBWE-ANIMAL-WELFARE — Several members of the Leech Lake Band of Ojibwe in northern Minnesota are working to address animal neglect on their tribal lands — and in doing so bringing their community closer to its spiritual roots. The yearslong and increasingly organized push by community members to improve animal welfare is deeply rooted in cultural and spiritual values regarding the Ojibwe people’s relationship with all living creatures. SENT: 1,000 words, photos.

EUROPE-SMUGGLING NETWORKS — Migrant-smuggling networks organizing English Channel crossings have reaped tens of millions of euros this year, which is the busiest and deadliest ever recorded. SENT: 1,070 words, photos.

RUSSIA-COAL-MINE — A Russian court ordered five people to remain in pre-trial detention for two months pending an investigation into a devastating blast in a coal mine in Siberia that resulted in dozens of deaths. Russian authorities reported 51 deaths after a methane explosion rocked the Listvyazhnaya mine in the Kemerovo region in southwestern Siberia on Thursday — 46 miners and five rescuers. The tragedy appears to be the deadliest in Russia since 2010. SENT: 460 words.

BRITAIN-STORM — At least two people have died in the U.K. after the year’s first winter storm battered parts of the countries with gusts of nearly 100 mph (160 kph). SENT: 170 words, photos.

SYRIA-DISPLACED-PHOTO-GALLERY — In the opposition-held town of Sarmada near the border with Turkey, thousands of displaced Syrians go about their daily lives with little hope of returning to their homes any time soon. SENT: 200 words, photos.

EUROPE-WORKING FROM HOME — Portugal’s new law on working from home decrees companies can’t attempt to contact their staff outside working hours and must help pay for electricity and internet. But critics say the new rules are half-baked, short on detail and unfeasible. SENT: 970 words, photos.

AFGHANISTAN — Afghanistan’s Taliban prime minister defended the group’s rule in a public address, saying it was not to blame for a worsening economic crisis and is working to repair the corruption of the ousted government. He also dismissed international pressure for the formation of a more inclusive Cabinet. SENT: 450 words.

JAPAN-DEFENSE — Japanese Prime Minister Fumio Kishida, at his first troop review, renewed his pledge to consider “all options,” including acquiring enemy base strike capability, and vowed to create a stronger Self-Defense Force to protect the country amid growing threats from China and North Korea. SENT: 480 words, photos.

MIGRATION-AUSTRIA-ARRESTS — Austrian authorities said they have arrested 15 people suspected of smuggling Syrian, Lebanese and Egyptian migrants into the country, and seized 14 vehicles that were used to transport them. SENT: 215 words.

CHINA-GAMBLING-SYNDICATE — Macao police detained the head of Macao’s biggest casino junket organizer and others after Chinese authorities issued an arrest warrant for them over accusations that they ran an illegal cross-border gambling syndicate. SENT: 290 words, photo.

ART-BOB DYLAN — Bob Dylan has been telling stories through songs for 60 years. But recently America’s master lyricist has also captured moments in a new series of paintings that, just like his songs, are intimate and a bit of a mystery. The most comprehensive exhibition of the Nobel laureate’s visual art to be held in the U.S. goes on display on Tuesday in Miami at the Patricia & Phillip Frost Art Museum. SENT: 850 words, photos.

FBC--T25-OHIO STATE-MICHIGAN — No. 2 Ohio State plays No. 6 Michigan at Michigan Stadium with high stakes. The winner advances to the Big Ten championship game with a path to the College Football Playoff. UPCOMING: 700 words, photos. Game started at noon.

FBC--T25-AP TOP 25 TAKEAWAYS — Win and you’re in. That’s the theme around college football as teams jockey for positions in conference championships in high stakes rivalry games from Boston to Ann Arbor, Michigan, to Stillwater, Oklahoma. UPCOMING: 900 words, photos by 9 p.m.