A commercial tanker that sank off the Tunisian coast and and was believed to be holding 750 tons of diesel fuel in fact held no fuel at all, according to Tunisian naval officials. The ship's crew has been detained on suspicion of criminal activity.

The sinking of the Xelo ship last week raised fears of a potential fuel spill in the Mediterranean. Tunisia's Environment Ministry activated an emergency response plan and neighboring Italy sent a barge with pollution-clearing equipment to the area.

The ship's captain initially said it contained 750 tons of fuel. But after Tunisian and Italian divers inspected the sunken ship, they found no fuel in its containers, Rear Adm. Mezri Latif told a news conference Friday. 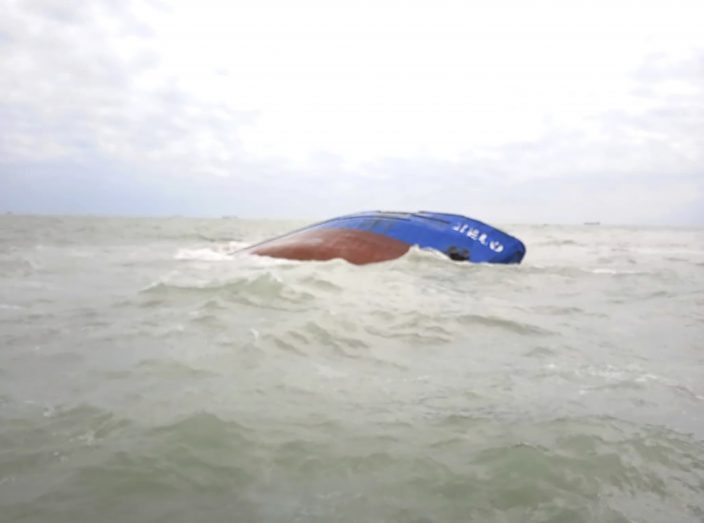 A view of the merchant ship Xelo which sank in Tunisian territorial waters, in the Gulf of Gabès, off the south-eastern coast of Tunisia. Saturday April 16, 2022. A commercial oil tanker carrying more than 750 tons of diesel ran aground overnight from Friday to Saturday in the Gulf of Gabès in southeastern Tunisia. According to the Environment Ministry, the ship sank late Saturday morning due to water seeping into the engine room. (AP Photo via Tunisian Ministry of Defence)

“There was only sea water inside the ship … The ship’s valves and pumps were corroded. We deduced that the ship had not been carrying oil for a certain period,” he said.

“The ship no longer represents an ecological danger for the Gulf of Gabes. There is no fuel leak. The Navy will oversee the wreckage extraction operation and the investigation will continue to determine the exact causes of the sinking,” the Tunisian officer said.

He said the ship's bridge had been vandalized and several navigation devices had been ripped off. The GPS was destroyed with hammer blows, and the ship's bill of lading disappeared.

The seven-member crew was rescued by the Tunisian Navy after having launched a distress signal on April 16 due to bad weather conditions.

They were all detained Friday on charges of association with criminal activity, according to Mohamed Karay, spokesman for the court in the city of Gabes.

The boat was registered in Equatorial Guinea, and its crew members are from Georgia, Turkey and Azerbaijan.

The Xelo had left the port of Damietta in Egypt heading for Malta, but was diverted from its route due to bad weather conditions.