When abuses were reported in recent weeks in Mali — fake graves designed to discredit French forces; a massacre of some 300 people, mostly civilians — all evidence pointed to the shadowy mercenaries of Russia's Wagner Group.

Even before these feared professional soldiers joined the assault on Ukraine, Russia had deployed them to under-the-radar military operations across at least half a dozen African countries. Their aim: to further President Vladimir Putin's global ambitions, and to undermine democracy.

The Wagner Group passes itself off as a private military contractor and the Kremlin denies any connection to it or even, sometimes, that it exists. 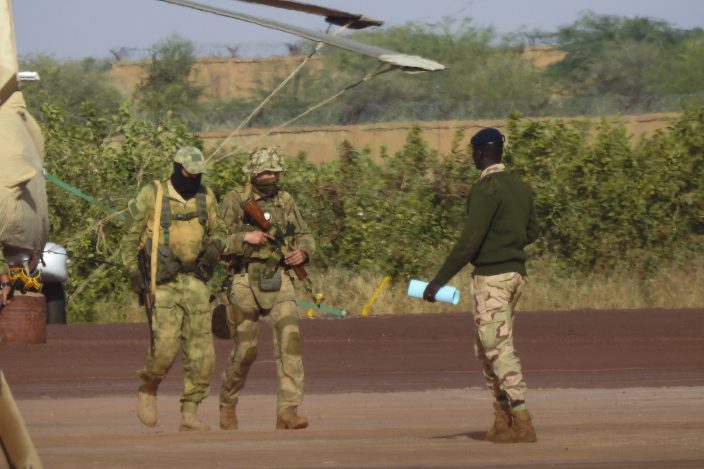 This undated photograph handed out by French military shows Russian mercenaries, in northern Mali. Russia has engaged in under-the-radar military operations in at least half a dozen countries in Africa in the last five years using a shadowy mercenary force analysts say is loyal to President Vladimir Putin. The analysts say the Wagner Group of mercenaries is also key to Putin's ambitions to re-impose Russian influence on a global scale. (French Army via AP)

But Wagner's commitment to Russian interests has become apparent in Ukraine, where its fighters, seen wearing the group's chilling white skull emblem, are among the Russian forces currently attacking eastern Ukraine.

In sub-Saharan Africa, Wagner has gained substantial footholds for Russia in Central African Republic, Sudan and Mali. Wagner's role in those countries goes way beyond the cover story of merely providing a security service, experts say.

"They essentially run the Central African Republic," and are a growing force in Mali, Gen. Stephen Townsend, the commander of U.S. armed forces in Africa, told a Senate hearing last month. 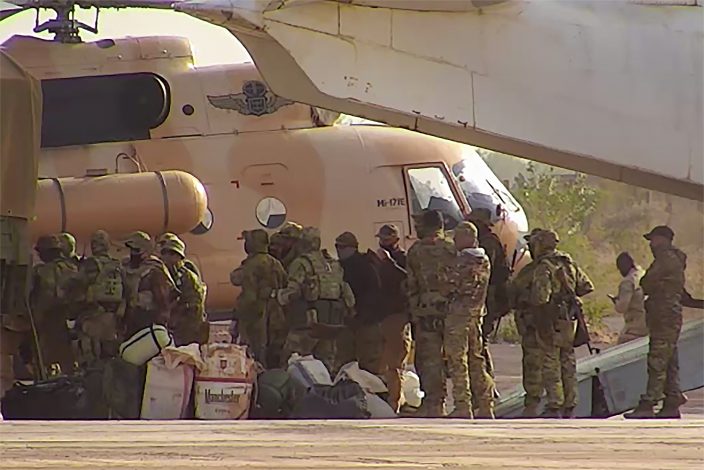 This undated photograph handed out by French military shows Russian mercenaries boarding a helicopter in northern Mali. Russia has engaged in under-the-radar military operations in at least half a dozen countries in Africa in the last five years using a shadowy mercenary force analysts say is loyal to President Vladimir Putin. The analysts say the Wagner Group of mercenaries is also key to Putin's ambitions to re-impose Russian influence on a global scale. (French Army via AP)

The United States identifies Wagner’s financer as Yevgeny Prigozhin, an oligarch who is close to the Russian president and sometimes is called “Putin’s chef" for his flashy restaurants favored by the Russian leader. He was charged by the U.S. government with trying to influence the 2016 U.S. presidential election, and the Wagner Group is the subject of U.S. and European Union sanctions.

Russia's game plan for Africa, where it has applied its influence as far north as Libya and as far south as Mozambique, is straightforward in some ways, say analysts. It seeks alliances with regimes or juntas shunned by the West or facing insurgencies and internal challenges to their rule.

The African leaders get recognition from the Kremlin and military muscle from Wagner. They pay for it by giving Russia prime access to their oil, gas, gold, diamonds and valuable minerals. 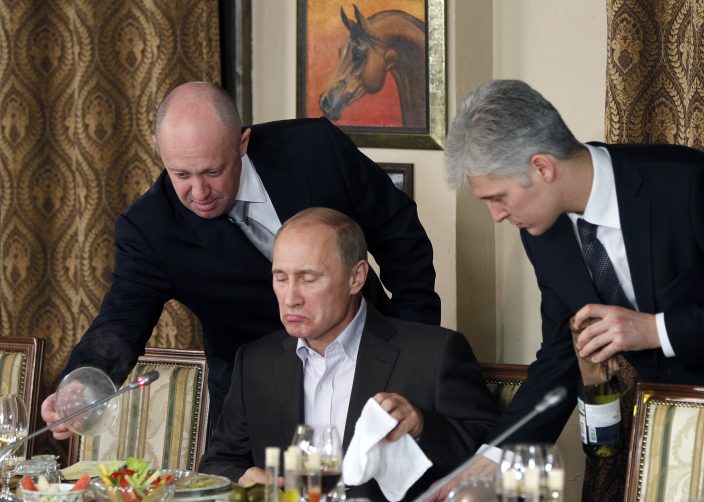 But there's another objective of Russia's “hybrid war” in Africa, said Joseph Siegle, director of research at the Africa Center for Strategic Studies. 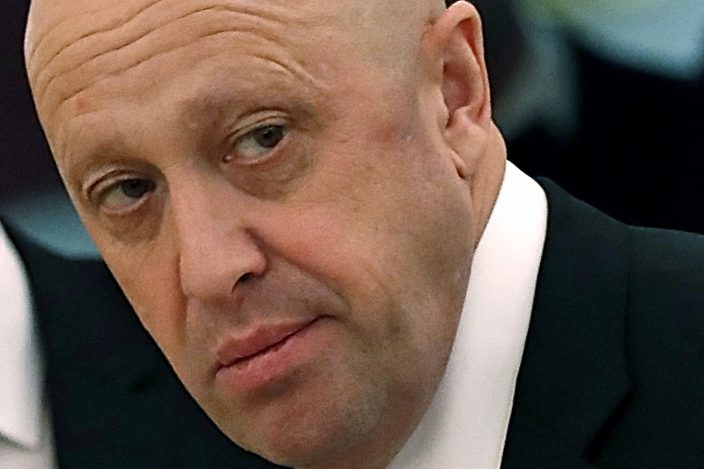 FILE - Russian businessman Yevgeny Prigozhin prior to a meeting of Russian President Vladimir Putin and Chinese President Xi Jinping in the Kremlin in Moscow, Russia, July 4, 2017. Russia has engaged in under-the-radar military operations in at least half a dozen countries in Africa in the last five years using a shadowy mercenary force, Wagner, analysts say is loyal to President Vladimir Putin. The United States identifies Prigozhin as Wagner's financer. (Sergei IlnitskyPool Photo via AP, File)

“If democracy is held up as the ultimate aspirational governance model, then that is constraining for Russia," Siegle said.

Rather, Wagner promotes Russian interests with soldiers and guns, but also through propaganda and disinformation, as Prigozhin has done for Putin before.

In Central African Republic, Wagner fighters ride around the capital Bangui in unmarked military vehicles and guard the country's gold and diamond mines. They have helped to hold off armed rebel groups and to keep President Faustin-Archange Touadera in power, but their reach goes much further. Russian national Valery Zakharov is Touadera's national security advisor but also a “key figure” in Wagner's command structure, according to European Union documents accusing the mercenary group of serious human rights violations. 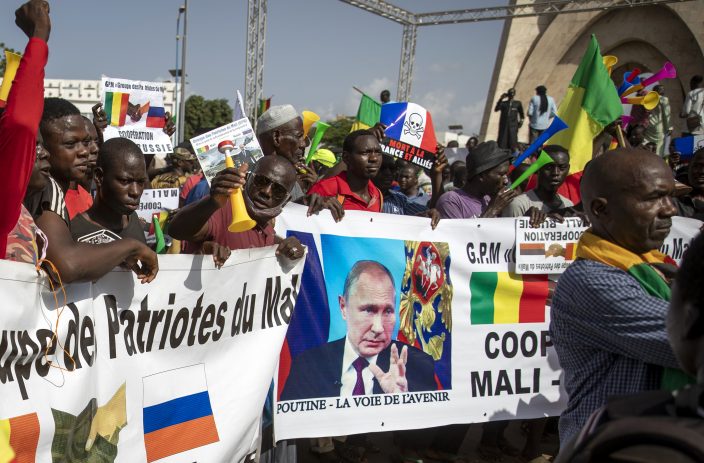 FILE - Malians demonstrate against France and in support of Russia on the 60th anniversary of the independence of the Republic of Mali in 1960, in Bamako, Mali, Sept. 22, 2020. The banner in French reads: "Putin, the road to the future". Russia has engaged in under-the-radar military operations in at least half a dozen countries in Africa in the last five years using a shadowy mercenary force, Wagner, analysts say is loyal to President Vladimir Putin. (AP PhotoFile)

A statue erected last year in Bangui depicts Russian soldiers standing side by side to protect a woman and her children. Russia is cast as the country's savior and pro-Russia marches have been held in support of the war in Ukraine and to criticize former security partner France — though several protesters said they are paid.

“A Central African adage says that when someone helps you, you have to reciprocate. This is why we have mobilized as one to support Russia,” said Didacien Kossimatchi, an official in Touadera's political party. “Russia has absolved us of the unacceptable domination of the West."

Kossimatchi said Russia was “acting in self-defense” in Ukraine.

Such support from African countries is a strategic success for Russia. When the United Nations voted on a resolution condemning the invasion of Ukraine, 17 of the 35 countries that abstained from the vote — nearly half — were African. Several other African nations did not register a vote.

“Africa is fast becoming crucial to Putin’s efforts to dilute the influence of the United States and its international alliances,” said a report in March by the Tony Blair Institute for Global Change, a non-profit set up by the former British prime minister.

Russia's strategy in Africa comes at a minimal cost economically and politically. Analysts estimate Wagner operates with only a few hundred to 2,000 mercenaries in a country. Many are ex-Russian military intelligence, Siegle said, but because it's a private force the Kremlin can deny responsibility for Wagner's actions.

The real price is paid by ordinary people.

France, the U.S. and human rights groups have accused Wagner mercenaries of extra-judicial killings of civilians in Central African Republic. A U.N. panel of experts said private military groups and "particularly the Wagner Group” have violently harassed people and committed rape and sexual violence. They are just the latest accusations of serious abuses by the group.

The Wagner group has responded with a charm offensive — creating films designed to please the public, sponsoring beauty pageants and distributing educational materials that promote Russia’s involvement in Africa. Russian is now being taught in universities.

Russia has taken its Central African Republic blueprint to Mali and elsewhere in Africa. In Mali, there has been an “uprooting of democracy,” said Aanu Adeoye, an analyst on Russia-Africa affairs at the London-based Chatham House think tank.

Following coups in 2020 and last year, France is withdrawing troops from its former colony that had been helping fight Islamic extremists since 2013. Wagner moved in, striking a security deal with Mali's new military junta, which then expelled the French ambassador and banned French TV stations. Tensions with the West have escalated. So has the violence.

Last month, Mali's army and foreign soldiers who witnesses suspected were Russian killed an estimated 300 men in the rural town of Moura. Some of those killed were suspected extremists but most were civilians, Human Rights Watch said, calling it a “deliberate slaughter of people in custody."

This week, when French forces handed over control of the Gossi military base, suspected Wagner agents hurriedly buried several bodies nearby and a Russian social media campaign blamed France for the graves. The French military, however, had used aerial surveillance after their withdrawal to show the creation of the sandy graves.

"They have no concerns about minor things like democracy and human rights,” said Chatham House's Adeoye.