Last-minute shoppers cleared grocery shelves and raided snowblower dealers Friday along the U.S. East Coast ahead of a storm expected to drop heavy, fast-falling snow on some of the nation's biggest metro areas, including Philadelphia, New York and Boston.

Officials from Virginia to Massachusetts rushed to declare snow emergencies, impose parking bans and restrict travel in advance of a system expected to drop wet snow at rates as high as 5 inches per hour. The storm threatened blizzard conditions and coastal flooding in some areas.

Merrick McCormack was among hundreds who packed a Shaw’s Supermarket in Warwick, Rhode Island, with the entire state under a blizzard warning and officials mobilizing more than 500 snowplows. 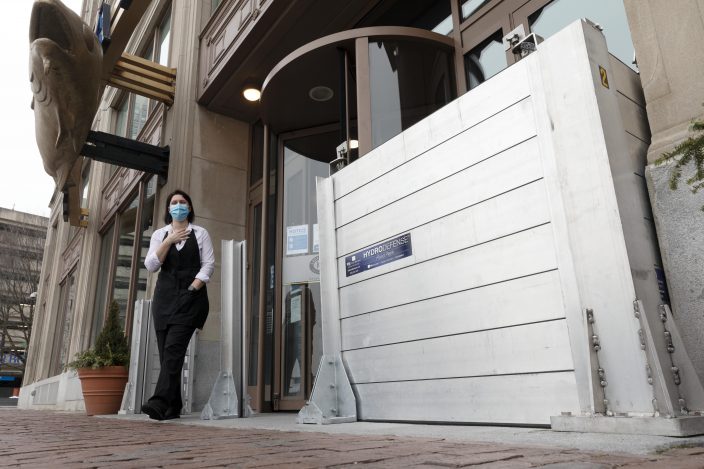 A waitress stands in front of a flood barrier at the entrance to Legal Seafoods restaurant, Friday, Jan. 28, 2022, on the waterfront in Boston. Residents and officials in the Northeast and mid-Atlantic regions of the U.S. are bracing for a powerful winter storm expected to produce blizzard conditions Friday and Saturday. (AP PhotoMichael Dwyer)

“I don’t fuss with storms. I know in a couple of days, we’re going to be free and clear. No need to panic,” the 51-year-old Cranston resident said, flashing some New England stoicism as he unloaded his groceries.

“We ask shoppers to buy what they need and save some for their neighbors,” the grocery chain said in a statement. 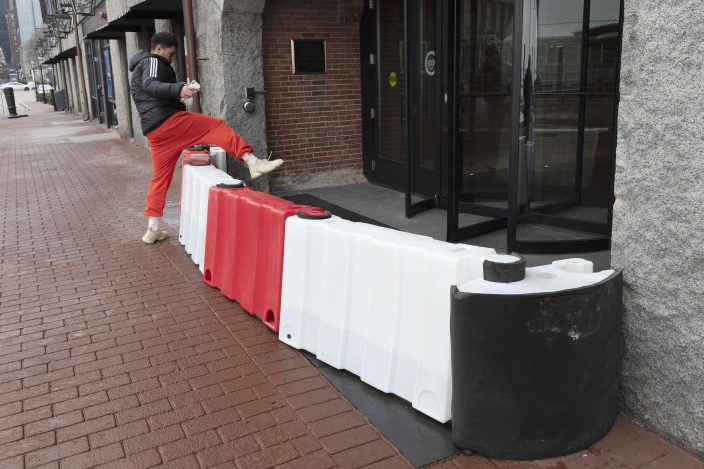 A man steps over a flood barrier at the entrance to a building on Long Wharf, Friday, Jan. 28, 2022, in Boston. Residents and officials in the Northeast and mid-Atlantic regions of the U.S. are bracing for a powerful winter storm expected to produce blizzard conditions Friday and Saturday. (AP PhotoMichael Dwyer)

By midday Friday, airlines had canceled more than 1,000 flights in the U.S. and had already scrubbed about 2,500 scheduled for Saturday, according to the tracking service FlightAware. The hardest-hit airports included those serving Chicago, New York City and Boston.

Amtrak canceled or limited weekend train service along its busy corridor from Washington to Boston.

The storm is forecast to begin in parts of the Carolinas and Appalachia on Friday evening, according to the National Weather Service. 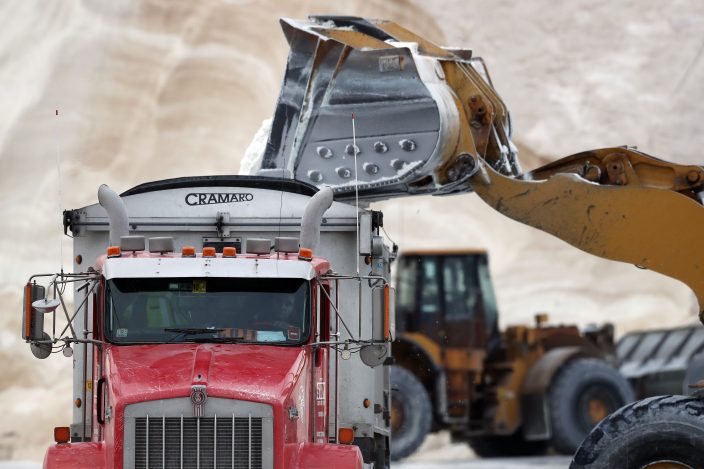 A front-end loader dumps road salt into a truck Friday, Jan. 28, 2022, in Chelsea, Mass. Residents and officials in the Northeast and mid-Atlantic regions of the U.S. are bracing for a powerful winter storm expected to produce blizzard conditions Friday and Saturday. (AP PhotoMichael Dwyer)

The system was expected to intensify as a nor’easter and bring the snow Saturday up into New England, where forecasters warned of up to 20 inches (51 centimeters) and wind gusts as high as 60 mph (96 kph). Some isolated spots could see nearly 3 feet (1 meter) of snow.

The common refrain from New York Gov. Kathy Hochul and other state executives: “Just stay off the roads.” 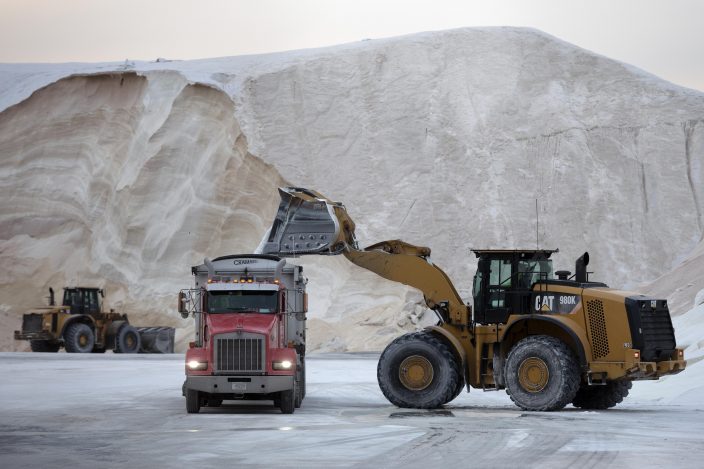 A front-end loader dumps road salt into a truck Friday, Jan. 28, 2022, in Chelsea, Mass. Residents and officials in the Northeast and mid-Atlantic regions of the U.S. are bracing for a powerful winter storm expected to produce blizzard conditions Friday and Saturday. (AP PhotoMichael Dwyer)

In Maryland, Gov. Larry Hogan mobilized the state National Guard, with parts of the state’s Eastern Shore expecting up to a foot of snow. Washington could see 1 to 3 inches of snow.

In Virginia, where a blizzard this month stranded hundreds of motorists for hours on Interstate 95, Gov. Glenn Youngkin said officials had already begun positioning resources in anticipation of toppled trees and power outages and possible tidal flooding.

Similar weather was expected up to the Philadelphia and New York City areas. Seaside communities from the Jersey Shore to suburban Long Island and southeastern Connecticut could see higher snowfall rates and stronger winds than the big cities. 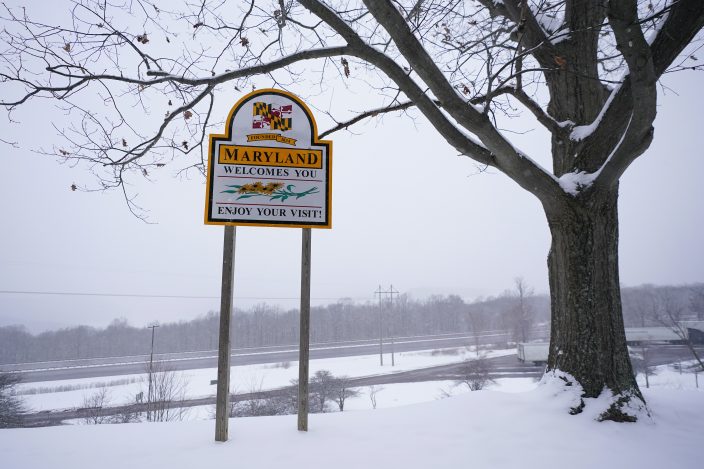 About 1,800 snowplows were ready for deployment in New York City, and workers were already spreading salt on hundreds of miles of streets ahead of the storm, Sanitation Commissioner Edward Grayson said.

Some New England officials fretted about a shortage of snowplow drivers.

Connecticut Transportation Commissioner Joseph Giulietti said Friday his staffing is down about 30% this weekend because of COVID-19 and other issues. 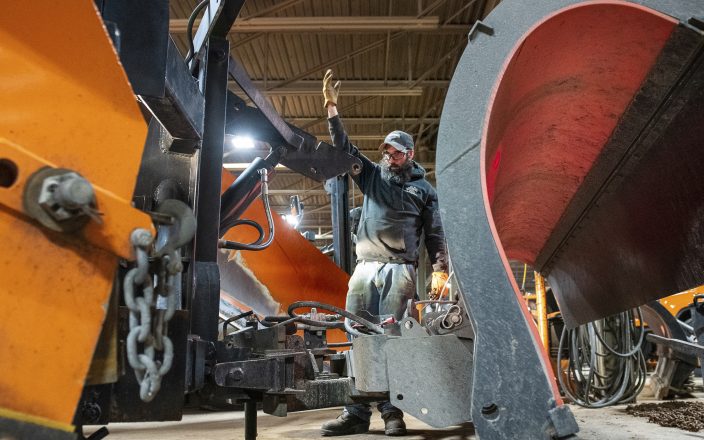 Auburn Public Works employee Andy Gagnon guides equipment operator Per Tripp as they attach the last blade to a truck in the Auburn, Maine, garage Friday morning, Jan. 28, 2021, as they prepare for the weekend storm. (Russ DillinghamSun Journal via AP)

The state expects to have more than 600 plow and sanding trucks out along with additional contractors, but with anticipated snowfall rates of 5 inches an hour, it might not be enough, he said.

“It depends on the length of the storm,” Giulietti said. “Because these people have to keep circling and going back out on the routes.”

Across the Northeast, the shelf-clearing rush for bread, eggs, milk and other staples was well underway Friday at grocery stores. 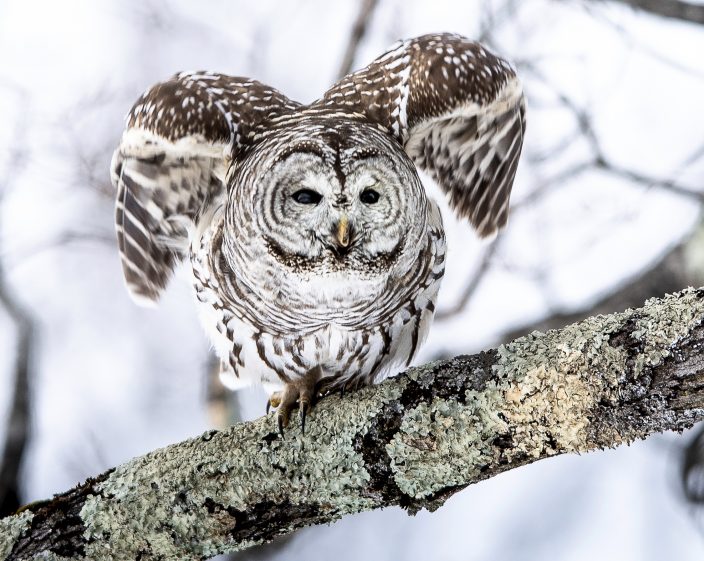 A barred owl with a broken beak takes flight from a branch along Line Road in Greene, Maine, Friday, Jan. 28, 2022. According to Charity Bates who lives on the road, the owl has been in the area for several weeks and is abnormally active during the day. "We are not sure if it's a he or she, but we've named it Esther. She's quite a local celebrity as people stop every day to take photos and the school bus even slows down so the kids can take a look at her when they drive past." said Bates. (Russ DillinghamSun Journal via AP)

At the Star Market in Cambridge, Marc Rudkowski was among those practically giddy at the prospect of a weekend snowed in. The 28-year-old machine learning engineer stocked up on French bread and wine, as well as balloons and toys for his puppy, who turned 1 on Friday.

In Maine, where a blizzard warning was issued, Rick Tucker kept busy as customers bought generators, snowblowers, shovels, ice melt, lanterns and other essentials Friday at Maine Hardware in Portland. 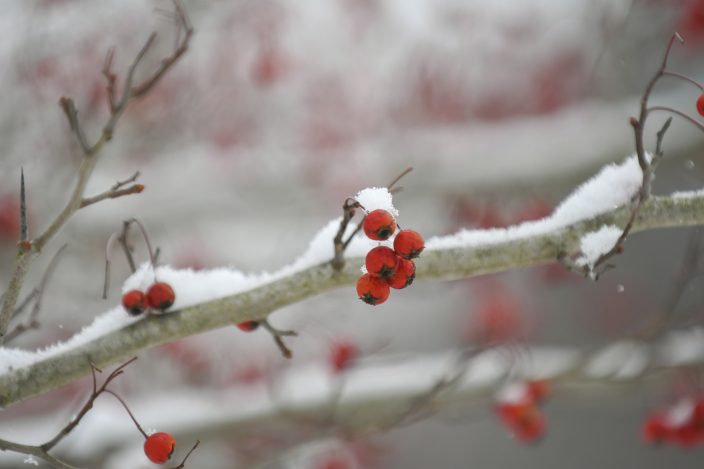 Snow moves into Northeast; a foot possible in many areas

Winter storm blows out to sea, but some areas without power

Winter storm to bring snow, ice across wide swath of US

After the blizzard, the big chill as East Coast digs out

Coast along Virginia and the Carolina's gets snow, ice