In the end, it was a win for NASCAR. Was it “The Best Season Ever," as promised by broadcast partner Fox? No. But NASCAR should pop the champagne — everyone else did.

Its newest Cup Series champion put together one of the best seasons in NASCAR history and capped it with a proper party at Phoenix Raceway, which finally got to fully showcase its $178 million renovation.

The pandemic limited attendance to just over 8,000 at Phoenix a year ago, when the track hosted its first championship weekend. On Sunday, the sold-out track in the desert had 10 times that number spread through the stands, the infield and the tents lining Rattlesnake Hill. 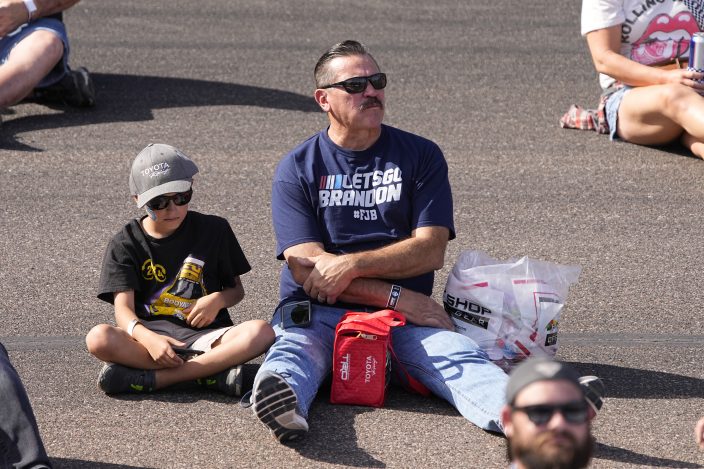 Kyle Larson capped his comeback from a seven-month NASCAR suspension for using a racial slur with a title-clinching win — his 10th this season, the most since Jimmie Johnson in 2007.

The crowd egged on his wife, Katelyn, as she shot-gunned beers on the championship stage. Larson snagged a Captain Morgan cocktail at “The Barn," the at-track party-space dreamed up by Jeff Gordon as a spot where winners can share a post-race toast with fans.

Almost two years later, The Barn at last was rocking.

Truck Series champion Ben Rhodes got slightly intoxicated following his Friday night win. Two nights later, Larson told his wife she needed to pace herself; he himself had vowed not to let the crowd draw him into recreating Rhodes' evening.

“NASCAR fans, they love drinking," Larson said, half a cocktail sitting next to him.

Larson had plenty of partying ahead of him as NASCAR on Monday whisked him to Los Angeles to promote its new champion. The first stop was a NASCAR celebration during the Charlotte Hornets' game against the Lakers.

On Tuesday, Larson will tour the Coliseum to promote NASCAR's newest wild idea: Next season will open with a Feb. 6 exhibition race on a quarter-mile short oval built inside the sprawling venue one week before Los Angeles hosts the Super Bowl less than 10 miles away at SoFi Stadium. Larson, via his new championship, will be the main promoter of NASCAR's charge into the vast media market.

The year wasn't perfect for NASCAR, but by the time the flag flew at Phoenix, the sport at least felt a little back to normal. The campgrounds were filled again and fans roamed the garage bays at Phoenix, where anyone with a ticket could get within a few feet of the cars and stars.

The weekend was NASCAR's biggest event since the 2020 season-opening Daytona 500 before the pandemic.

Larson was suspended all but four races last season for using the slur during an online race. It would have cost him his career had Larson not returned to sprint car racing and also worked off the track to educate himself on social justice issues.

He made it back into NASCAR under the guidance of Rick Hendrick and Gordon, and he's now beloved by racing fans. His past rarely comes up with the focus now on his mind-boggling success.

Gordon, Tony Stewart and Mario Andretti all consider Larson the most talented driver in motorsports right now, and in the grandstands, that's all it takes. The 29-year-old Larson dazzles everywhere, from the biggest stages to the grassroots rural racetracks, and if given the opportunity to drive a race-winning car in the Indianapolis 500, he said he'd try that, too.

Larson will help usher in the overdue Next Gen car, set to debut at the Daytona 500. Much is tied to the success of this car, which was delayed a year because of the pandemic, and NASCAR hopes better competition, new markets and the introduction of new stars will build momentum for a series many saw as dying just a few years ago.

“We are a stronger sport today than we were pre-pandemic. I would argue with anyone who would say otherwise," NASCAR President Steve Phelps said ahead of the finale.

There is work ahead: Phelps said the industry-wide vaccination rate is “not high enough"; he doesn't know if the pandemic has delayed the reconfiguration of Auto Club Speedway outside of Los Angeles; and NASCAR wants nothing to do with the "Let's go, Brandon!" conservative political cry that was derived from a NASCAR race and is now one of the most prevalent slogans sported by spectators at the tracks.

But otherwise, NASCAR waved the final checkered flag on another long season and did it on a high. The right guy won and Larson proved that NASCAR can be a place for second chances.

The next season just three months away.

COLUMN: Another win for NASCAR with drama-free Daytona 500