SOUTH-AFRICA-OBIT-TUTU — Desmond Tutu, South Africa’s Nobel Peace Prize-winning activist for racial justice, has died at 90. Tutu was an uncompromising foe of apartheid, South Africa’s brutal regime of oppression against its Black majority. The buoyant, blunt-spoken clergyman used his pulpit as the first Black bishop of Johannesburg and later as the Archbishop of Cape Town, as well as frequent protests, to galvanize public opinion against racial inequity. He was also a leading advocate for LGBTQ rights and same-sex marriage. By Andrew Meldrum. SENT: 1,450 words, photos. With: SOUTH AFRICA-OBIT-TUTU-QUOTES — Nobel Peace Prize laureate and retired Archbishop of Cape Town Desmond Tutu is being lauded around the world after his death Sunday at age 90. SENT: 880 words, photos. 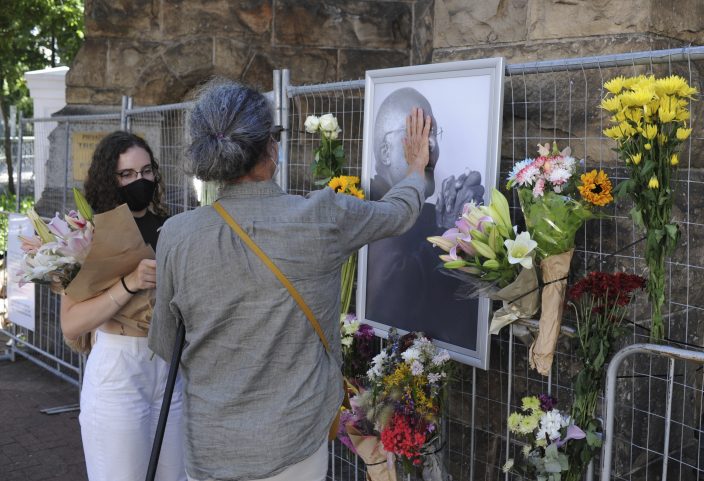 VIRUS OUTBREAK — The latest COVID-19 variant is upending holiday plans for tens of thousands of travelers — but it didn’t do much damage to holiday shopping. Airlines canceled hundreds more flights Sunday, citing staffing problems tied to COVID-19, as the nation’s travel woes extended beyond Christmas. There was no clear indication when normal schedules would resume. But shoppers shrugged off the omicron variant, and holiday sales rose at the fastest pace in 17 years. By Bryan Gallion and Paul Wiseman. SENT: 680 words, photos. Developing.

CONGO-BOMBING-ATTACK — Authorities in eastern Congo are urging churches, restaurants and hotels to step up in security in the wake of the region’s first deadly suicide bombing. The attacker killed five others Saturday night as patrons dined at a restaurant in Beni on Christmas. Beni Mayor Narcisse Muteba, who is also a police colonel, warned owners of popular venues in town that “terrorists” could strike again. By Al-Hadji and Kudra Maliro. SENT: 380 words, photos.

VIRUS OUTBREAK-FUNERAL COSTS — Families who have lost loved ones to COVID-19 can apply for reimbursement from the federal government for up to $9,000 to cover the cost of funeral expenses. The Federal Emergency Management Agency has spent nearly $1.5 billion on funeral reimbursements since Jan. 20, 2020, the date of the first confirmed case of COVID-19 in the U.S. As of Dec. 6, 226,000 people have received money. By Steve LeBlanc. SENT: 840 words, photos. 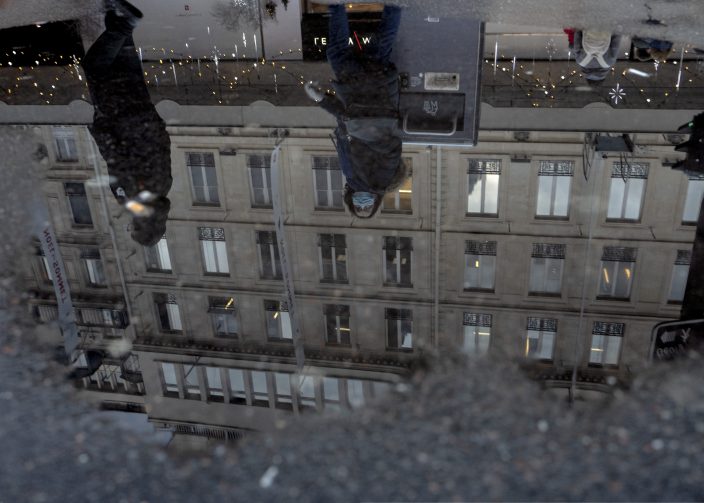 A woman wearing a face mask to prevent the spread of the COVID-19, walks in Paris, Sunday, Dec. 26, 2021. (AP PhotoRafael Yaghobzadeh)

WEST AFRICA-SPIRITUAL TWINS — Twins are seen as both a blessing and a curse in some West African countries, such as Burkina Faso. Twins there are revered for having special powers, like healing the sick, warding off danger, and predicting the future. Eveline Zagre, a mother of twins, says they also make demands in her dreams that she dares not rebuff. By Sam Mednick. SENT: 850 words, photos.

FILM-BOX OFFICE — “Spider-Man: No Way Home” has grossed $1.05 billion globally, making it the highest earner of the pandemic. It’s the first film of the pandemic to cross $1 billion and the second-fastest film ever to do so. SENT: 440 words, photos. 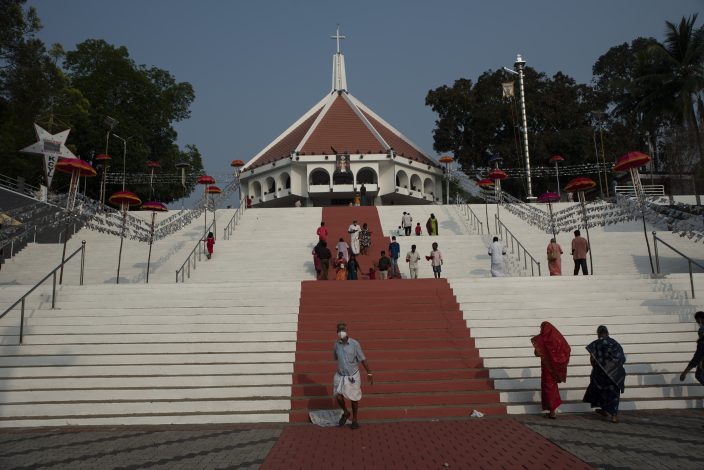 People wearing masks as a precaution against the COVID-19 arrive to worship at a church the day after Christmas in Uzhavoor, Kerala state, India, Sunday, Dec.26, 2021. (AP PhotoR S Iyer)

VATICAN-FAMILIES — Pope Francis has penned a special letter on a Catholic feast day acknowledging that the pandemic has aggravated some family problems but urging couples to seek help. SENT: 530 words, photos.

ODD-PARAKEETS-ANIMAL SHELTER — The son of an animal hoarder called a Michigan animal shelter to say he was surrendering 60 to 80 parakeets from his father’s house. But he showed up with 497. SENT: 250 words.

GREECE-EARTHQUAKE — A 5.2-magnitude earthquake has jolted Greece’s southern islands, but no damage or casualties have been reported so far. SENT: 120 words. 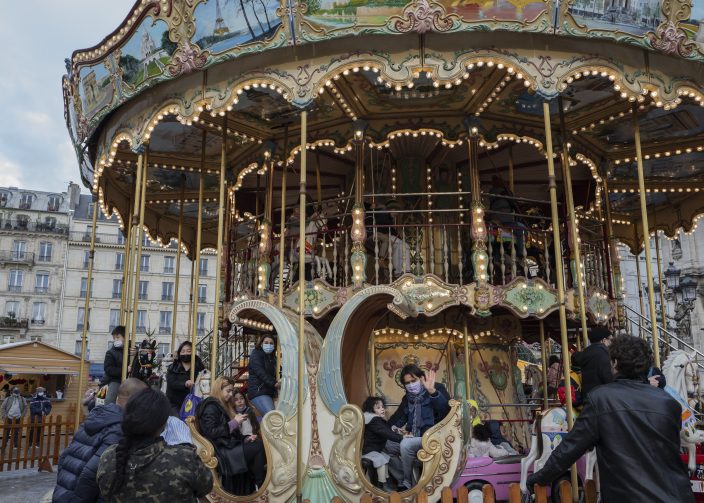 People wearing face masks to prevent the spread of the COVID-19, sit on a carousel in Paris, Sunday, Dec. 26, 2021. (AP PhotoRafael Yaghobzadeh)

CHURCH'S FINAL SERVICE — A central Pennsylvania church with a 221-year history held its final service and is scheduled to close at the end of the year due to declining membership and attendance. SENT: 440 words, photos.

VINTAGE SUBWAY CARS — The celebratory last runs of vintage New York City subway cars could be in jeopardy because of vandalism. SENT: 210 words.

VIRUS OUTBREAK-TREATMENT-EXPLAINER — Newly infected COVID-19 patients have two new treatment options that can be taken at home. But that convenience comes with a catch: The pills have to be taken as soon as possible once symptoms appear. The challenge is getting tested, getting a prescription and starting the pills within five days of the start of symptoms. SENT: 585 words, photos.

VIRUS OUTRBEAK-FRANCE — France recorded more than 100,000 virus infections in a single day for the first time since the pandemic struck and COVID-19 hospitalizations have doubled over the past month. SENT: 230 words, photos.

VIRUS OUTBREAK-BELGIUM — Belgian artists and event organizers have joined together to protest the government’s decision to close down most concerts, cinemas and theaters to stem the spread of the surging omicron variant. The culture industry feels unfairly targeted by the new measures, which were announced Wednesday and took effect on Sunday. SENT: 330 words, photos.

VIRUS OUTRBEAK-ALGERIA — Algeria has started requiring a “vaccine passport” to enter a broad range of public venues. It’s an effort to boost the country’s low inoculation rate and overcome vaccine hesitancy that has left millions of vaccines unused. SENT: 300 words.

WEST-COAST-WEATHER — A major Christmas weekend storm caused whiteout conditions and closed key highways amid blowing snow in mountains of Northern California and Nevada, with forecasters warning that travel in the Sierra Nevada could be difficult for several days. A 70-mile stretch of Interstate 80 was shut Sunday from Colfax, California, through the Lake Tahoe region to the Nevada state line. SENT: 430 words, photo.

MICHIGAN GOVERNOR KIDNAPPING PLOT — Defense attorneys have sought to dismiss the indictment against five men accused of plotting to kidnap Gov. Gretchen Whitmer because of what they describe as “egregious overreaching” by federal agents and informants. The Detroit News reports that defense attorneys filed a 20-page motion on Saturday night. SENT: 280 words, photos.

RUSSIA-PUTIN — Russian President Vladimir Putin says he will ponder a slew of options if the West fails to meet his demand for security guarantees precluding NATO’s expansion to Ukraine. SENT: 550 words, photo.

GREECE-OBIT-PAPOULIAS — Karolos Papoulias, a former president of Greece, has died at the age of 92, Greece’s state news agency ANA reports. Papoulias, a lawyer by training, was close to socialist leader Andreas Papandreou and served in all his governments from 1981-1996, all in foreign affairs positions, ending as Foreign Minister. SENT: 470 words, photos.

MYANMAR — The international aid group Save the Children says two of its staffers are missing in a massacre in eastern Myanmar that left more than 30 people, including women and children, dead and burned in their vehicles after they were reportedly shot by government troops as they were fleeing combat. SENT: 840 words, photos.

MIGRATION-LIBYA-BODIES — Libya’s Red Crescent says at least 27 bodies of Europe-bound migrants, including a baby and two women, have washed ashore in the country’s west. It says the bodies were found late Saturday in two separate locations in the coastal town of Khoms. SENT: 390 words, photos.

AFGHANISTAN — The Taliban have dissolved Afghanistan’s two election commissions as well as state ministries for peace and parliamentarian affairs. A deputy spokesman for Afghanistan’s Taliban-run government says Sunday the country’s Independent Election Commission and Electoral Complaint Commission have been dissolved. He called them “unnecessary institutes for the current situation in Afghanistan.” SENT: 170 words.

ISRAEL-GOLAN — Israel says it plans to double the amount of settlers living in the Golan Heights. The move would further consolidate Israel’s hold on the territory it captured from Syria more than five decades ago. SENT: 350 words, photos.

HOLIDAY SALES — Holiday sales rose at the fastest pace in 17 years, even as shoppers grappled with higher prices, product shortages and a raging new COVID-19 variant in the last few weeks of the season, according to one spending measure. SENT: 780 words, photos.

VIRUS OUTBREAK-COLLEGE SPORTS — The Fenway Bowl and Military Bowl have been canceled due to the pandemic as coronavirus outbreaks at Virginia and Boston College forced them to call off their postseason plans. SENT: 550 words.