Sebastian Aho and Jordan Staal each scored two goals and the Carolina Hurricanes rallied from a pair of two-goal deficits to beat the Buffalo Sabres 5-3 on Thursday night and clinch a playoff berth.

Aho’s go-ahead goal came with 8:21 remaining, propelling the Hurricanes to the 100-point mark (46-17-8) for the just the second time in franchise history. They have 11 games remaining.

Teuvo Teravainen also scored for the Hurricanes, while Staal’s second goal was an empty-netter with 54.3 seconds to play. Antti Raanta stopped 18 for his first victory since March 26. 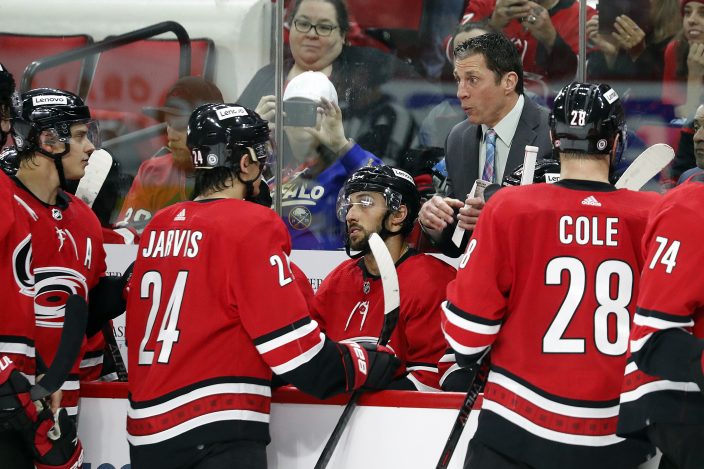 Carolina Hurricanes coach Rod Brind'Amour talks with the team during a timeout in the third period of the team's NHL hockey game against the Buffalo Sabres in Raleigh, N.C., Thursday, April 7, 2022. (AP PhotoKarl B DeBlaker)

Frank Vatrano and Artemi Panarin scored in the second period, Igor Shesterkin stopped 30 shots for his fourth shutout of the season and New York beat Pittsburgh.

Dryden Hunt added an empty-net goal in the final minute and Mika Zibanejad had two assists for New York, which is 6-1-1 in its last eight games — including three victories against Pittsburgh.

With Pittsburgh captain Sidney Crosby a late scratch with a non-COVID illness, the Penguins produced a meek attack against the Rangers. Tristan Jarry had 21 saves for Pittsburgh, which has lost four of five and is 2-5-1 in its last eight.

The Rangers inched closer to their first playoff berth since 2017, moving six points ahead of the Penguins for second place in the Metropolitan Division — and home-ice advantage in the first round —with 10 games remaining.

Roman Josi had a goal and two assists and Nashville erased a one-goal deficit in the third period to defeat Ottawa.

Ryan Johansen scored on the power play at 12:38 of the third period, but it came with some controversy. Josi’s point shot appeared to be knocked down by a high stick from Matt Duchesne before Johansen tapped the puck in. The play was reviewed, but the goal stood to give the Predators the lead.

Duchesne had Nashville’s other goal, and Juuse Saros made 28 saves.

Mathieu Joseph and Josh Norris scored for the Senators, who had their three-game winning streak snapped. Anton Forsberg made 31 saves.

Kale Clague had a goal and two assists, Cole Caufield and Nick Suzuki each had a goal and an assist as part of a three-goal first period and Montreal beat New Jersey.

Christian Dvorak had a goal and two assists, and Chris Wideman, Joel Armia and Jake Evans also scored for the Canadiens. Jake Allen stopped 33 shots to help Montreal win for the second time in three games.

Jesper Bratt, Ty Smith, Tomas Tatar and AJ Greer scored for New Jersey. Andrew Hammond allowed six goals on 19 shots before he was pulled early in the third period. The Devils dropped their fifth straight game, and 10th in their past 12, going 0-3-1 on their four-game homestand.

Travis Konecny added a goal in the third period, Martin Jones stopped 26 shots and Kevin Hayes had a pair of assists for Philadelphia, which has won two of its last three games overall.