While Saints starting quarterback Jameis Winston's season-ending left knee injury has interrupted a promising second chapter of his career, New Orleans has won five of its first seven games without relying heavily on the passing game.

That could help the transition to the next Saints starter going forward — be it Trevor Siemian, who helped the Saints rally to a 36-27 victory over Tampa Bay on Sunday, or Taysom Hill, who went 3-1 in four starts last season but is recovering from a Week 5 concussion.

The Saints ranked second-to-last in the NFL in yards passing per game through their first six contests that Winston finished — and still do (with 180.9 per game) after their latest triumph. 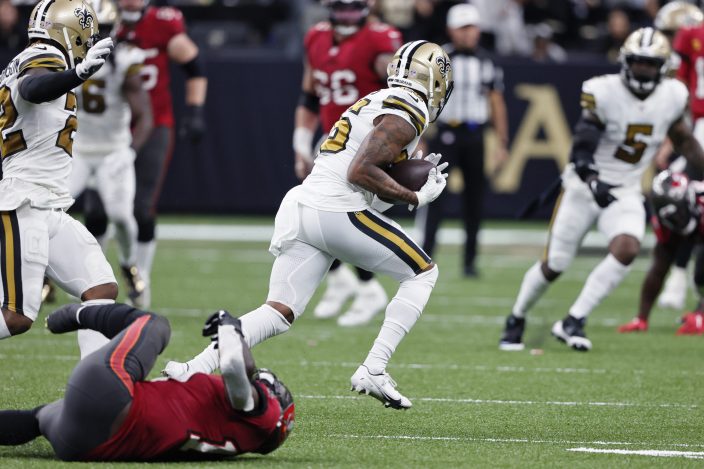 The foundation of their success this season has been their running game, which ranks ninth in the NFL at 125 yards per game, and their run defense, which ranks second with 79.4 yards allowed per game. New Orleans' secondary, meanwhile, has been able to compensate for its bottom-third ranking in yards allowed with opportunistic playmaking, such as a pair of interceptions by C.J. Gardner Johnson and P.J. Williams against seven-time Super Bowl champ Tom Brady.

While Winston periodically displayed the exceptional arm talent to convert deep passes, he was largely called upon to be a game manager. He did a lot of handing off and sought to make sure that when he did throw, he minimized turnovers by eschewing the type of risks he had been prone to take as recently as 2019, when he threw 30 interceptions in his final season with Tampa Bay.

In his first season as a Saints starter, Winston passed for 14 TDs against just three interceptions before his injury on a horse collar tackle during a scramble. 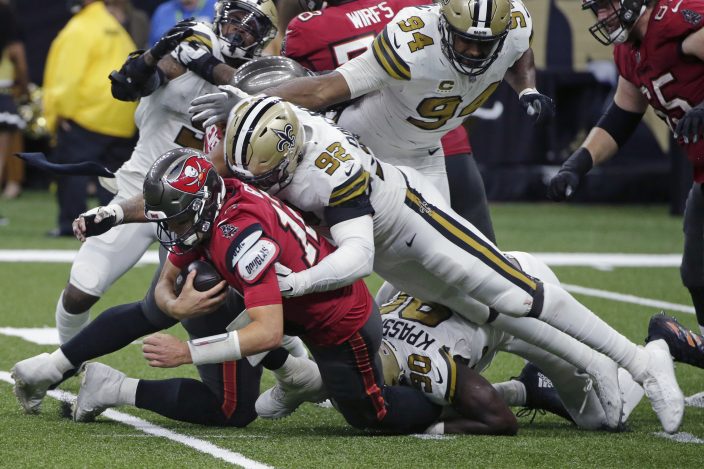 “We definitely were encouraged,” Payton said of Winston's performance this season. “We felt like we saw the arm strength, the leadership, all of those things.”

Although Payton said he wasn't looking to add a new QB through a trade, he wasn't ready to say Monday whether Hill or Siemian would get the nod going forward. He wouldn't even say if Hill has been cleared for practice this week, although he indicated that Hill's prognosis looked promising.

“We’ll keep you posted on that," Payton said. "I know he’s doing well.”

Payton also complimented the way Siemian played when thrust into the limelight against an aggressive Bucs defense that blitzes often.

“There were a number of plays where there was a free (pass) rusher, and the ball was getting out on time,” Payton said. “I thought he played with poise and made good decisions. It’s what you want someone to do when they’re coming into a game without having a lot of work. I thought he handled the situation well.”

New Orleans' running game continues to impress and and was aided by Mark Ingram's return to the Saints. Even taking away the 40 yards that Winston scrambled for before his injury, the rest of the Saints' ballcarriers combined to rush for 112 yards, or nearly 45 yards more than the average of 67.4 yards allowed by the Bucs’ top-ranked run defense coming in. Highlights included Deonte Harris' 22-yard gain on a reverse, Kamara's 15-yard run and Ingram's 11-yard gain.

The Saints' pass coverage against Brady was a mixed bag. Although they intercepted him twice, New Orleans' secondary also gave up 28 receptions for 375 yards and four touchdowns, including scoring strikes of 41 yards to Mike Evans and 50 yards to Cyril Grayson.

There also was a play in which Evans got open behind cornerback Mashon Lattimore and safety Marcus Williams down the right sideline, but Brady overthrew the pass.

Although Siemian had been an NFL starter for two seasons in Denver in 2016 and '17, he hadn't played a meaningful regular-season snap in more than two years before coming through with a series of clutch throws without turning the ball over Sunday.

Siemian now has victories as a starter against the top two passers in NFL history — both in the Superdome. In addition to beating Brady, who ranks first in career yards and touchdowns, he beat now-retired Drew Brees, who ranks second in both categories, when the Broncos upended New Orleans in November 2016.

While C.J. Gardner-Johnson had an interception, he also was largely responsible for covering Bucs receiver Chris Godwin, who caught eight passes for 140 yards and a touchdown.

Gardner-Johnson was the primary defender on Gowdin's 12-yard TD and on Godwin's long gain of 44 yards — a play on which the Saints' top slot defender allowed the catch and missed a tackle.

Hill isn't the only Saints player who could potentially return soon. Tight end Nick Vannett and linebacker Chase Hansen have been designated to return from injured reserve since Oct. 21, which began a 21-day window for New Orleans to either activate them or return them to IR.

8 — The number of turnovers Brady has committed against the Saints' defense in three regular-season games since the ex-New England star moved to Tampa Bay in 2020.

Payton has to determine who'll play quarterback Sunday against the Atlanta Falcons as the Saints seek to win their fourth straight and move into a tie with the Buccaneers atop the NFC South.