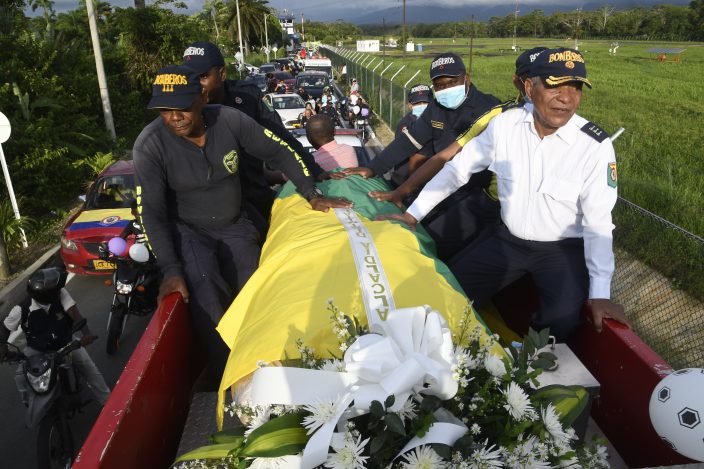 The body of former Colombian soccer star Freddy Rincon is moved atop a fire truck, from the city´s airport to the sports coliseum after arriving at his native Buenaventura, Colombia, Thursday, April 14, 2022. Rincon, a former captain of the Colombian national soccer team who played in three World Cups and also played in Europe for Napoli and Real Madrid, and for Brazils Corinthins, has died after being injured in a car crash. (AP PhotoOswaldo Paez)

THE AP INTERVIEW-RUSSIA UKRAINE WAR-BEASLEY — The head of the U.N.’s World Food Program says people are being “starved to death” in the besieged Ukrainian city of Mariupol, and he predicted the country’s humanitarian crisis is likely to worsen as Russia intensifies its assault in the coming weeks. In an interview with The Associated Press, David Beasley also warned that Russia’s invasion of grain-exporting Ukraine risks destabilizing nations far from its shores and could trigger waves of migrants seeking better lives elsewhere. By Adam Schreck. SENT: 680 words, photos. 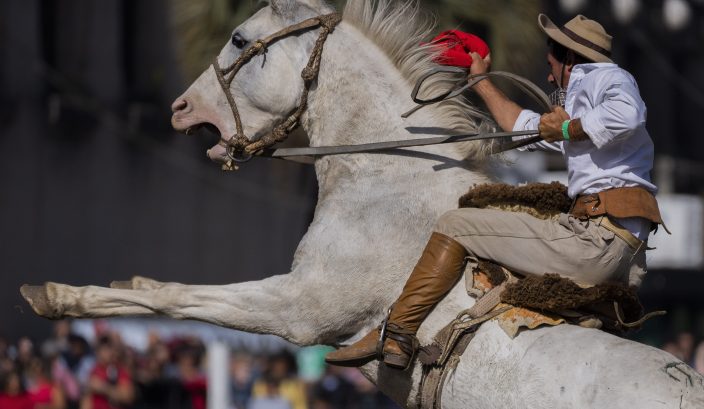 A gaucho rides a horse during the "Criolla Week" rodeo in Montevideo, Uruguay, Thursday, April 14, 2022. Every April since 1925, the Criolla Week Festival is celebrated in Montevideo and gauchos arrive in the city and tame and ride wild horses. (AP PhotoMatilde Campodonico)

RUSSIA-UKRAINE-WAR — On a day that saw Moscow suffer a stinging symbolic defeat with the loss of its Black Sea fleet flagship, Ukraine’s president hailed his people for their resolve since Russia invaded in February and for making “the most important decision of their life — to fight.” By Adam Schreck. SENT: 1,120 words, photos, videos. With RUSSIA-UKRAINE-WAR-THE LATEST.

UKRAINE-WAR CRIMES-PROSECUTOR GENERAL — Ukraine’s Prosecutor General Iryna Venediktova is at the frontline of a legal battle to hold Russia accountable for atrocities committed in her country. The bulk of the investigative work – and probably the largest number of prosecutions – will likely be done by Ukraine . Venediktova has already opened over 8,000 criminal investigations related to the war and identified over 500 suspects. For this formidable prosecutor, the work is personal. “I protect the public interest of Ukrainian citizens. And now I see that I can’t protect these dead kids,” she says. “And for me it’s pain.” By Ericka Kinetz. SENT: 2,100 words, photos, video. An abridged version is also available.

ISRAEL-PALESTINIANS — Israeli security forces entered the Al-Aqsa mosque compound in Jerusalem before dawn as thousands of Palestinians were gathered for prayers during the holy month of Ramadan, setting off clashes that medics said wounded at least 67 Palestinians. By Joseph Krauss. SENT: 840 words, photos.

ELECTION 2022-HOUSE-INCUMBENT V INCUMBENT — Reps. Lucy McBath and Carolyn Bourdeaux flipped two longtime Republican congressional districts in Atlanta’s northern suburbs with a common strategy of appealing to voters repelled by then-President Donald Trump’s divisive politics. As they fight to keep their House seats this year, they again have a common enemy: each other. By Sudhin Thanawala and Will Weissert. SENT: 1,030 words, photos.

CAPITOL RIOT-TRUMP DEFENSE — An Ohio man who claimed he was only “following presidential orders” from Donald Trump when he stormed the U.S. Capitol is convicted by a jury that took less than three hours to reject his novel defense for obstructing Congress from certifying Joe Biden’s presidential victory. By Michael Kunzelman. SENT: 1,060 words, photo.

ATH-AMPUTEE-RUNNER-EVERYDAY-A-MARATHON — Jacky Hunt-Broersma runs like a woman possessed. And in a way, she is: The amputee athlete is trying to run at least 102 marathons in 102 days. Last month, a little more than two-thirds toward her goal of setting a new world record for back-to-back marathons, the South Africa native posted something on Twitter that got people talking. By William J. Kole. SENT; 770 words, photos.

RUSSIA-UKRAINE-FOOD PRICES — The head of the U.N. World Food Program says people are being “starved to death” in the besieged Ukrainian city of Mariupol, and he predicted the country’s humanitarian crisis is likely to worsen as Russia intensifies its assault in the coming weeks. SENT: 680 words, photos.

RUSSIA-UKRAINE-WAR SHIP-GLANCE — Initially christened the Slava, or “glory,” the warship now known as the Moskva in honor of the Russian capital has served in the Cold War, peacetime cooperation with the U.S. and conflicts in Syria and Georgia. Now, the flagship of Russia’s Black Sea fleet is a focus of Russia’s war with Ukraine — where it was built. SENT: 830 words, photos.

VIRUS OUTBREAK-SOUTH KOREA -- South Korea will remove most pandemic restrictions, including indoor gathering limits, as it slowly wiggles out of an omicron outbreak officials say is stabilizing. SENT: 390 words, photos.

VIRUS OUTBREAK-CALIFORNIA-SCHOOLS MANDATES — California is sticking with its coronavirus vaccine mandate for schoolchildren, but it won’t happen until at least the summer of 2023, Gov. Gavin Newsom’s administration has announced. SENT: 820 words, photos.

FROZEN ANIMALS ARREST — An Arizona man faces animal cruelty charges after 183 dead dogs, rabbits, birds and other animals were found in a freezer, including some that were apparently frozen while alive, officials said. SENT: 225 words, photos.

PEOPLE-OPRAH WINFREY — Oprah Winfrey and the Smithsonian Channel are partnering to highlight racial disparities in the health care system through a new campaign and documentary. SENT: 190 words, photo.

CONGRESS-FACIAL RECOGNITION — Two House committees have launched an investigation into the government’s use of facial recognition software that was most recently used by the IRS, but stopped after complaints from lawmakers and privacy advocates. Critics of the software said facial recognition databases could become a target for cyberthreats. SENT: 350 words, photo.

WESTERN-WILDFIRES — Firefighters took advantage of a brief break in the weather but gusty winds were expected to return to southern New Mexico where a wildfire has claimed two lives and charred more than 200 homes. SENT: 610 words, photos, video.

TEXAS-BORDER-DELAYS — The logjam of trucks at the U.S.-Mexico border finally began breaking after nearly a week as Texas Gov. Greg Abbott eased off his latest dramatic action over immigration that has gridlocked some of the world’s busiest trade ports and taken a mounting economic toll. SENT: 890 words, photos.

NORTH-KOREA-BIRTH-ANNIVERSARY — North Korea is marking a key state anniversary with calls for stronger loyalty to leader Kim Jong Un, but there was no word on an expected military parade to display new weapons amid heightened animosities with the United States. SENT: 770 words, photos.

TONGA-VOLCANO — Three months after the world’s biggest volcanic eruption in 30 years, Tonga’s rebuilding is slowly progressing and the impact of the disaster has come into clearer focus. SENT: 760 words, photos.

US-TAIWAN — U.S. lawmakers visiting Taiwan made a pointed and public declaration of their support for the self-governing island democracy while also issuing a warning to China. SENT: 330 words, photos.

NASA-MOON-ROCKET — NASA’s latest attempt to fuel its huge moon rocket for a countdown test was thwarted by a hazardous hydrogen leak, the latest in a series of vexing equipment trouble. SENT: 290 words, photo, video.

MUSK-TWITTER-EXPLAINER — Mercurial billionaire Elon Musk now says he wants to buy Twitter outright, taking it private to restore its commitment to what he terms “free speech.” But his offer, which seemed to fall flat with investors, raises as many questions as it answers. Among them: Is he serious? Can he get the money together? Would a sale make shareholders happy? And what would the social platform look like if he succeeds? SENT: 870 words, photo.

CSX-ACQUISITION — Federal regulators have approved CSX’s purchase of Pan Am Railways, a regional railroad in the northeastern United States that will expand CSX’s network in New England. SENT: 280 words.

SBD--ABUSE ALLEGATIONS — When former members of the U.S. snowboarding team sought help reporting sexual-abuse allegations against a longtime coach, they were unsure of where to turn. The episode has raised questions as to whether the reporting system for sex-abuse cases in Olympic sports is working the way it should some five years since the overhaul. By National Writer Eddie Pells. SENT: 1,200 words, photo.

BBO--SALARIES — The average salary in the major leagues rebounded to $4.4 million on opening day, boosted by a frenzy of free agent signings before and after the 99-day lockout, according to a study of baseball contracts by The Associated Press. By Baseball Writer Ronald Blum. SENT: 740 words, photos.

BKN--HAWKS-CAVALIERS PREVIEW — The Cavaliers are getting a second shot at getting into the playoffs. So is Trae Young. Atlanta’s high-scoring All-Star guard will be THE defensive focal point for Cleveland on Friday night as the Cavs host the Hawks in a win-or-start-vacation game. By Tom Withers. SENT: 890 words, photos.

BKN--PELICANS-CLIPPERS PREVIEW — The Los Angeles Clippers have been a surprisingly resilient bunch this season. The resurgent Clippers take on the New Orleans Pelicans on Friday in an elimination play-in game. The winner earns the No. 8 seed and a first-round matchup with the NBA leading-Phoenix Suns. By Beth Harris. SENT: 820 words, photos.