The European Union has decided against holding a special remote summit of the bloc's leaders on the omicron coronavirus variant for the time being, an official said Wednesday.

The EU's 27 health ministers will first assess the situation next Tuesday before it will be put to the leaders in the Dec. 16 regularly planned summit, an EU official said on condition of anonymity because the meeting hadn't been officially announced.

An emergency summit had been discussed for days, but it was tough to find a time slot for all the leaders. It was also unclear exactly what the leaders could decide while so much remained uncertain about the new variant that was first discovered in southern Africa. 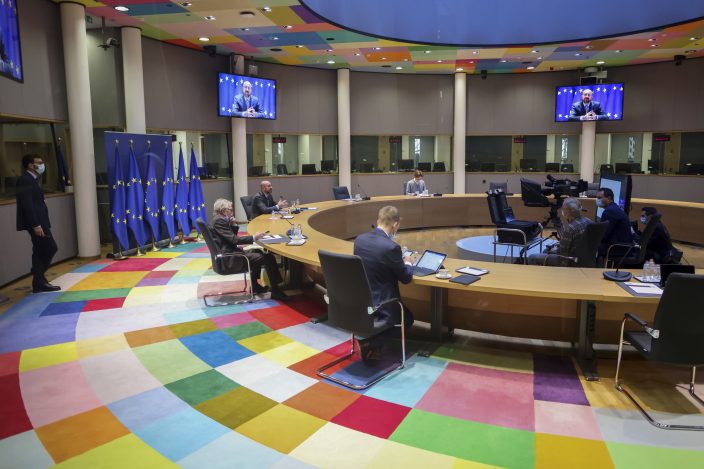 European Council President Charles Michel gives a speech via a video conference during a special session of World Health Assembly at the European Council building in Brussels, Tuesday, Nov. 29, 2021. The World Health Organization warned on November 29, 2021 the new Covid-19 Omicron variant poses a "very high" risk globally, despite uncertainties about the danger and contagion levels of the new strain. (Francois WalschaertsPool Photo via AP)

The EU nations and the European Council will monitor the developments on a daily basis.

As of Tuesday, 44 cases of omicron were reported across 11 EU nations, said the EU’s European Center for Disease Prevention and Control, adding that the majority involved a history of travel to Africa. Outside the EU and southern Africa, omicron infections have turned up in such places as Australia, Canada, Britain and Israel.

Much remains unknown about the new variant, including whether it is more contagious, as some health authorities suspect, whether it makes people more seriously ill, and whether it can thwart the vaccine.

EU leaders to discuss rise of infections, spread of omicron

EU official: Omicron to be dominant variant by mid-January