And the meek shall inherit the first draft pick.

When the Jets visit the Texans on Sunday, there are no playoff implications — or even dreams. Both teams are 2-8, deservedly so.

Yet the winner might eliminate itself from competition for the top overall spot in next April's draft. Consider that Detroit and Jacksonville also are tail-enders with a solid shot at the NFL's worst record, and either the Jets or Texans will move ahead of the other, barring a tie. 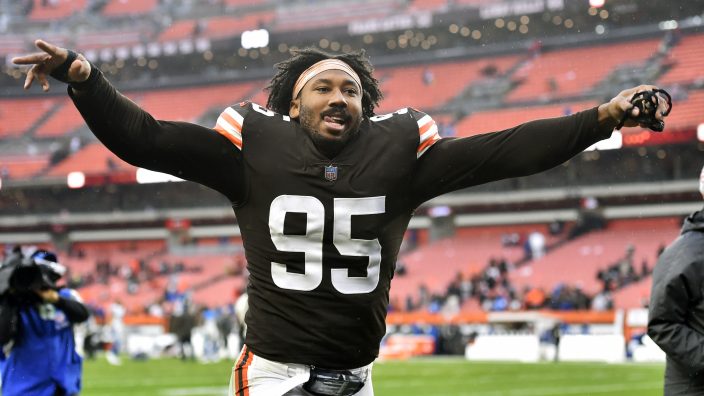 Regardless, neither rookie coach, New York's Robert Saleh nor Houston's David Culley, is looking past the weak opposition this weekend. Because, of course, their clubs are equally feeble.

“We’re 2-8. We played well enough to win, but we didn’t play as well as we need to play moving forward to win," Culley says. "We’re not looking down on anybody.

“It happens to be the Jets; the next team is the most important. You always want the win. You get the win, the thing is to get the win. That’s all we’re thinking about right now.” 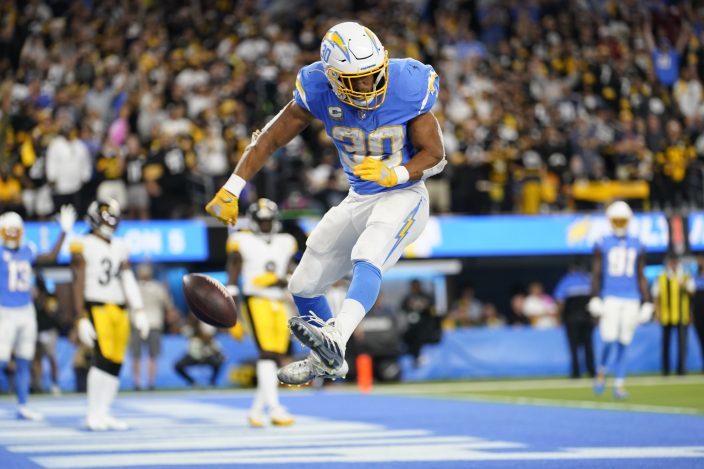 Los Angeles Chargers running back Austin Ekeler celebrates after scoring a touchdown during the second half of an NFL football game against the Pittsburgh Steelers, Sunday, Nov. 21, 2021, in Inglewood, Calif. (AP PhotoAshley Landis)

Houston actually got its second victory last week at AFC South leader Tennessee, which was plagued by injuries and turnovers.

The Jets have a win over the Titans and one over the Bengals, both playoff contenders. Their other showings have ranged from somewhat competitive to downright dismal.

Saleh looks at veteran quarterback Tyrod Taylor as a threat. 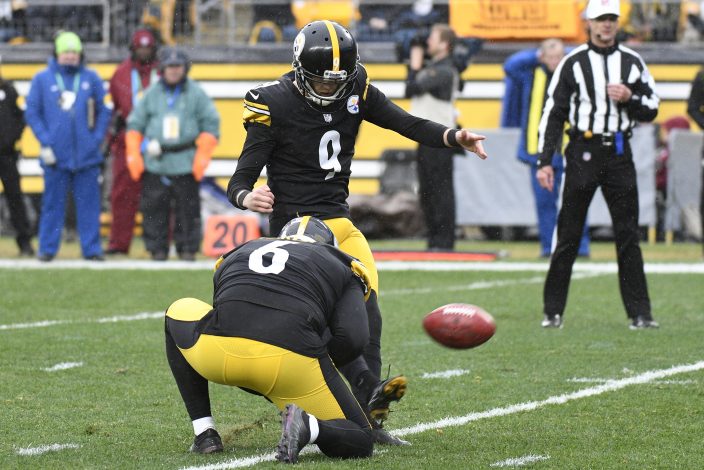 Pittsburgh Steelers kicker Chris Boswell (9) kicks a field goal during the first half of an NFL football game against the Detroit Lions in Pittsburgh, Sunday, Nov. 14, 2021. (AP PhotoDon Wright)

“Tyrod’s back and, you know, when Tyrod’s been the quarterback, they beat Jacksonville. I think they put 37 on them," Saleh notes. “They were 14-14 at halftime with Cleveland in Week 2 before he gets hurt. He comes back against Miami and struggled a little bit, but then they beat Tennessee, so he’s clearly winning — and they’re winning football games with him under center. He is a problem.”

As if the Jets don't have enough of those. Ditto for the Texans.

At the other end of the standings spectrum from the Jets and Texans, two of the contenders for the top spot in the NFC meet at Lambeau Field.

The Rams have lost three straight just once during Sean McVay’s five-year coaching tenure. In Cooper Kupp they have the league's most productive receiver. Kupp has 85 catches for 1,141 yards to lead the NFL in both categories. His 10 touchdown receptions are tied for the lead with Tampa Bay’s Mike Evans.

Aaron Rodgers is bothered by a toe injury, and the Packers are down to a third-string left tackle, Yosh Nijman, because of injuries. But the Packers join the Buccaneers as the only NFL teams that are undefeated at home this season. Green Bay has allowed just 44 points at Lambeau, the lowest total yielded through the first four Packers home games of a season since 1969.

The Titans' impressive winning string ended in the awful weather last weekend, while the Patriots extended their run to five straight wins by routing Atlanta. New England has a profitable habit of meeting opponents who are undermanned, and that could be the case again in this one. No team has come close to the 82 players who have been in at least one contest this season for Tennessee.

Being on the road doesn't seem to bother Tennessee: The Titans are 4-1 away from Nashville in 2021 and 13-3 over their past 16 road games.

The Patriots are allowing a league-low 16.1 points per game. They have finished top 10 in fewest points allowed in each of the past nine seasons, the longest current streak.

Anyone think Tom Brady is smiling at this matchup? Brady has tormented the Colts, going 15-4 with 38 touchdown passes, all with New England. He's second in the NFL with 3,177 yards passing and has a league-high 29 TD passes.

The Colts also lead the NFL with 76 first-quarter points and 98 points off a league-high 25 takeaways.

As the Browns try to find their mojo, they head to the wrong place. The Ravens have dominated this series since the team moved from Cleveland, and Baltimore coach John Harbaugh is 22-4 against the Browns. Cleveland has dropped 10 of the past 13 against Baltimore, with two of the wins coming in overtime.

However, the Browns have replaced the Ravens with the league's most dangerous ground game. And standout right tackle Jack Conklin could be back after missing three games with an elbow injury.

Lamar Jackson should be OK to start after missing the win at Chicago with an illness. In his previous game, he was overwhelmed by Miami's blitzing. Myles Garrett leads the NFL with 13 sacks and the Cleveland club record is 14. The Browns lead the AFC with 29 sacks.

In a scheduling quirk, the AFC North rivals will meet twice in three weeks.

Cincinnati is trying to sweep Pittsburgh for the first time since 2009, but the Steelers are 32-20 at Cincy. The Bengals have won the past two meetings, including a blowout victory two months ago. Before that the Steelers had won 11 straight going back to 2014.

Pittsburgh's Chris Boswell has never missed a field goal against the Bengals (23 for 23) and just one extra point (32 of 33). They'll need Ben Roethlisberger to continue his recently improved performances. The 39-year-old quarterback has a 104.3 passer rating over his past five games, throwing nine touchdowns against no interceptions.

The Bengals have five of their last seven games at home.

Look for a concentration on the run game for both sides. LA's Austin Ekeler is the only player in the AFC with 500 or more rushing yards (573) and 400-plus receiving yards (405). He had four touchdowns last week in the win over Pittsburgh.

Denver's RB duo of Melvin Gordon II and rookie Javonte Williams have combined for 221 carries for 1,036 yards and six touchdowns. Gordon has with five touchdowns, Williams has a 5-yard rushing average.

Not quite a wild-card elimination game, but close enough for late November.

The Vikings have lost 10 of the past 11 road games in the series, with the only win in that span coming in 2007. They've won their past two matches this month and showed, at last, an ability to close. Also, the Vikings are the 18th team since the merger to lead each of their first 10 games by at least seven points.

Early leads will be important against a Niners squad that has come alive behind the work of dynamic receiver/running back Deebo Samuel and tight end George Kittle. The 49ers have opened the game with an 18-play TD drive and 20-play FG drive the past two weeks.

The Giants fired offensive coordinator Jason Garrett this week; his unit, despite some talented skill players, has been abysmal. A sign, sort of, that emphasizes those struggles: tackle Andrew Thomas caught at 2-yard TD pass, becoming the Giants’ first offensive lineman to catch a TD since 1960.

Philly has found the offensive firepower on the ground. The Eagles have 870 yards rushing in the past four games. They’ve rushed for 200-plus yards in consecutive games for the first time since 1978. Last week, Philadelphia rushed 50 times, its most since Oct. 5, 1997, against Washington. With Jordan Howard out, Miles Sanders and Boston Scott should get most of the work, along with versatile QB Jalen Hurts.

Russell Wilson's return from finger surgery hasn't helped the Seahawks. He was 14 of 26 for 207 yards and was sacked four times in the loss to Arizona. Seattle is off to the franchise’s worst 10-game record since 2009.

That said, Seattle’s .711 winning percentage on Monday night is the best in the NFL. The Seahawks have won 11 of their past 14 Monday night games.

Since throwing two picks in a loss at Denver before the bye week, Washington's Taylor Heinicke has completed 77.8% of his passes for 462 yards and four TDs in back-to-back victories. Heinicke put up a career-best 141.3 QB rating in the win at Carolina.

The Falcons have allowed 100 yards on the ground in five consecutive weeks and eight times in 10 games this season. Good news perhaps for Jags RB James Robinson.

The Falcons have won three straight in the series, slightly more than doubling Jacksonville on the scoreboard in those games. The most recent loss is part of the Jaguars’ worst stretch in franchise history against the NFC. Jacksonville has lost 14 consecutive games, 0-3 this season, and is 7-44 in its past 51 games versus the NFC.

Atlanta's gone 130-plus minutes and 26 offensive possessions without a touchdown, going consecutive games without a TD for the first time since 1987.

Another team struggling to stop the run is Miami, which has won three straight anyway. Good news for Panthers Christian McCaffrey, who when healthy is as effective as any NFL running back. Since 2018, McCaffrey has averaged 134.1 yards from scrimmage per game, the most in the NFL. His 11 career 100-yard receiving games are the most by any NFL running back in history, too.

Flags could fly here. Carolina is the NFL’s most-penalized team through 11 weeks, flagged 81 times. The Dolphins have 75 penalties, one more than in all of 2020.