Britain paused Wednesday to remember the thousands of lives lost to the coronavirus in the two years since Prime Minister Boris Johnson plunged the country into its first lockdown with the command: “You must stay at home.”

The strict lockdown imposed on March 23, 2020 shut offices, schools, restaurants, shops and playgrounds, and people who did not work in essential jobs only were allowed outside for exercise and limited tasks. The stringent measures lasted for about three months, and on-off restrictions continued until early this year.

With civic freedoms restored but new confirmed cases rising once again, Wednesday was designated a day of reflection on a pandemic that has claimed almost 164,000 lives in the U.K., the highest COVID-19 death toll in Europe after Russia. 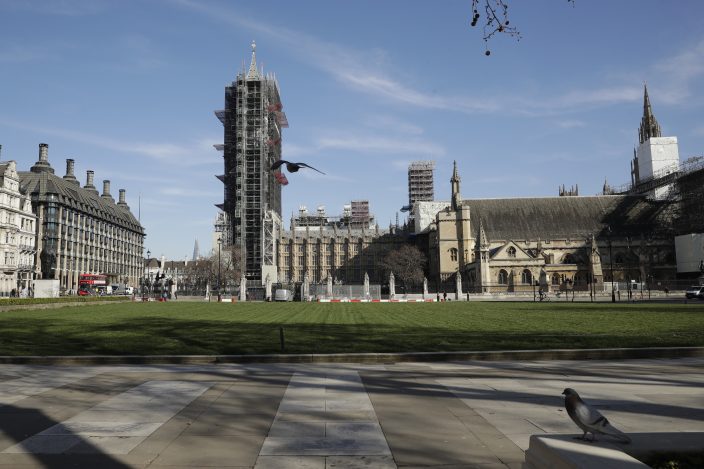 FILE - Parliament Square empty of people though some pidgins still fly around the square, in front of the Palace of Westminster that is being refurbished in London, Monday, March 23, 2020. (AP PhotoMatt Dunham, File)

Britain also had one of the developed world’s deepest economic downturns as the pandemic closed down swaths of the economy.

Members of bereaved families on Wednesday tied yellow ribbons to Westminster Bridge beside Parliament, near a memorial wall for pandemic victims emblazoned with thousands of hand-painted hearts. A minute’s silence was held at noon (1200GMT), and people were encouraged to show flowers or shine a light in their window at 8 p.m.

“Those lost to COVID will never be out of our hearts and minds, and today we reflect as a nation,” Johnson said in a message to mark the anniversary. 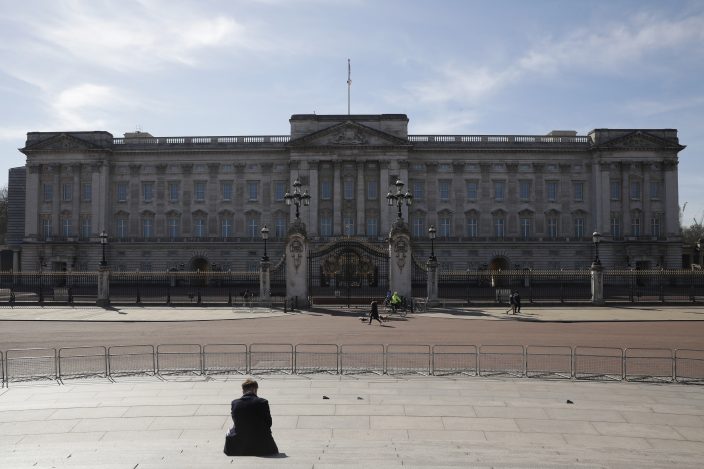 FILE - A lone person sits on the steps of the Queen Victoria Monument as looks at Buckingham Palace in London, Monday, March 23, 2020. (AP PhotoMatt Dunham, File)

Johnson, who was hospitalized in intensive care with COVID-19 in April 2020, said he had seen “first-hand the heroic efforts” of medical personnel. He paid tribute “to them, the grief counsellors, charity workers and friends and families, as we pause to remember those we have lost.”

The government’s opponents and public health experts heavily criticized Britain’s response to the pandemic. They said scientists’ recommendations were not always heeded by a prime minister whose laissez-faire instincts made him reluctant to clamp down on the economy and daily life.

After pressure from bereaved families, Johnson agreed to hold a public inquiry into his government’s handling of the pandemic, led by a retired senior judge. It is due to start hearings within weeks. 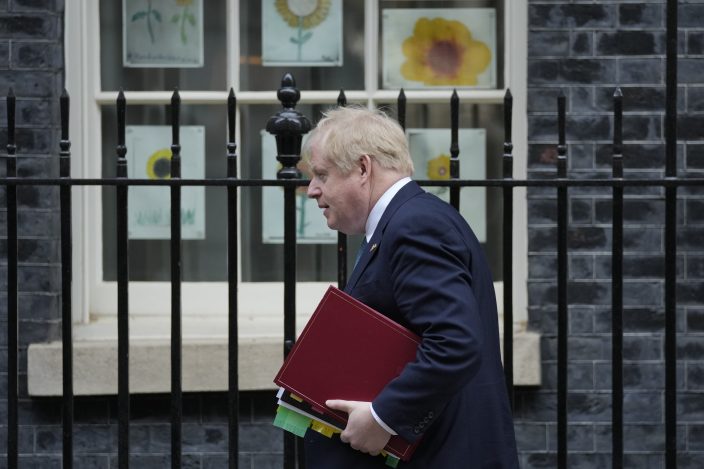 Critics say Johnson was slow to impose a lockdown as a new respiratory virus first seen in China started to spread early in 2020 and claim the delay cost thousands of lives.

Johnson wavered again as infections soared in the fall of 2020 but finally ordered a second lockdown. Weary Britons endured a third lockdown in the early months of 2021, when the more transmissible delta variant put Britain at the epicenter of Europe’s pandemic.

Months of gradually loosening restrictions followed until England lifted mask-wearing rules, mandatory self-isolation for the infectious and other remaining restrictions even as omicron, the most transmissible variant yet, swept in. Scotland, Wales and Northern Ireland have eased up more slowly.

“We got the big calls right during the pandemic,” Johnson insisted in the House of Commons on Wednesday.

Scientists agree that one success was the U.K.'s rapid and widely supported vaccination program. Almost 92% of people age 12 and up have had two doses of a vaccine, and two-thirds have had a third, booster shot. Fourth doses are being given to the vulnerable and those age 75 and over.

Vaccination means that although cases are once again rising in the U.K. — driven by a subvariant of omicron that is even more easily spread — hospitalizations and deaths remain well below previous peaks.

Julie Pearce, chief nurse at the Marie Curie health charity, which organized Wednesday's commemoration events, said the anniversary was an opportunity to reflect and connect with others.

“While life is beginning to return to normal for some people, several million people are still living with the trauma of loss and not being able to grieve properly,” Pearce said. “Let’s take time to connect and show support for the millions of people who are grieving, and remember the family, friends, neighbors and colleagues we’ve lost over the last two years.”

UK to scrap all remaining COVID restrictions next week

Scotland, Wales to offer COVID vaccine to all children 5-11