When November began, the NFC East was all about the runaway Cowboys.

Now in December, it could become about surging Washington (6-6) if it can beat Dallas (8-4) on Sunday.

A division that was won by Washington in 2020 with a 7-9 record will be up for grabs — with even Philadelphia in the mix — should Dallas falter in this rivalry game.

“It’s definitely a critical game,” says Cowboys running back Ezekiel Elliott, who is battling a right knee injury that has limited his production. “They’re playing very good football, I think, what like four wins in a row?”

“And they’re a little banged up but seems like they haven’t really missed much of a beat and they’ve been having good game plans.” 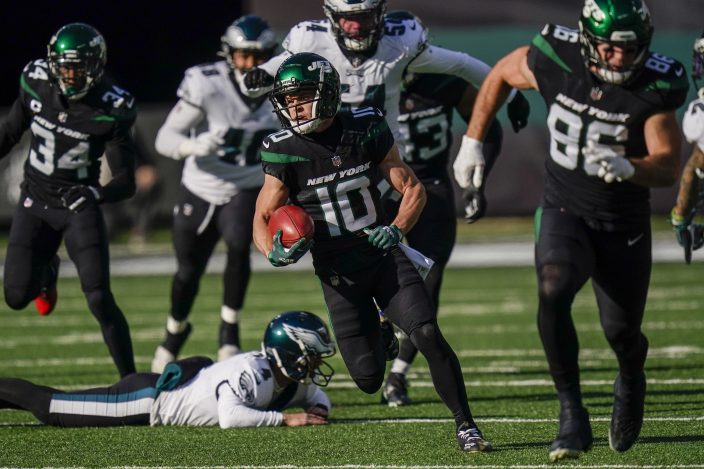 Washington also isn't feeding on the dregs of the league, with wins over Tampa Bay and Las Vegas during its recent streak. That string has occurred even though 2020 Defensive Rookie of the Year Chase Young has been sidelined.

Quarterback Taylor Heinicke looks as if he's earning a future contract in the nation's capital. Proven coach Ron Rivera seems to have his team peaking as it heads to five consecutive division contests to finish the schedule, an NFL first. 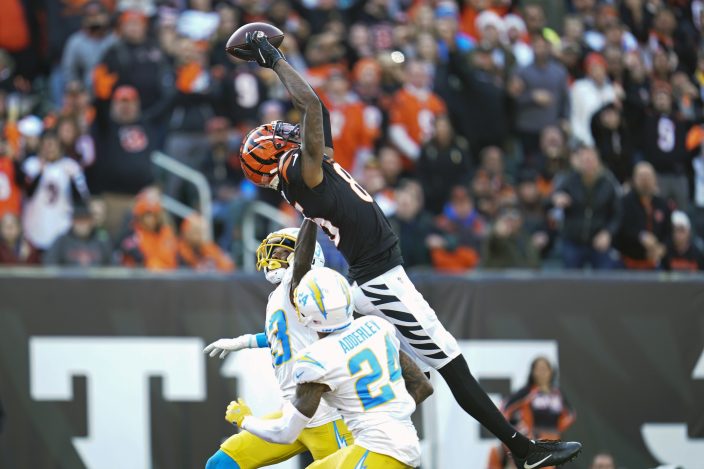 "I do think that when guys believe in something and they really feel they have a chance, all they need is that opportunity. And that’s what we are hoping to create. To get to where we are right now, with the opportunity with the door wide open, now we just got to step through it.”

The action began with Minnesota surviving 36-28 against Pittsburgh on Thursday night.

A win gives the Cardinals their first postseason berth since 2015. They snapped a seven-game losing streak against the Rams earlier this season, part of going 4-0 in the division.

But Rams coach Sean McVay is 8-1 against the Cardinals, and LA has the playmakers on both sides of the ball to make things difficult for Arizona. Cooper Kupp leads the NFL with 1,366 yards receiving and 11 touchdown catches.

The Cardinals will look to establish running back James Conner, who has scored at least one touchdown in six straight games.

Following an awful performance on the field and the sideline for Buffalo in the wind and cold on Monday night, it's fair to question whether the Bills will even make the postseason. A loss here could be very damaging.

Tampa Bay has won three in a row and no quarterback enjoys playing Buffalo more than Tom Brady. He is 32-3 against them and has thrown for 70 TDs and run for two more versus Buffalo.

Brady needs 18 completions to move ahead of Drew Brees (7,142) for the most in league history. He’s two TD passes shy of becoming the first player with 700 TDs passing, including playoffs. And the Bucs could secure a playoff spot with a victory and losses by the Saints and Panthers.

Two contenders for wild-card playoff slots who come off losses.

San Francisco forced four fumbles at Seattle, yet fell. The NIners lead the NFL with 18 forced fumbles. Two keys to stopping them: The 49ers rank second in the NFL in gaining 6.31 yards per play on first down and have converted a league-best 77.4% of red-zone drives into touchdowns.

Bengals quarterback Joe Burrow is nursing a damaged finger, but will play. The Cincinnati offense is third in red-zone TD rate (69.7 percent). Tee Higgins has emerged as another playmaker for Burrow. He had nine catches for 138 yards and a touchdown last week against the Chargers, and six receptions for 114 yards and a touchdown the previous week vs. the Steelers.

Hey, didn't these guys just duke it out two weeks ago?,

Yep. Indeed, this is the first time Cleveland, coming off a bye, has faced the same opponent in consecutive games in the regular season since 1957, when the Browns split a pair with the Eagles.

Ravens coach John Harbaugh is 23-4 against Cleveland, including 11-2 at FirstEnergy Stadium. Since 1950, only Hall of Fame coach Chuck Noll (25-21) has more victories against the Browns. And Baltimore has won four straight and 11 of 14 against the Browns since 2014. Plus, the Ravens’ 14-3 record in December since 2018 is the NFL’s best for the month.

Both offenses are struggling. The Browns haven’t scored more than 17 points in six of the past seven games. Baltimore has been held under 20 points in five of its past six games, going 3-3 in that span after a 5-1 start.

Another chance for Aaron Rodgers to show the Bears “I still own you,” as he yelled after he beat them in Chicago in October. The Packers have gone 22-5 against the Bears in games Rodgers has started. In one of the five losses, Rodgers left with an injury after the Packers’ opening series.

“I feel good about being able to leave this at some point with us ahead, which you never know, it’s been an ebb and flow in this rivalry, and it’s been fun to get back ahead in the all-time series,” says Rodgers, referring to Green Bay's 102-95-6 mark in the league's oldest rivalry.

The Bears, who have dropped six of seven, should have rookie quarterback Justin Fields back from broken ribs.

The Chiefs go for a sixth straight victory, and taking on a sieve of a secondary like the Raiders have could provide a boost to a somewhat sputtering attack. Patrick Mahomes had another difficult game against Denver, throwing for 184 yards with an interception and no TD passes. The Las Vegas pass defense is allowing just over 230 yards per game. Mahomes threw for 406 yards with five touchdowns and no picks in a 41-14 win for Kansas City earlier this season.

The Chiefs have won seven of the past eight in the series. Las Vegas, losers of four of the past five outings, is 6-0 when Derek Carr throws for at least 300 yards and 0-6 when he doesn’t.

Can't be a much better way to come off a bye than facing the lowly Jaguars. Tennessee hopes to be healthier, too, but the Titans have 18 players on injured reserve, and standout safety Kevin Byard on the COVID-19 list. They have used an NFL-high 86 players.

The Titans have won four straight and eight of the past nine against the Jaguars. They also have won seven straight in Nashville.

Only four players on Jacksonville’s roster even have wins at Nissan Stadium, and none of them came with the Jaguars. Receiver Tavon Austin, defensive tackle Malcom Brown, running back Carlos Hyde and defensive end Jihad Ward are the lone Jaguars with wins in Nashville.

Both sides have concerns about who won't be available. Chargers receivers Keenan Allen and Mike Williams and cornerback Chris Harris Jr. are in COVID-19 protocol. All three could test out before Sunday and play.

Giants QB Mike Glennon (concussion protocol) is expected to start as long as he is cleared. If Glennon can't play, Jake Fromm would likely see his first regular-season reps. Starter Daniel Jones remains sidelined because of a neck injury, and several other key offensive players are questionable.

The Chargers have won four straight against the Giants, who have lost their past four games this season on the road. They will be guaranteed a fifth consecutive losing record with a defeat.

For the Lions to get another win after securing their first against Minnesota — thanks, Vikings, for that absurd defensive scheme on the final drive — they will need to stop the run. Rookie RB Javonte Williams has emerged for Denver and Detroit’s run defense ranks 28th, allowing 131 yards a game.

Keep an eye on Denver rookie cornerback Patrick Surtain II, who has three interceptions in his past two games and four overall. He leads all rookies with a dozen pass breakups, has a pass breakup in eight consecutive games, the longest active streak in the NFL.

This is just the third time since 2017 the Broncos are favored by more than a touchdown.

With New Orleans getting back its top offensive player, running back Alvin Kamara, maybe the Saints can end their first five-game slide since the 2005 season, the year before Sean Payton was hired as coach. New York allowed 418 total yards in a loss to Philadelphia, the sixth time this season the Jets have given up at least 400 in a game. Yes, that's Kamara smiling.

New York's best chance might come on special teams. Braxton Berrios ranks first among players with 15 or more kickoff returns with a 28.9 average, helped by his 79-yard return on the opening kickoff last Sunday. He’s also among the league leaders with a 13.6 average on punt runbacks.

Like a few teams in 2021, the Falcons enjoy road trips more than home cooking. The Falcons are 5-2 away from home, including a win over the Jets in London; the Panthers are 2-4 at home.

The Panthers have not won at Bank of America Stadium since beating the Saints 26-7 on Sept. 19. QB Cam Newton has lost his past 10 starts for Carolina.

The Seahawks certainly have learned how to handle early games. Handling the Texans might not be much of a chore, either.

This will be the second 10 a.m. PST kickoff of the season for Seattle. The Seahawks are 20-7 in their past 27 games in that situation, including wins in 12 of the past 13.