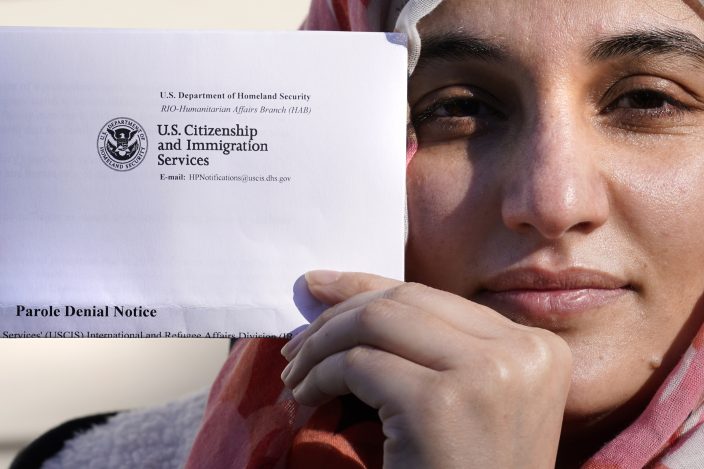 Haseena Niazi, a 24-year-old from Afghanistan, holds a parole denial notice she received from the Department of Homeland Security, while posing outside her home, Friday, Dec. 17, 2021, north of Boston. Niazi received the letter from the federal government denying her fiancé's humanitarian parole application earlier in the month. Her fiance, who she asked not to be named over concerns about his safety, had received threats from Taliban members for working on women's health issues at a hospital north of Kabul. (AP PhotoCharles Krupa)

MYANMAR-MILITARY MASSACRES — The Myanmar military is reverting to a strategy of massacres and scorched-earth tactics like the burning of villages as weapons of war, according to an AP investigation. The military’s growing violence appears to be a response to local resistance forces springing up across the country, but it is wiping out civilians and entire villages in the process. By Sam McNeil, David Rising and Rishabh R. Jain. SENT: 2,600 words, photos.

BIDEN-PUTIN — President Joe Biden and Russian President Vladimir Putin are set to discuss the Russian troop buildup at the Ukraine border on Thursday, holding their second call in recent weeks as little progress has been made toward ending the smoldering crisis. By Aamer Madhani. SENT: 700 words, photos. DEVELOPING: Will be updated after 3:30 p.m. call.

CAPITOL RIOT-WEAKENING THE GUARDRAILS — Supporters of Donald Trump are trying to remove some of the guardrails that stopped him from overturning the 2020 presidential election. Trump is targeting closely contested states where key Republicans refused to go along with his plans to declare that he defeated Democrat Joe Biden in the White House race. By Nicholas Riccardi. SENT: 1,810 words, photos. Abridged version also available.

IMMIGRATION-AFGHAN PAROLE — Federal immigration officials have turned away hundreds of Afghans seeking temporary entry into the country for humanitarian reasons. Immigrant advocates say the Biden administration has failed to honor its promise to help Afghans who were left behind after the U.S. military withdrew from the country and the Taliban took control. By Philip Marcelo and Amy Taxin. SENT: 1,000 words, photos.

GEORGE FLOYD-POLICE REFORMS — Democratic lawmakers in California, Maryland and Washington passed far-reaching policing reforms this year in response to the 2020 killing of George Floyd in Minnesota. But the first full year of state legislative sessions since the killing sparked a summer of racial justice protests produced a far more mixed response in the rest of the country. By Colleen Slevin. UPCOMING: 1,200 words by 10 a.m., photos.

ABORTION AND ADOPTION — Year after year, several thousand women in the U.S. carry an unintended pregnancy to term and then offer the baby for adoption. It’s a choice commended by many foes of abortion. Yet despite a huge demand for babies from Americans yearning to adopt, perhaps 40 times more women opt for an abortion. By David Crary and John Hannah. UPCOMING: 1,200 words by 10 a.m., photos.

BUSINESS MANAGER KILLED — A Los Angeles business manager whose clients included Nicki Minaj and the Kardashians has been killed, and her boyfriend has been charged with murder. SENT: 200 words.

OBIT-BUFFALO SOLDIER — Steve Lewis, a World War II veteran who was one of the last living members of an all-Black cavalry regiment, has died in Florida. He was 99. SENT: 220 words.

BOOKS-AMANDA GORMAN — Amanda Gorman is ending her extraordinary year on a note of hope. The 23-year-old poet has released a new work to mark the end of 2021. SENT: 370 words, photos.

VIRUS OUTBREAK-THREE DEAD — A county coroner says autopsy results in the death of three siblings at a home near Johnstown, Pennsylvania, indicate they all died from COVID-19. SENT: 150 words.

VIRUS OUTBREAK-WORLD JUNIORS — The remainder of the world junior hockey championship in Canada is canceled over fears of a COVID-19 outbreak. SENT: 580 words, photos.

HONG KONG — Hong Kong police have formally charged two people from an online pro-democracy news outlet with sedition, a day after the outlet said it would cease operations following a police raid on its office and seven arrests. SENT: 290 words, photos.

NORTH KOREA-KIM'S ANNIVERSARY — North Korea has urged its 1.2 million troops to unite behind leader Kim Jong Un and defend him with their lives, as the country marked the 10th anniversary of Kim’s ascension to supreme commander of the military. SENT: 340 words, photos.

DENVER SHOOTINGS — A man accused of killing five people in a rampage in Denver is believed to have written fictional books self-published online that named some of his real-life victims and described similar attacks. SENT: 820 words, photos.

CONVENIENCE STORE SHOOTING-TEXAS — Dallas-area police charge a 14-year-old with capital murder in a triple killing at a gas station and warn that the boy is at-large, armed and dangerous. They say his father was the get-away driver. SENT: 400 words, photo.