Andy Reid has won a Super Bowl. So has Mike McCarthy.

When the two coaches meet Sunday as Reid's Chiefs host McCarthy's Cowboys, they recognize that a victory could be extremely helpful in getting them to another big game.

They also understand what a big chore winning could be. 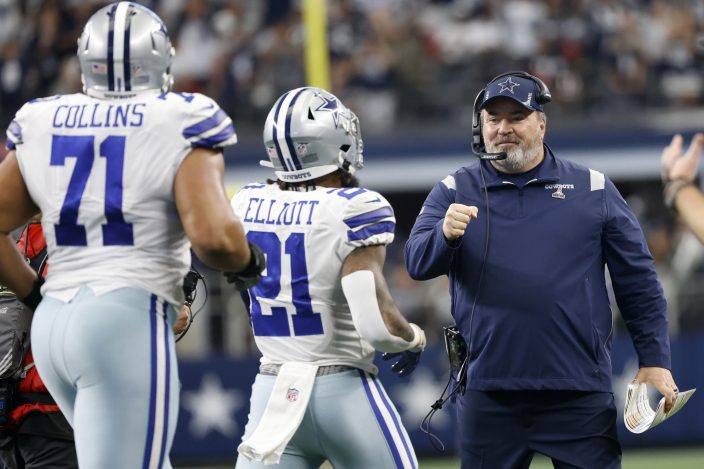 Dallas Cowboys' La'el Collins (71) and Ezekiel Elliott (21) celebrate with head coach Mike McCarthy, right, after Elliott scored a touchdown in the first half of an NFL football game against the Atlanta Falcons in Arlington, Texas, Sunday, Nov. 14, 2021. (AP PhotoRon Jenkins)

“You’re talking about a defending champion here, absolutely,” McCarthy said of the Chiefs (6-4). "These guys are extremely well coached. I have great respect for Andy Reid, for the way he’s done for it for decades in this league.

"This is an important game. It’s an uncommon opponent, so we’re going to spend a little more time ... in the classroom, in the walkthrough part of it. We feel like we need more time on the video together.

“It’s about getting a road win. I think we know where we are. And I know where they want to go. So you’re going to see a clash of two really good football teams Sunday afternoon.” Indianapolis Colts running back Jonathan Taylor (28) runs against the Jacksonville Jaguars in the first half of an NFL football game in Indianapolis, Sunday, Nov. 14, 2021. (AP PhotoAJ Mast)

No argument there. Dallas (7-2) is in prime position to earn the top NFC seed and the only playoff bye. Kansas City might need to win out to get the AFC's bye, and the Chiefs have been far more inconsistent in 2021 than in recent years.

“Listen, I think you see it in this league every Sunday that teams are getting beat that aren't favored to get beat,” Reid says. "So from my standpoint as a coach, every day is important for you, your preparation, how you handle it mentally. Do you let yourself get carried away what happened against the Raiders (a huge win), or do you bear down and get yourself right for the Cowboys coming in here?

“We have to make sure we take care of our business.” 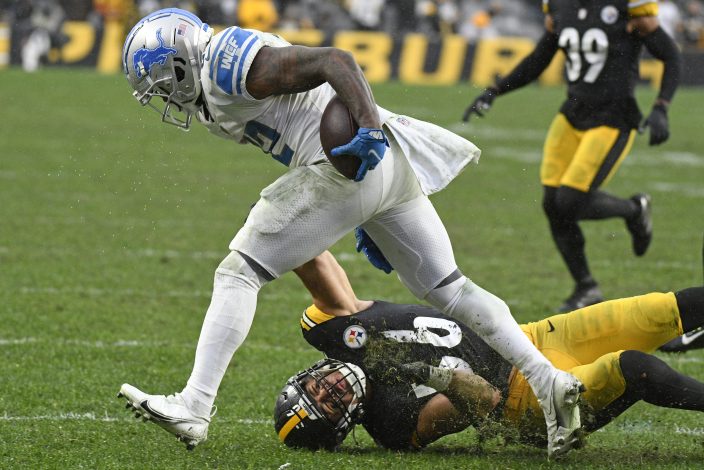 Detroit Lions running back D'Andre Swift, top, gets past Pittsburgh Steelers outside linebacker Alex Highsmith (56) during the second half of an NFL football game in Pittsburgh, Sunday, Nov. 14, 2021. (AP PhotoDon Wright)

The week's business began with New England's defense dominating Atlanta in a 25-0 win on Thursday night. Kyle Van Noy had two sacks and capped a brilliant defensive performance with a 35-yard interception return for a touchdown off Falcons backup QB Josh Rosen. Matt Ryan was sacked four times and intercepted twice. Mac Jones threw a 19-yard scoring pass to Nelson Agholor for the game's only touchdown as the Patriots (7-4) won their fifth straight. Atlanta (4-6) was shut out for the first time since 2015. 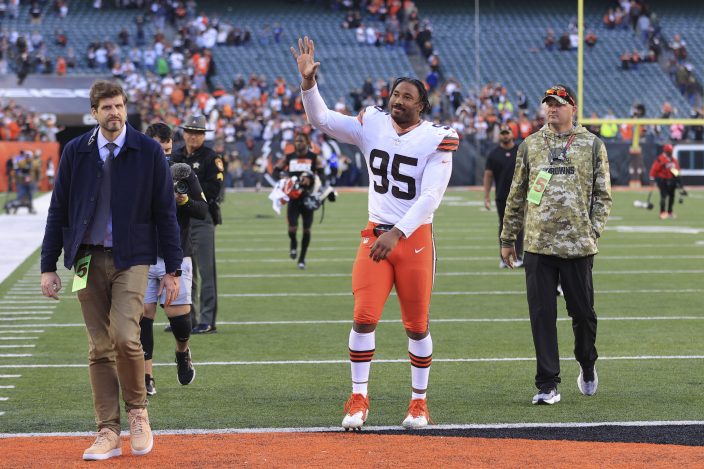 The Colts have climbed back to respectability after an 0-3 start as the running game with Jonathan Taylor has come alive. He's topped 100 yards from scrimmage and scored a touchdown in each of his past seven games, the NFL’s third-longest such string behind Lydell Mitchell and LaDainian Tomlinson, who each had eight-game runs.

Buffalo annihilated the Jets last Sunday. All five members of the starting secondary had a takeaway, including safety Micah Hyde forcing and recovering a fumble.

Indy leads the league in points off takeaways (77). Buffalo is second at 74.

Things got very ugly for Lamar Jackson and the Ravens in their loss on Nov. 11 at Miami, which blitzed like mad and Baltimore was held under 14 points for the first time in 52 games. Chicago's defense is capable of such aggressiveness.

Still, the Ravens have won 12 straight games vs. NFC opponents, the NFL’s longest active interconference winning streak. Jackson has either a rushing or passing TD in 45 straight games, the longest active streak by a QB, his 10 career 100-yard rushing games are tied with Michael Vick for the most in the regular season.

The Bears have lost four straight, the third straight year they’ve dropped at least four in a row under coach Matt Nagy.

The Lions are getting closer and, objectively, should have won at Pittsburgh. Their running game with D'Andre Swift has come on: The second-year pro had career highs with 130 yards rushing and 33 carries last week. Swift has a career best with 50 receptions and 420 yards receiving, leading all running backs in receptions and ranking second in yards receiving.

Defense could play a major role. Green Bay's has come around, and hasn't allowed a 100-yard receiver in four weeks. The Packers come off a 17-0 win over Seattle.

The Vikings held the Cowboys and Chargers to under 100 rushing yards, and Green Bay will be missing injured running back Aaron Jones.

A Philly win would put it smack in the middle of the wild-card chase, and to get it, the Eagles might need to handle what New Orleans does best: defend the run. The Saints rank first, allowing 72.9 yards per game. The Eagles are third in rushing, averaging 144.3 yards per game. Led by dual-threat quarterback QB Jalen Hurts and running backs Jordan Howard and Boston Scott, the Eagles surpassed 175 yards rushing in three straight games, including 200-plus in both of their victories. Overall, they have 626 yards rushing in the past three games, an average of 208.7 per game.

And they could get back top RB Miles Sanders from injury.

The AFC's top-rated team against the conference's tail-ender. Tennessee is off to its best start since opening the 2008 season 10-0. The six-game winning streak is the NFL’s longest active, with the past five wins against 2020 playoff teams.

The Titans also are 14-7 inside the AFC South since Mike Vrabel was hired as head coach in 2018. Vrabel had been the Texans defensive coordinator.

Houston’s eight-game slide is its longest since dropping the final 14 games of the 2013 season.

A huge game for both teams in their divisional races and overall in the AFC. Both dropped their previous two outings.

This could be won in the trenches, with matchups such as Raiders DE Maxx Crosby against Bengals T Reilly Reiff a key. Crosby leads the NFL with 63 pressures and had four sacks in his previous game against the Bengals.

Cincinnati has its own pass-rushing force in DE Trey Hendrickson, who has 8 1/2 sacks.

Strangely, the Cardinals have done well in Seattle even though the Seahawks generally have been the better team for a decade. As they try to improve to 6-0 on the road this season, they also seek to add to more road wins at Lumen Field (eight) than any other NFL team since the stadium opened in 2002.

Their chances will be significantly enhanced if QB Kyler Murray and WR DeAndre Hopkins are back after missing two games with injuries. But the Seahawks since 2012 are 36-12 following a loss, the best winning percentage in the league. They were blanked 17-0 by Green Bay last week, the first shutout loss in Russell Wilson's career. He was just back from finger surgery.

Here's an another oddity, particularly with Ben Roethlisberger's status uncertain as he deals with COVID-19: Pittsburgh’s past two road wins against the Chargers have come with backup quarterbacks. Michael Vick won in San Diego in 2015 and rookie Devlin “Duck” Hodges got the victory in Los Angeles in 2019.

The Steelers come off the tie with winless Detroit and couldn't stop the run. Chargers versatile running back Austin Ekeler could benefit from that.

Tom Brady slumping? Well, the Bucs have lost their past two and Brady has not been dominant either time. The 44-year-old, seven-time Super Bowl champion leads the NFL with 27 touchdown passes, but threw a pair of interceptions in each of the past two games, road losses at New Orleans and Washington. He’s been superb at home, though, with 1,277 yards passing and 18 TDs with two interceptions in four games.

If Brady returns to form — do you doubt it? — this could be a shootout. New York comes off a bye, is getting healthier on offense, and quarterback Daniel Jones is improving. He'll face a depleted secondary that has been missing starting cornerbacks Sean Murphy-Bunting and Carlton Davis for most of the season; Richard Sherman was placed on injured reserve this week; and backup Dee Delaney left last week’s loss with a concussion.

Ron Rivera was such a success coaching the Panthers that he brought them to a Super Bowl, a loss to Denver. His quarterback was Cam Newton, the league's MVP that 2015 season.

They meet Sunday, Rivera in charge of Washington and Newton back with Carolina — and likely to start.

“I think it’s an opportunity for him to go back home, to pick up where he started off," Rivera says. "It’s kind of a cool deal.”

They rarely play, but the Niners have won three straight in the series, averaging 43 points in the past two and San Francisco is 3-1 on the road this season and 15-5 since 2019. Meanwhile, Jacksonville has lost 13 consecutive games against the NFC, including 0-2 this season, and is 7-43 in the past 50 games versus the NFC.

Two players to watch: Jags DE Josh Allen has 13 solo tackles, including three sacks, an interception and a fumble recovery in the past three games. 49ers WR Deebo Samuel, who also has been a primary playmaker in the run game, had five catches for 97 yards and a TD and five carries for 36 yards and a score last week. He's closing in on 1,000 yards receiving.

These AFC East non-contenders have played 111 times, including an AFC title game for 1982 won by Miami, and the series is tied 55-55-1. The Dolphins have won six of the past seven meetings and could reclaim the series lead for the first time in just over 21 years. Average score of the first 111 games of the series: Dolphins 22, Jets 21.

New York's defense has been awful, with 175 points allowed in the past four games for the second-highest total by any team since the 1970 merger. Miami's offense tends to be a slog, but could profit here.